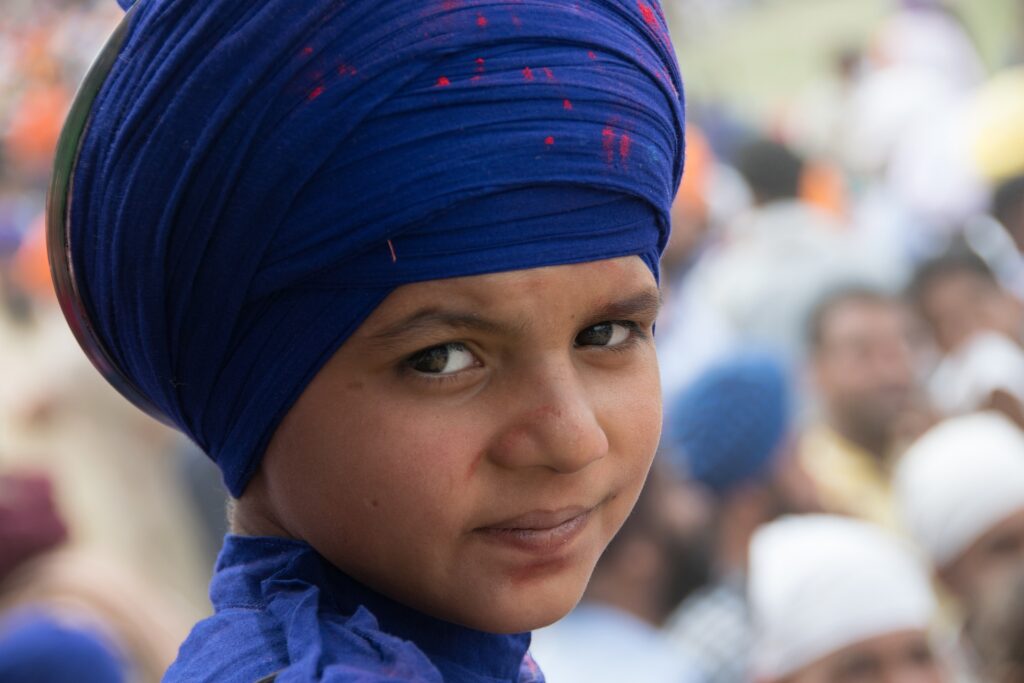 This isn’t how I’d typically spend the morning of Easter Sunday. I’d usually be indulging in a chocolate Easter egg at this point, or at one point in time, watching a church service.

Today, I find myself sitting cross-legged on a thick cream-coloured mat on the floor of a large room. A silver tray lies in front of me, covered in a variety of vegetarian curries whose names and components I can only guess at. I scoop awkwardly at them with a naan (flatbread) as my only utensil. The soft-pink scarf perched haphazardly on my head starts to slip and I grab at it to prevent it from tumbling off completely. My fiancé sits beside me, as unfamiliar with protocol as myself, while strangers mirror us on the other side of the room, looking silently down at their trays as they eat with accustomed ease.

I’m at a Gurdwara, a place of assembly and worship for Sikhs. More specifically, I’m in the Langar Hall, where free vegetarian meals are served by volunteer Sikhs to anyone who visits. I’m not in India, though I’ve had that overwhelming and vibrant country on my ‘must visit’ list for a while now. Instead, I’m in the small coastal town of Woolgoolga, around six hours drive north of my home in Sydney, Australia, impatiently waiting out the global pandemic.

After a year of being confined to my home state of New South Wales, I’m desperate to experience another culture. It was this desperation that saw me eagerly scoop up a pamphlet for the Sikh Heritage Museum of Australia when I spotted it on display at the (locally) famed Big Banana Fun Park at Coffs Harbour the day before.

Despite this eagerness, standing outside the museum earlier this morning I’d felt a slight sense of trepidation about how we’d be received. Would we be welcomed, or would we be looked upon as outsiders? I was relieved to find it was the former, as a volunteer quickly rushed over and greeted us with a broad smile. A moment earlier he had been chatting to a few other guests in what I guessed was Punjabi, the language spoken by Sikhs in the Punjab region of the Indian sub-continent where the religion originated. Dressed in a long, light-blue flowing shirt and pant combination (called kurta pajama) and complete with a black turban and bushy beard, I was surprised to hear a clear Australian accent pass through his lips when he spoke to us.

“Many of the Sikh families living in Woolgoolga today have been here for five or six generations,” he explained.

Sikhism is the world’s fifth-largest religion and yet somehow, as I soon realised, I knew absolutely nothing about it. Between the friendly volunteer’s succinct overview and a perusal of the many plaques adorning the white walls of the small, neatly organised museum, I began to develop a picture in my mind of a relatively young religion (Sikhism was established around 500 years ago) largely based around egalitarianism and service.

By the time I’d completed a lap of the museum, I could already feel my spirits had lifted a little, a soft smile grazing my lips as I stood on the front steps, watching as Sikhs entered and departed from the Gurdwara across the road. Just as we were about to leave, the friendly volunteer ran over and asked if we’d like to sit in on the hymns and stay for Langar.

“The food is for everyone,” he said. “It’s about showing everyone is welcome, with open arms,” he gestured with his own arms to illustrate the metaphor.

We gladly accepted and excitedly crossed the road to the Gurdwara, where we found a large box by the lower entrance that held scarfs to cover our heads while we were inside. We each chose one, staring blankly as we turned it one way, then the other, and then tried in vain to tie it on our heads securely.

With scarfs precariously held in place, we left our shoes with the dozens of other pairs by the entrance and followed the sound of singing up the external white staircase to the top floor. My fiancé and I parted ways immediately upon entering the room, as he went to sit with the men on the right side of the aisle and I scurried off to the left to find a spot amongst the women.

From my position near the back of the room, I took in the unfamiliar setting. It was quite a large room, with every wall and pillar painted white and with most of the floor covered with enormous white sheets that we all sat upon cross-legged. We were all facing what appeared to be a large gold platform draped with ornate red fabric, and I watched as worshippers entering the room bowed prostrate before it, leaving their cash offering before standing and joining their peers.

There was only one singer at the Gurdwara: a middle-aged Sikh man who stood behind the platform swishing what looked like a long silver stick with white horsehair protruding from the end of it. Television screens on the front wall displayed the words of the hymn in Punjabi and English.

While everyone sat in quiet reverence, a small boy of about 5 or 6 years old crawled unheeded around the room, propelling his toy car through the air with an outstretched arm and grinning happily as he sent it hurtling across the floor. I smiled at his innocent disregard.

There were people quietly coming and going throughout the time I sat there, and after around 15 minutes I noticed my fiancé beckoning to me from the doorway, so I stood and followed him out of the room.

From there, we entered the Langar Hall downstairs where food was already being served by Sikh volunteers. We immediately poured ourselves cups of hot chai (tea), before noticing the large silver trays that we would be using to collect our food. Juggling both items as the servers loaded up our trays, we quickly realised that ours was not the order to do things in.

So now I sit on a cream-coloured mat, hunched over, trying to eat without the use of any utensils. It feels awkward, but I’m happier for it. My joy is elevated as I lift the white porcelain mug and take a sip of chai, the warm, sweet liquid reminding me of the Teh Tariks (a similarly sweet milk tea) that I used to enjoy when I visited Malaysia back in early 2019.

For a brief moment, a feeling returns that I’d almost forgotten: the utter bliss of finding myself immersed in a culture completely foreign to my own. That exhilarating jumble of excitement and discomfort, where even a basic activity like eating requires thought. Just for a little while, I can imagine that I’m far away in India with no virus and no restrictions.

I would never have imagined that I could find this so close to home, but I’m very glad I did. For now, these sorts of experiences, and the hope that we can someday travel once again, are what we must all hold on to. 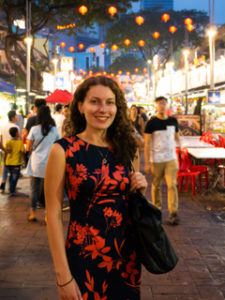 Nicole Banks has a passion for authentic travel and for documenting her travel experiences for others through writing and photography. She is a practicing lawyer based in Sydney, Australia and makes the most of working 100% remotely to travel the world with her partner as much as possible. India and Japan are currently topping her lengthy ‘must-see’ list.