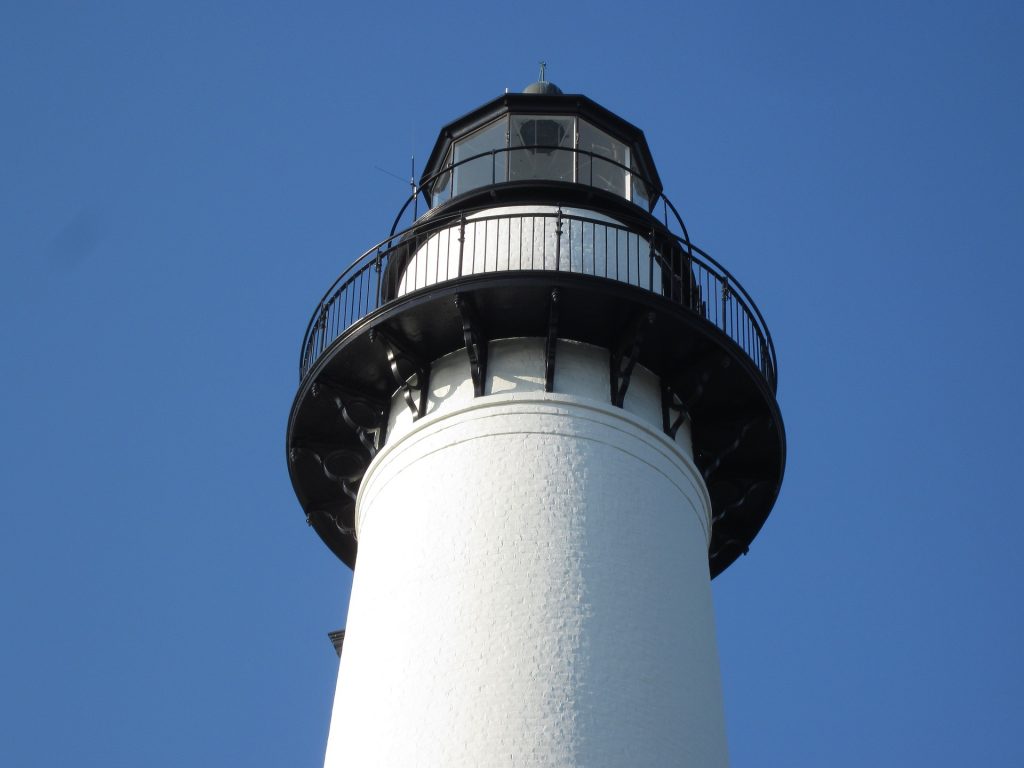 St. Simons Island in Glynn County, Georgia is filled with history. Its newest museum, the World War II Home Front Museum, gives a different view of the war from typical accounts. Most WWII museums deal with the war in Europe; D- Day on Normandy Beach or battles in far-away Belgium. We all know the war impacted this country, but this museum shows how close it came to our own shores. It’s the only museum in the country telling the home front story.

The museum is housed in the two historic buildings located on the east end of the island that were part of the Coast Guard facility. In the rear, the smaller, white-frame building where you begin the tour was once the boathouse. The elegant, white, antebellum-style building in front, with its watchtower atop, was the Coast Guard building. The buildings are listed on the National Register of Historic Places. The museum exhibits designer is Gallagher & Associates, the lead exhibit designer of the National World War II Museum in New Orleans.

The museum is self-guided and has exhibits in both buildings. It’s best to view the 10-minute video first. The video tells the story of what took place on Georgia’s coast.

The museum has many artifacts related to the war events on Georgia’s coast. They include ration books and the bell and life ring from the S.S. Esso Baton Rouge, one of two merchant ships that was sunk about 13 miles off St. Simons coast on April 8, 1942, by a German U-boat. Twenty-two sailors were killed in that attack. Others were rescued by Coast Guard crews stationed in the building that now houses the museum. There are personal stories you can hear by pushing a button or by reviewing actual duty books, like the one kept by First Chief Boatswain Elisha Tillett.

The museum is very interactive. There’s a Radar Room exhibit representing The King and Prince Resort Radar Training Facility. The exhibit has a large wall devoted to explaining what radar is. We tend to take it for granted today, but radar was a brand new wartime tool then. Did you know it stands for radio detection and ranging?

Here you can test your skill at being a fighter director, the officer who had to decide if a plane detected by radar was enemy or friendly. You are given information from ships at sea and can press a button to order fighter planes in the air to fire on an enemy plane or ignore a friendly plane.

Another exhibit lets you decide if a plane is an enemy or friendly based on the silhouette of the plane flying across a large screen in front of you. You have seconds to decide to shoot it down or not.

The airship room exhibit resembles the interior cabin of a blimp that would scout the coastline for enemy submarines. The blimps, built by Goodyear, could stay aloft for as much as 30 hours and were used in stations from Maine to Florida. When they spotted a U boat, they dropped smoke markers to alert aircraft where to bomb the German ships.

The Battle of the Atlantic is another interactive exhibit showing the many U. S. ships sunk by German U-boats off the United States Atlantic coast.

The museum deals with wartime life for civilians also. It tells about civilian activities such as blackouts, food rationing and buying war bonds. There is an A & P Food storefront where you decide how you would use your 100 points of ration coupons. Civilians were active in the Civil Air Patrol, which is also represented in an exhibit.

There’s a 3D shipbuilding exhibit about the J.A. Jones Shipyard in Brunswick where you decide which parts go together in what order as you ‘’build’’ a Liberty Ship.

The Liberty Ship design was chosen by President Roosevelt, even though he thought it was ugly because it was simple to build. This was important because suddenly, untrained people who normally would not be hired by shipyards, now flocked to J.A. Jones Shipyard in Brunswick as well as other shipyards. Women and African Americans were a large portion of the shipyard workforce.

One life-sized poster in the museum shows a significant event that may be unfamiliar to many people. An African American woman is smashing a bottle of champagne on a Liberty ship about to be launched. The caption reads, “Aralee Cox christened the Liberty Ship, S.S. William Cox, on December 30, 1944. The ship was named for her husband, an African American merchant seaman killed when his ship was sunk by a German submarine off the Virginia coast in 1942. Nationwide, 18 liberty ships were named for African-Americans.”

Ida Mae Lawson, a 101-year-old African American, former J.A. Jones Shipyard worker, was invited to participate in the opening of the museum. She and her granddaughter stood with the museum curator, Mimi Rogers, who christened the museum by smashing a bottle of champagne on its front flagpole. Ida Mae’s story is one of the remembered accounts you can listen to in the museum.

This museum is fun and educational for children as well as adults. Some of the exhibits are very simple such as an exhibit where you learn the different kinds of knots used on ships and practice tying them. Another has blocks that spell out a message on one side and on the other, have the signal flags used by sailors to send a message to another ship.

This museum proves the old saying, “War is hell on the home front, too.”