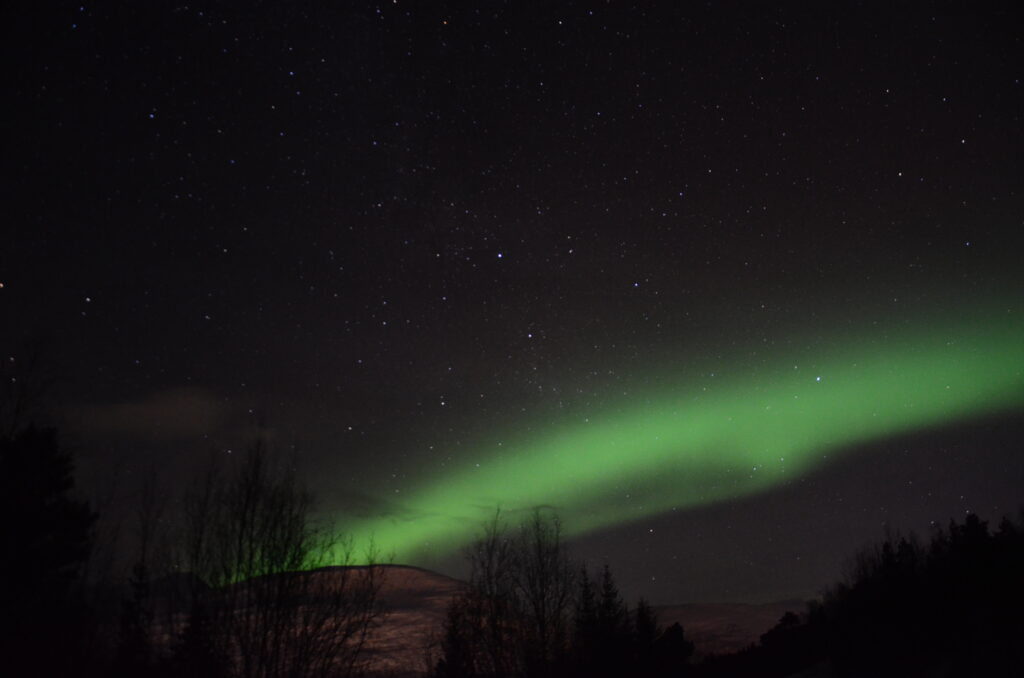 The official scientific name is the aurora borealis, but they have many names. The northern lights, the Green Lady, merry dancers, guovssahasat, and revontulet or ‘fox fires’. No matter what you call them, they have been tempting travellers forever. Everyone wants to capture the elusive green lights as they dance across the dark sky. Though, it seems a little crazy to build your entire holiday on the chance of seeing them. Something this magical and spectacular deserves a bit more attention. Make it the centrepiece, surrounded by science, history, and culture. The Green Lady is indeed more than a pretty picture. She is a natural phenomenon.

The people of Tromsø, Norway know this better than anyone. It is one of the best places to chase the lights and also one of the premium locations to study the science and cultural significance of the aurora borealis. From the Indigenous people who have lived with the phenomenon for generations to the scientists who study it, Tromsø is the heart of the northern lights.

The Science Behind the Borealis

If you’re planning your holiday based on seeing the northern lights, it helps if you understand how they happen… and how you can improve your chances of a sighting. Start with the science and head to the Tromsø University Museum, Norway’s oldest research institution. The University Museum includes four locations: The Polar Museum, MS Polstjerna, the Tromsø Arctic-Alpine Botanical Garden, and the recently refurbished Tromsø Museum with its new exhibit ‘Under lyset’.

This small but comprehensive exhibit covers all of the basic northern lights knowledge and insights into what we can still learn. The science-based display takes you through the history of studying the auroras, from the Sami stories of yesteryear to ongoing research into whether the aurora can be heard (a popular debate amongst observers). It is a fully interactive display, teasing your curiosity and tempting you to learn more. As you walk through the entry tunnel under a visual display of dancing lights, you can’t help but hope for the real thing. The good news is that a lot of money is being funded into research and technology to predict when the auroras will appear. However, this is not for the tourists’ viewing pleasure. It’s for telecommunications and electronic infrastructure.

A Norwegian scientist, Kristian Birkeland, first theorised that auroras were created by solar winds sending electrons racing towards the Earth. These electrons would hit the Earth’s magnetic field, deflect towards the poles of Earth and then burn in our atmosphere. The colors you see depend on the molecule most prominent: green for oxygen, red for nitrogen, and sometimes purple for hydrogen. The same colorful display also indicates a large amount of energy hitting the atmosphere. It doesn’t directly affect us on the Earth’s surface, but the sudden burst of energy can disrupt satellites, communication, and even power substations. In September 1859, a geomagnetic storm was so powerful it brought down telegraph systems all over Europe and North America. Auroras appeared as far as Mexico, Japan, China, Colombia, and northern Australia. A similar event in 1989 temporarily knocked out electricity across the entirety of Quebec. That’s motivation enough for Norway to continue its long history of scientific research into the lights. The tourism industry benefits with plenty of mobile apps claiming to predict when the next show will be.

It’s worth taking some extra time to explore the museum and all it offers. During the winter months (the best time to see the aurora), you can try a traditional Norwegian Kicksled around the surrounding paths outside. The Tromsø University Museum also houses displays on the natural history of Norway, Viking history, and the fantastic exhibit ‘Sapmi: Becoming a Nation’, telling how the Sámi people fought against oppression to hold on to their culture and rights. Their stories about Norway and the First Nations add to the beautiful experience of chasing the guovssahasat.

The First Nations to See the Northern Lights

One of the best cultural activities you can enjoy in Northern Norway is learning first-hand from the Sámi people. On our recent trip to Norway, my 12-year-old son and I stayed overnight at Tromsø Lapland, a Sámi Reindeer Camp with traditional Lavvo tents. We were one of the lucky groups: Our first sight of the aurora was a wisp of soft white cloud dancing above the reindeer camp. From now until forever, reindeer and Sámi people will live next to the word ‘magical’ in my mind.

One of the guides was eager to ask me, “Did you hear it?” It may seem like the weirdest question after a visual show like the northern lights. However, the Sámi (north Norway) word for the lights is ‘guovssahasat’, meaning ‘the light you can hear’. Alas, I did not hear a thing. Perhaps it was because I was laughing and cheering and calling out, “thank you!” at the time. I was pretty excited, having travelled with my son all the way from Sydney, Australia for the chance to see them.

Sámi traditions say you should always be calm and silent when the northern lights appear. They believe the lights are living beings with souls, able to hear and understand humans. You must not talk or mock them. Amidst our enthusiasm, the lights did not sing. Fortunately, our guides were happy to share our enthusiasm and many more stories over a traditional dinner of reindeer stew.

The Sámi people have been living with the aurora borealis for thousands of years. Despite their wealth of knowledge and experience in the Arctic Circle, the Sámi faced oppression and risked losing their identity completely. For centuries, they have fought to protect their culture and way of life. Today, activities like reindeer herding are only allowed by the Sámi people in recognition of the cultural significance. The popularity of responsible travel has encouraged more First Nation people to share their culture through tourism while maintaining their connection with their heritage.

Aurora Chasing is a Personal Journey

Part of the allure of the northern lights is the hope of catching that one perfect photo with the streak of green (or red or purple) across the night sky. There are many bus tours to take you out of the city with the hope of seeing the lights. Many rely on mobile phone apps, with weather updates and predictions for an incredible show. It is important to remember none of them can guarantee you will catch the aurora (scientists are still working on this). The best tours are the smaller personal tours which make the journey just as remarkable as the show itself.

We asked on some travel forums for recommendations, explicitly looking for a tour to include stargazing and photography. At least if we missed the aurora, we could learn some skills and make the most of the night sky. Thanks to this approach, we learned about Daniel at Tromsø FlexiTour. In the weeks leading up to our tour, Daniel shared tips about camera equipment and weather prediction to help us book the best date for the tour. By the time he collected us from our hotel, we were feeling a little more confident about capturing at least one good photo–if the opportunity should arise.

Again, we were lucky and caught quite a few good photos! Yet, if you ask my son what he remembers most about that night, he will talk about the ‘Norwegian Hot Dogs’ cooked on the camp stove. He will laugh about the stories we shared with our small group of chasers, hearing about travel from near and far. He will beam with pride for the photos he captured of the aurora and the stars when the aurora was gone (he has really taken to night photography now). Most of all, he remembers the experience of sitting out in the freezing cold and enjoying the company with others. Sure, he remembers seeing the lights, but he treasures the experience more.

The northern lights feature high on most bucket lists. It is one of those experiences that genuinely needs to be seen. A word of caution: it is rarely like what you see in photos. The vibrant splash of color is still visible but less potent with the naked eye. Many tourists are surprised (and even disappointed) when they see a less intense showing. But for those who smile wistfully with recollection, there are usually stories to go with it. It could be the pursuit of science, the history of Sámi folklore, or even the contentment of good company on your own personal journey. The Green Lady sings and dances with us all. And you can’t capture that in a photo.