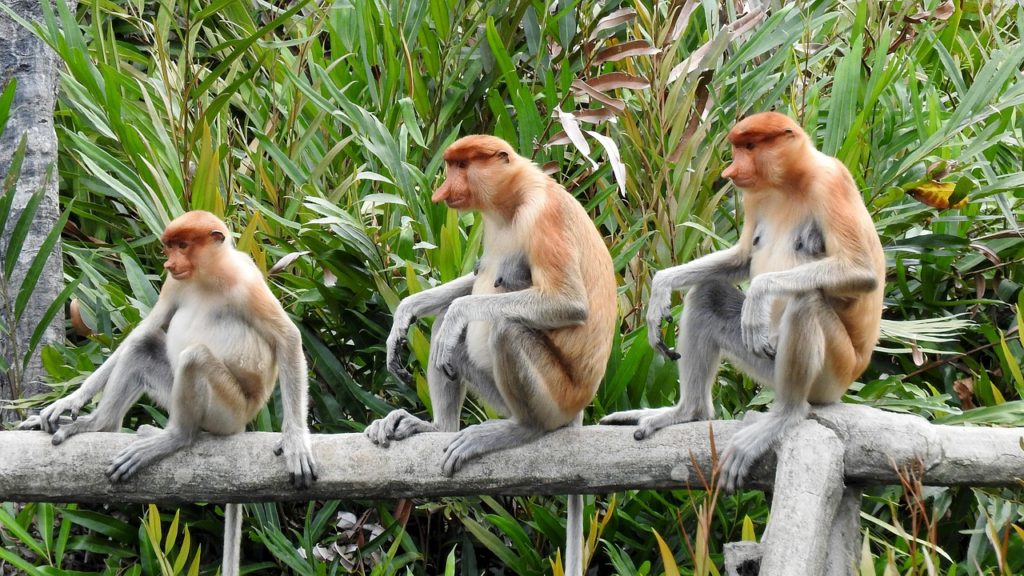 Our guide on the Kinabatangan River in Borneo in Malaysia has been pointing out wildlife at every turn. Crocodiles sulking near the water’s edge. Proboscis monkeys lazing in the top of trees. Hornbills flying overhead. The only thing missing is the elusive pygmy elephant. The elephant’s absence hints at the growing threat to the abundant wildlife in Borneo.

Loi is a local and he knows the Kinabatangan River like the back of his hand. He has been working as a guide with the Bilit Adventure Lodge for a few years, and is using the experience to further his studies at University. Loi says it is becoming more difficult to spot pygmy elephants in the wild since the growth of palm oil plantations. The animals often travel deeper into the jungle for protection against farmers and poachers. The plantations have reduced so much of the natural habitat, the elephants do not feel safe in open areas. This corner of the world, known to some as the ‘jungle less traveled’ is fast becoming victim to its own siren call and the local people, once promised riches from modern development, are turning to sustainable tourism to counter the greatest threat to their land: palm oil plantations.

Borneo is the third largest island in the world and split between three different nations: Indonesia, Brunei, and Malaysia. The Malaysian part of Borneo is shared between two states, Sabah in the northeast and Sarawak in the northwest. While Sarawak is well-known for cultural diversity and land adventures, Sabah offers the best dive sites and wildlife safaris.

If you are looking for a truly natural wildlife safari, the best place to do it is on the Kinabatangan River. Located in the far northeast corner of Sabah, the Kinabatangan is the longest river in Sabah and has a rich ecosystem that attracts tourists every year. It is known for its fantastic habitats, including limestone caves, oxbow lakes, and densely rich jungle that reaches right up to the river’s edge. Hidden within these habitats are weird and wonderful animals you cannot find anywhere else in the world: the Borneo orangutan, the pygmy elephants, and the proboscis monkeys.

The challenge in any wildlife safari is finding the animals. They are elusive. They much prefer their secret paths through the Borneo jungle. And they are endangered. Once promised as a cheap source of income for local farmers, palm oil plantations have quickly become an international commodity with environmental and social consequences.

The Palm Oil Plantations of Borneo

Palm oil is one of the world’s cheapest oils and is used in everyday items such as food, cleaning products, makeup, even bio-fuels. When the demand for palm oil boomed in the 1990s, palm oil plantations were seen as an opportunity to alleviate Borneo’s rising unemployment and pay for much needed infrastructure in the area.

Fast-forward almost 30-years and Malaysia is now the second largest producer of palm oil (after Indonesia). However, the local benefits quickly deteriorated over the years, leaving a scar on the community. The environmental impact has been felt greatest by the wildlife, as they are forcibly removed from their habitats. Deforestation has also been connected with the destabilization of land, an increase in water pollution and the destruction of land owned by indigenous communities.

The local communities have also felt the social impact of palm oil economically as well. Many were promised a quick and easy income with a small plot for farming the palms. However, cultivation takes a long time and requires significant set-up costs. To pay for the set-up costs, local farmers entered commercial agreements with palm oil processing companies. It takes four years for oil palms to produce fruit suitable for harvest so during this time, local farmers are facing further costs and loan interest without any financial returns. They are drowning in unreasonable debt while the larger companies buy up their land and employ cheaper foreign labor to farm it. Faced with the devastation to their lives and their environment, locals turned to a new source of income and a way to combat the plantations: responsible tourism.

The Rise of Responsible Tourism in Sabah

Almost twenty years ago, a small local group, who banded together informally, refused to sell their land to palm oil plantations. Instead, they chose to develop sustainable safari camps along the Kinabatangan River. The initial plan was for the camps to provide accommodation for tourists along with guided tours along the river and activities in local villages. As the popularity of responsible travel has grown, so too have the number of sustainable camps. And unlike the palm oil plantations, the camp operators have kept their promise to the local communities and the environment.

Each of the safari camps provides its own balance between luxury and sustainability. Access to the camps is by boat, with many built on platforms above the waterline. Great care has been taken to reduce the impact on the river and minimize any intrusion on the wildlife. While the accommodation varies between sites, the quality is high: usually a bungalow, with air-conditioning or fans and private ensuite bathrooms, powered by sustainable energy resources.

Camps such as the Bilit Adventure Lodge employ their guides from the local area. The catering is local cuisine prepared by people who live in the nearby village. Tree planting, night safaris, and children’s educational activities are all provided also by locals, committed to sharing their cultural heritage. Every boat on the water is piloted by someone local, and accompanied by a local guide. When asked if the staff are taken care of, Loi gives us a genuine smile and laughs. For him, it is not just a job. It is a community. Even after he finishes studying, he wants to return and support the camp. It has become a way of life for him; something he would not expect from a palm oil plantation. As more tourists visit the safari camps, Loi believes the industry will continue to flourish and one day be the dominant feature along the river.

Life on the Kinabatangan River

As we round the bend, we hear another boat call out; a herd of elephants has been spotted! The landscape changes and the plantations give way to jungle. We have entered a protected area of the river, where palm oil companies have been prevented from purchasing the land by the Malaysian government.

In the shadows of dusk, we can just see the herd of elephants. Loi sighs with relief. He is proud to show us these beautiful creatures in the wild but he is mostly grateful for their continued presence. This is his life. He works with the environment to protect them and to share it with travelers like me.

The palm oil plantations still feature heavily along the Kinabatangan River but their growth is not unchecked. For each plantation, there is a local community of tourism operators, passionate about their home and eager to share it with visitors. The local guides know where the wildlife is hiding and you can trust them to seek them out.