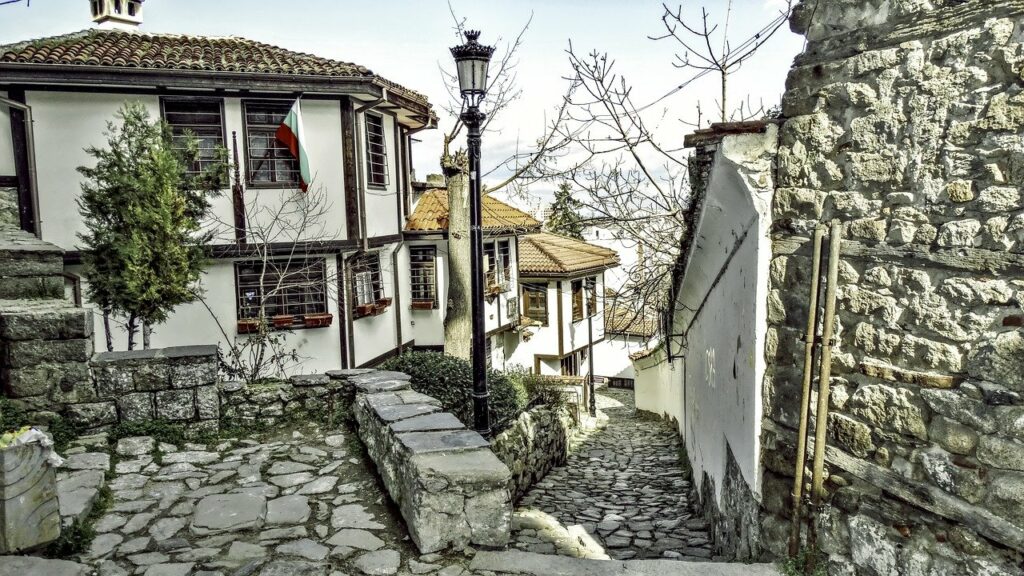 Plovdiv is the 3rd oldest city in the world, whose history dates back over 6,000 years. This ancient city is often referred to as the “Paris of the Balkans” and quickly becoming a must-see tourist destination in Bulgaria. This fascinating city will keep you entertained at every corner with stone buildings, cobblestone streets, quaint local restaurants, and numerous art galleries.

The Old Town of Plovdiv is filled with magic. There are stunning architectural and historical reserves located on the three-hill area of Bounardzhika, Sahat Tepe, and Nebbet, which was the main center for political, cultural, and enlightenment activities. You will encounter old Bulgarian Renaissance houses, churches, and temples as you travel uphill from the Dzhumaya.

Old Town is a living museum displaying the architectural brilliance of ancient Bulgarians. They turned the houses into art galleries, museums, and dormitories for tourists. Head to the top of the Nebet Tepe hill for majestic panoramic views of the city below and the surrounding mountains.

Visit the ruins of a Thracian temple, a sanctuary of Hera and Zeus in Sredna Gora. A team of archaeologists from the National History Museum discovered the ruins in 2000. There were coins and pottery fragments that are believed to be offerings to Zeus. The site is said to have been built as early as the Iron Age.

The Ancient Theatre is one of the best-preserved amphitheaters in Bulgaria. It was discovered by accident in the 1970s by Plovdiv archaeologists. The theatre got built in the 2nd century under the rule of Titus Flavius Cotis. There are 28 rows of marble seats spread out in a horseshoe design that got used for its 6,000 spectators. Hunting games, theatre shows, and gladiatorial games were held here. Today, the Ancient theatre operates as a stage for opera, drama, and music shows. Don’t forget to pick up local artwork and souvenirs at the local stalls along the way!

The Roman Stadium is situated in the center of Plovdiv and is a replica of Delphi in Greece. The Roman Emperor Hadrian built this architectural masterpiece during the 2nd century during the reign of Emporer Hadrian. You can find the Roman Stadium beneath the main city. However, only 12 rows of marbled seats are visible because it is hidden under buildings.

The Roman Stadium could seat 30,000 spectators in its prime. However, only 12 rows of marbled seats are visible because they are hidden under buildings and have become an ongoing renovation project by the city.

The monument of Philip II of Macedon, ruler of the Thracian kingdom in the 4th century, was erected in 2004. It was first positioned in front of the Roman Stadium but later moved in front of the Municipal Council of Plovdiv. You will find a stunning, refurbished mosque next to this amazing piece of architecture, and it is well worth the visit when in Plovdiv.

Other amazing sites to see in Plovdiv

The Roman Forum used to be the city center of Plovdiv and is situated close to the Tourist Information Centre. The Forum’s construction began during the 1st century under the Vespasian rule and finished in the 2nd century.

The following is a list of various museums that are worth looking into before your trip:

Old churches and monasteries are scattered throughout the city. All with their own unique history to discover:

Visit the Djumaya Mosque, one of the oldest European mosques built during Ottoman rule, or stroll around the Sephardic Plovdiv Synagogue, which is a true treasure.

No matter where you go in the city of Plovdiv, you will find a wealth of ancient culture through architecture and museums. From the ruins of ancient cities, incredible locally sourced wines and food, and hospitable residents, the people of Bulgaria and the sights are out of this world.

As you walk through the remnants of empires that existed centuries ago, you will be transported to a compelling historical time.