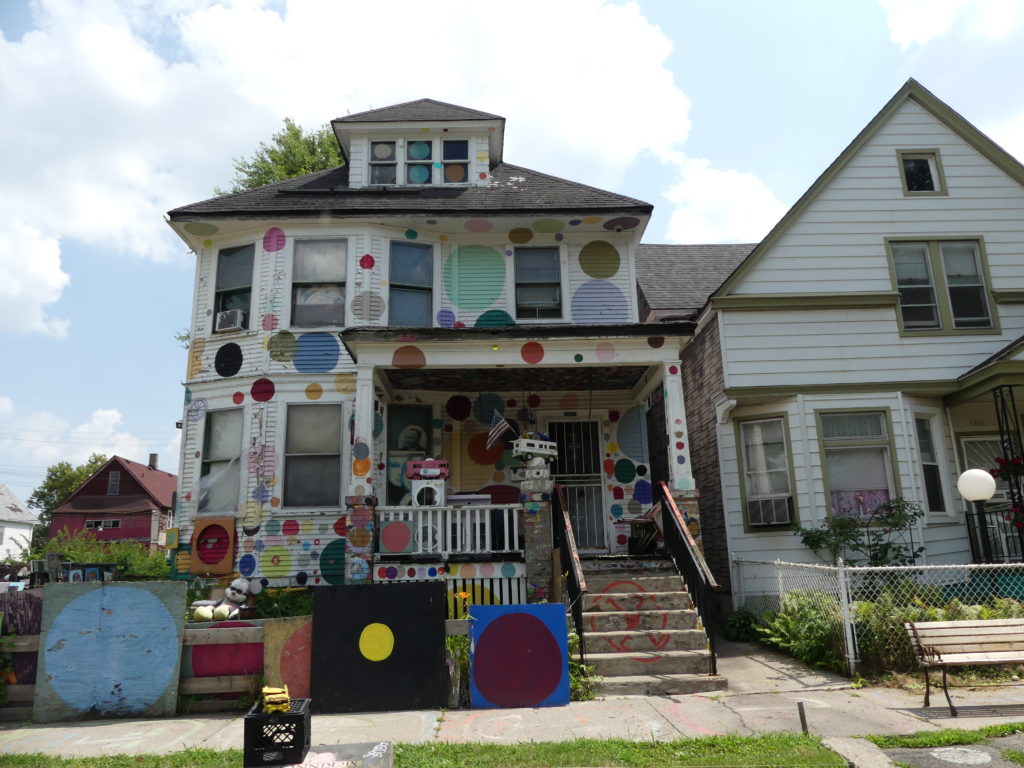 Award-winning artist and sculptor Tyree Guyton started The Heidelberg Project in 1986 as a political protest after he returned to his old Detroit neighborhood, the Heidelberg area in the McDougall-Hunt Neighborhood, and found dereliction and debris. Drugs and crime made the neighborhood unsafe to walk even in the daytime. He began cleaning up vacant lots with the help of his grandfather, Sam Mackey. Then he took the first step in what became known as the Heidelberg Project; he painted his mother’s house with brightly colored polka dots as a statement that we are all different but should all be treated equally. It became known as the Dotty Wotty House, sometimes called the People’s House.

The house was built in 1908 and it is where Guyton first began to paint at nine years old when his grandfather gave him a brush. His grandfather’s love of jellybeans inspired the theme. Guyton also intended the dots to represent the circle of life; how all things in life are connected. They are the main theme throughout the Heidelberg project. You see them on houses, street paintings, playgrounds, and even on trees.

Guyton has two additional prevalent themes in his painted houses: shoes and numbers, mostly as represented by clocks. The shoes are meant to symbolize reaching deep into the soul, or “sole.” With this everyday object, Guyton intends to deliver a profound message.

Artwork Focusing on Soles and Souls

Souls of the Most High is not a house but a tree decorated with shoes. Guyton created it in homage to his grandfather’s recollection of lynching. Every shoe represents the soul of one of these hanged men. The tree was done in 1992. The project’s executive director, and Guyton’s wife, Jenenne Whitfield, told a local paper, “It is a haunting reminder of lynchings in the South, but today the positive message is that we are lifting up the souls of the community.”

Souls on Fire is another of Guyton’s works featuring shoes. It is an old apartment-sized stove with kitchen chairs sticking out the top. Gloves sit on top of all of the chair legs. Inside the oven is a large, red pair of shoes. The work pays homage to the victims of the Holocaust.

Time as a Moving Image

Guyton’s other prominent theme of numbers and clocks is meant to tell us that it is time for us to reflect on the passage of time. He wants the viewer to consider where we have been, why we are here now, and where we are going. Philosophically, Guyton relates these project to both what Plato said about time, that it ” is a moving image of reality” and what Albert Einstein said, that “time is an illusion.”

Another work in this style is The Numbers House, which belongs to the Woods family. Ms. Thelma Woods dreamed of winning the lottery, an aspiration she shared with Guyton. So, Guyton painted it in the ‘90s with clocks and numbers. As an added benefit, local children use the numbers to learn to count.

Controversy about the Art

The Heidelberg project is one of the most visited spots in Detroit but is not welcomed by all. In 1991 and again in 1999, the city demolished some of the art project houses, claiming that old chestnut, ‘urban renewal.’ When that didn’t end the project, a string of unsolved arsons destroyed eight of the homes in 2013. House of Soul was one of the burned homes. The Heidelberg Project proved resilient, however. Guyton built Holy Places on the site of the earlier House of Soul. It pays homage to Detroit‘s past. There are records fitted to the exterior framework of a house representing Motown and various articles.

In the McDougall-Hunt Neighborhood, a mostly African American neighborhood where the Heidelberg Project is located, the poverty rates are about 40 percent below the poverty line and high crime. Despite the criticism of the artwork, by both neighbors and officials, it has changed the neighborhood for the better, according to newspaper accounts. Prior to the Heidelberg Project people feared to walk its streets. Today it feels safe. You even see children playing in the playground, where once you didn’t.

The project is still evolving but always with the aim of speaking for the poor and underprivileged against political power. Guyton announced a new direction for the project in August 2016. He calls it Heidelberg 3.0. Instead of a one-man neighborhood restoration project, he sees it as a place where artists can live and take part in neighborhood reclamation. He will work with emerging artists who will have a studio and residence starting with the Numbers House currently being renovated. There will also be an education and event space for neighborhood events and youth programming.