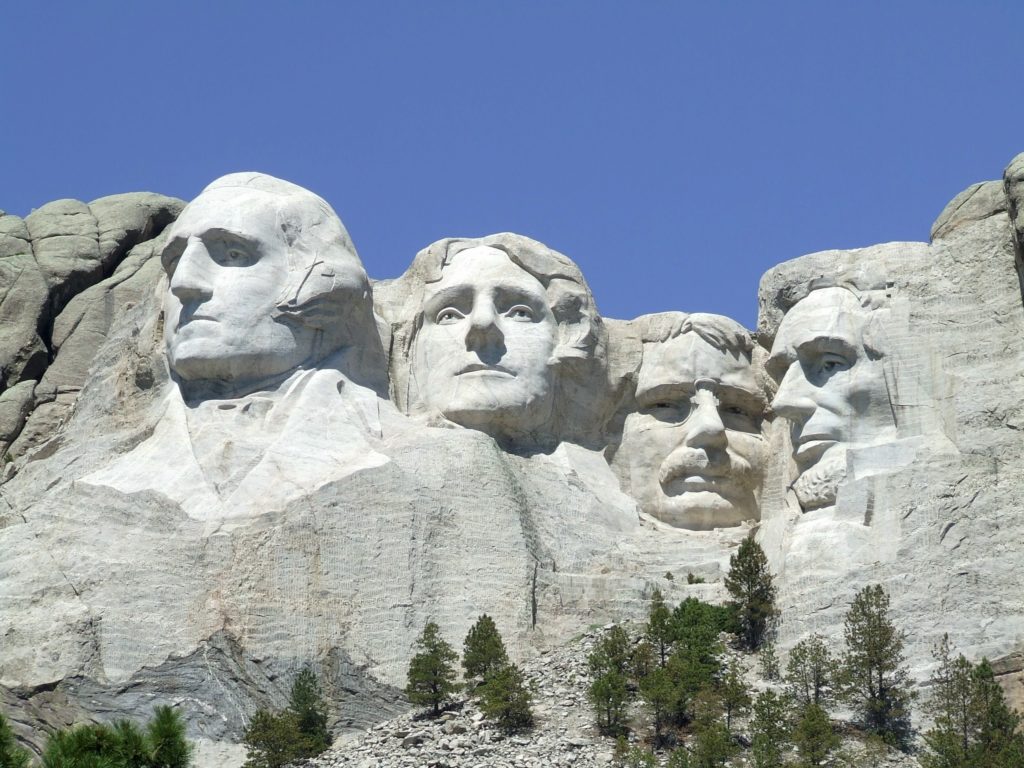 While most first time visitors to the United States generally gravitate towards the iconic cities on the East or West Coast, there are many places in the interior of the country where “America the Beautiful” can be experienced.   Located in the north-central region of the United States, the Great Plains state of South Dakota offers a mix of natural beauty, American history, iconic landmarks and Native American culture.   Within South Dakota, the veins of the Black Hill Mountains hold many treasures waiting to be discovered.

The Black Hills contain some of the oldest mountains in America.  They serve as home to a rich variety of wildlife including herds of buffalo, and they hold two of the longest and most fascinating caves in the world, Wind and Jewel Cave.  The Black Hills also have several guardians who oversee its natural and historic treasures.

Nestled in the majestic mountains of South Dakota’s Black Hills, four presidential faces carved in stone greet visitors—Mount Rushmore National Memorial.  Mount Rushmore is South Dakota’s most iconic historical landmark and one of the state’s crown jewels.   The faces of U.S. Presidents George Washington, Thomas Jefferson, Theodore Roosevelt and Abraham Lincoln are depicted across a granite wall and stand 60-feet high. Artists Gutzon and Lincoln Borglum began construction on Mount Rushmore in 1927 and finished it 14 years later in 1941.  To say that Mount Rushmore is awe-inspiring is an understatement.  There is nothing like seeing the faces of America’s founding fathers up close but the Presidents are not alone.  The Memorial site holds a museum with interactive exhibits for those who don’t want to venture close to the edge.

The Black Hills host another lesser-known mountain monument just up the way from Mount Rushmore in Custer County—Crazy Horse Memorial.   An artist named Korczak Ziolkowski began work on Crazy Horse Memorial in 1948 as a tribute to the mythical Lakota leader but the construction has yet to be finished.  Decades later the memorial has yet to be completed and many speculate whether completion will ever come.  However, if Ziolkowski’s vision is ever fulfilled, the Crazy Horse Memorial will be the largest mountain carving in the world standing at 641 feet wide and 563 feet high.  Currently, the 87-foot high face of Crazy Horse sits alone on the mountain but the Memorial site has an Indian Museum of North American and a Native American Educational & Cultural Center that offers educational and cultural programming.

The Black Hills also holds numerous hidden treasures that lay beneath its soil.  Thousands of years of prehistoric human relics and dinosaur fossils are being uncovered throughout the region.  Visitors can play archaeologist or paleontologist by exploring dig sites like The Mammoth Site in Hot Springs or The Mitchell Prehistoric Village in the hopes of uncovering evidence from another time.

For those seeking a taste of the Wild West, the Lewis and Clark trail runs through South Dakota and crosses the town of Deadwood.  Deadwood began as an illegal settlement in the 1870s because the land was taken after being granted to the Lakota Indians.  A gold rush ensued and that brought outlaws, gamblers, gun-slingers and Chinese immigrants to the area.   Colorful characters from Calamity Jane and Wild Bill Hickok to Potato Creek Johnny and Seth Bullock became legendary in Deadwood.  This Black Hills town survived three major fires and the threat of becoming a ghost town but in 1961 Deadwood was designated a National Historic Landmark and in 1989 it became the first town to experiment with legalized gaming as a means to revitalizing the town and preserving historic legacies.  The experiment worked and made Deadwood the first small Deadwood was the first small community in the U.S. to seek legal gambling revenues to rebirth a town.   Today, Deadwood is the wildest town in the west.  Visitors can enjoy a daily Old West shootout and reenactment, walk the historic trail or see the final resting place of legendary figures.

In addition to encounters with historic figures, relics and the legendary landscapes that have been featured by Hollywood, the Black Hills of South Dakota is one of the best places to discover the Native American culture, with several Indian Reservations and a large Native population. The Dakota, Lakota and Nakota people of the Great Sioux Nation can still be found in the state, while the amazing Native American Scenic Byway that crosses South Dakota offers a deeper insight into the native culture.

Voices of the past come alive throughout South Dakota but the faces and the multiple treasures that can be found throughout the Black Hills provide one of the most authentic American experiences one can enjoy.

Where ever you may roam, just know that someone will be watching you.