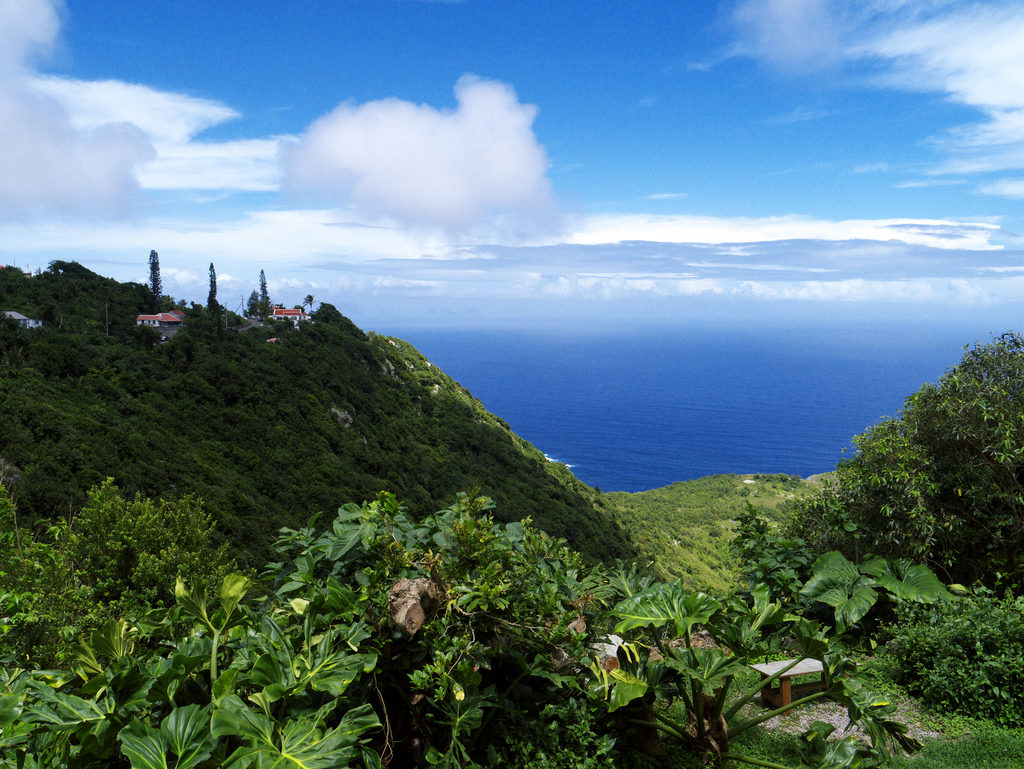 By Breana Johnson
| May 19, 2021 Caribbean and AtlanticAdventure Off the Beaten Path

I gaze in awe out the window of the old 15-passanger van that serves as a bus. Just inches from the narrow concrete road, a carpet of green treetops sweeps dramatically downward and ends abruptly in gray cliffs that plummet into an azure ocean. The red roofs of houses are visible in clusters among the trees here and there. Our bus driver gestures proudly to the houses. “Saba is one of the last islands to still have an authentic Old Caribbean look,” he explains, “It’s actually a law that everyone has to have white houses with red roofs and green trim.”

It’s easy to imagine what Saba must have looked like two hundred years ago. Aside from the medical school and the single narrow ribbon of road, the island hasn’t changed much. Despite The Road, many of the locals still use the wooden ladders and footpaths that served as the only means of transportation on the island for hundreds of years. And many have to. The Road was a nearly-impossible feat of engineering that united the three communities on the island, but it doesn’t connect to the many houses dotting the steep mountains. I come to many of these homes as I hike up the long trail to the island’s summit, an ancient volcanic peak that stands as the highest point in the Netherlands.

Saba is unique among the Caribbean islands, especially the Dutch Caribbean islands. Just a 90 minute boat ride away, my home, St. Maarten, is worlds and centuries away from Saba’s quiet, antique air. I spend many evenings on St. Maarten watching the sun set beside Saba’s purple outline, smelling the pungent scent of cigarette smoke floating up from the apartment below in the racket of competing amplification systems blasting from the club, casino, and various open-air bars in my neighborhood. The tourist economy has nearly obliterated the old culture of the island, and just a handful of the old memories are still living and breathing. In my corner of St. Maarten, peace only comes when the power company’s generators fail island-wide and everything melts away into the darkness. At times like these, I can see a tiny trail of twinkling lights in the distance: a few cars on The Road in faraway Saba.

As I struggle the last few feet to the top of Saba’s summit, I can hardly believe that I’m on the same planet as that touristy din that pulses around my home. I emerge from the greenery and mud onto a rock ledge overlooking the entire island. Below me, the ledge disappears into the tops of tall trees that meld into a single sheet of green, majestically undulating in valleys and peaks until they reach the deep ocean below.

It’s little wonder that pirates chose Saba as a haven between pillaging episodes. There’s no beach here, and virtually no natural place to dock a watercraft. It would be easy to hide and hard to fight a battle uphill. This ruggedness is why the plantation and slave industry never reached Saba, and why the Dutch immigrants who migrated here never again saw anything more than their 5 square miles of paradise. Saba’s steep hills and forbidding cliffs have also saved her from an overflow of modern tourists.

Even today, beautiful sun-lit morning in the height of tourist season, there are only about fifty of us visiting from off-island. The price is a bit prohibitive for many tourists coming from St. Maarten. Even with my resident’s discount, it cost $130 for my four hours on Saba. I quickly find, however, that the money is a small price to pay for a chance to see this beautiful island.

After I come down from the top of Mount Scenery, I take some time to wander the paths around the small community. The buildings are nearly all centuries old; the ones that are not so antique are built to blend right in. Of course, Saba may still have an 18th and 19th Century look, but it’s been modernized in many ways. I grab a bottle of Vitamin Water at the convenience store, thirsty for electrolytes after a hike in this humid weather. Saba has electricity, internet, and gas stations, just like any other island.

Saba actually has a progressive edge over the more modernized islands. While much of the rest of the Dutch Caribbean was building an electricity-dependent tourist economy and seeing a rapid decline in the health of its reefs, Saba was sitting quietly unchanged, practically disconnected from the rest of the world. In recent decades, since Saba has been updating its infrastructure, it has been able to take a more enlightened path to modernization. Saba practically skipped an era when natural resourced were freely pillaged for the sake of economy and pleasure. Instead, she is jumping feet-first into a futuristic world were sustainability and conservation inform progress and growth. Saba isn’t looking to become like the other islands. It is looking to become a better-equipped version of its beautiful self. In fact, Saba is well on its way to achieving 100 % sustainability by the year 2020.

As the bus winds back down the mountain to our ferry, the bus driver proudly explains Saba’s rapid transition to power via solar panels and its excellent reef preservation system. I look out the window at the small red-roofed colonial churches, schools, and homes, and a sense of wonder fills me. How can such a small place preserve both its culture and its natural surroundings in a world where both often get lost to the demands of economy and progress?

Saba is more than just a pretty place to visit. It’s more than a soaring volcanic peak or vibrant reef. This is a place where future meets past, colliding in a way that I’ve seen before. Our tour guide is still talking, showing us an expanding school that needs more teachers. He turns to me, pride and excitement lighting up his eyes. “See? You could work there. You could come and live here and stay in this beautiful place forever.” He sighs happily, thinking of his beloved home so far away from the problems and urgency of the world beyond. Who knows? Maybe I will be back someday. There’s nowhere else quite like the island of Saba.

1 thought on “The Island of Saba: Looking to the Future, Embracing the Past”