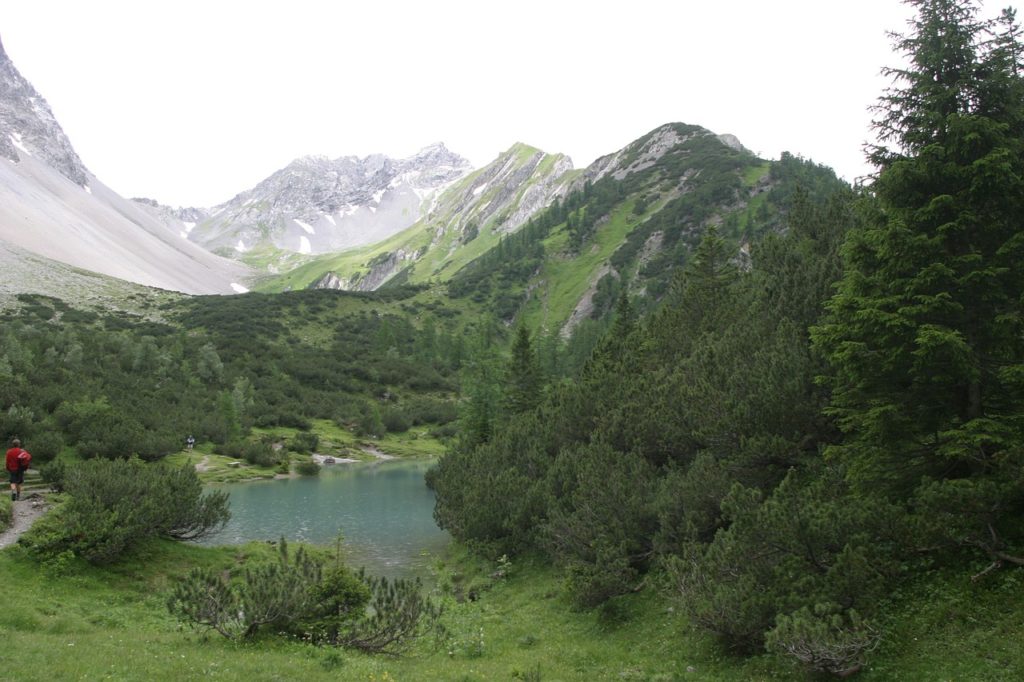 In August 2015, I left Canada for greener pastures, departing on a ten month exchange year to Austria. My year spent abroad was unique in many ways, I lived with a host family, attended Austrian school, learned German and explored my surroundings. One of the most special things about my 10 months spent in Austria would definitely be the Bundesland (state) that I spent it in. Vorarlberg is probably the least touristy area in all of Austria, and yet is filled with surprises, wonderful experiences and stunning beauty.

Vorarlberg is the westernmost Bundesland in Austria, sharing a border with Switzerland, Germany and Liechtenstein. Its central, yet isolated location has led to a large influence of the surrounding countries, but twisted in a unique way. This can be seen easiest in the food found in this mountainous Austrian province, as well as the dialect they speak.

One dish that Vorarlberg citizens made their own is called Käsespätzle. Reminiscent of mac and cheese, this infamous dish is common throughout all of Austria, yet is slightly different in Vorarlberg. First, dough is made of water, flour, eggs and various other ingredients, which is then put through a contraption similar to a cheese grater. This forms the dough into noodle-like forms that are cooked through boiling similar to pasta. After the homemade “noodles” (they aren’t really noodles, more like tiny dough balls) are cooked, cheese is melted over top, and voila, you have Käsespätzle! Sometimes an onion is added to garnish the cheese, and many eat this dish with a lot of salt and pepper. In Vorarlberg, instead of using plain cheese like in the rest of Austria, “Bergkäse” (mountain cheese) is used instead, which is completely unique to the alps,  with Vorarlberg having its own special variety that can be found nowhere else. Now, I have to admit at first I didn’t like Käsespätzle due to the strong taste of Vorarlberger cheese, yet throughout my exchange year it grew on me, and now that I’m back in Canada I find myself dreaming about the wonderful, unique taste of Vorarlberger käsespätzle.

There are a plethora of other delicious foods that can be found in Vorarlberg, some of  my favourites include nussschnecken, glühmost, glühwein, bread in general and all the chocolate that can be found. Nussschnecken are similar to cinnamon rolls, but are instead filled with powdered nuts and icing. I found this a delightful combination for a dessert choice. Glühmost and glühwein are both hot drinks, usually consumed in the winter. Glühmost is warmed apple cider, while glühwein is mulled wine. Both are delicious if you are looking for something to warm you up through the long Austrian winter, personally I enjoy glühmost more. I found the bread in Europe to be far superior to that found in Canada, and the weight I gained in Austria also attested to that fact. If you are ever in a German speaking country, try some freshly baked bread, it is both delicious and a common kitchen staple. Due to its proximity to Switzerland, a large variety of quality Swiss chocolate can be found in grocery stores in Vorarlberg, which is rare anywhere else in Austria. Try Ovomaltine! If you are looking for an Austrian chocolate to sample, Milka has an outlet store and factory located in Bludenz.

The dialect in Vorarlberg, also known as “Vorarlbergerisch” is completely limited to Vorarlberg and almost nobody can understand it otherwise. To me it always sounded like a less harsh version of Swiss German, which I guess could be true to an extent as Vorarlberg is located extremely close to Switzerland. Within Vorarlbergerisch there are a variety of other strains of dialect depending on which area you originate from. When I lived there I always thought it was so amazing that so many dialects existed, because in Canada, across the whole country most of us speak in an extremely similar style. The dialects originate from long periods of isolation in mountain valleys and the inability to communicate with each other frequently enough to regulate a common form of speech.

When I first arrived in Austria I probably knew three German words, it’s a good thing that my host family spoke English. After being immersed at school and hearing it constantly, I slowly began to understand the conversations around me. Yet I noticed something strange, a lot of them didn’t sound quite like the German I had pictured myself learning. That’s how I realized that instead of learning just one language, I would have to learn yet another, as I picked up the different pronunciations and vocabulary of dialect in Vorarlberg. It took a long time, and although I would never pass for a true Vorarlberger, eventually I became proficient enough in German to understand both High German and the dialect spoken locally.

If you ever choose to visit this stunning area of Austria, there are a variety of areas considered “must sees”. I lived in Feldkirch, so I’m mostly going to write about the interesting areas I found close to my living quarters. First of all, Feldkirch in general has an extremely interesting old town. The center is preserved, with the Schattenburg, a medieval castle,  looming over the town. You can walk around, seeing a huge variety of historical buildings, with more modern, yet still aesthetically pleasing buildings surrounding them. The Schattenburg offers an interesting museum experience (the website is only in German, so use a browser that offers a translation option), talking of the history of the area, the different nobles that lived there, and the construction of the castle. The Schattenburg also has a restaurant located in its base, so if you are looking for somewhere to eat that has delicious food while being close to the town’s main attractions then this is the place to go. If you are looking for a small hike with a big view, the Stadtschrofen is ideal. Here you can see a map showing the endpoint of the hike. Placed upon a cliff overlooking the whole town, you can see the valley in its entirety from here. Ask any local for directions and they will point you in the right direction, as well as a variety of signs that do the same thing. If you are looking for a good starting point begin behind the HAK school(map link) , where a trail leads up the mountain. On the way you’ll see a unique monastery, where a variety of monks live, which will make you feel as if you are in the Himalayas rather than the Alps. Called the Kapuziner Monastery Feldkirch, you can find more information about this noteworthy site here, the website is in German, so make sure to use a browser that offers a translation option.

Other places I really enjoyed visiting while living in Vorarlberg include Bregenz, Lindau and Montafon. Bregenz rests almost on the border of Germany, and sits upon the Bodensee, a massive lake that also borders Switzerland and Germany. With amazing views, there are a variety of cruises that leave from Bregenz that travel along the lake, giving you a real sense of its immense size. Sometimes there are special event cruises, including fine dining, brunch and cruises with special activities such as dancing. Bregenz is also fun to visit on a hot summer’s day for a swim or delicious ice cream, and is renowned worldwide for its performing arts festival with a stage resting upon the lake that take place in July called the Bregenz Festival. Lindau isn’t actually in Vorarlberg, it’s in Germany, yet you can visit with any Vorarlberg maximo public transport pass at no extra cost to yourself. Located on an island in the Bodensee, Lindau is filled with quirky shops, and interesting ancient buildings. Montafon is mountain valley filled with nature. Many come here in winter to ski, and in summer to hike. Cows graze, ringing their bells in a stereotypical Alpen outlook. My favourite place to ski was always Silvretta, one of the many ski and hiking destinations in the valley. If you are looking to immerse yourself in nature while visiting Vorarlberg, this is the place to go.

Hopefully this article intrigued you about the little known area called Vorarlberg. I found many friendly people and amazing friends there, and I’m sure that you will too after seeing the area’s advantages and stunning scenery, Safe travels!