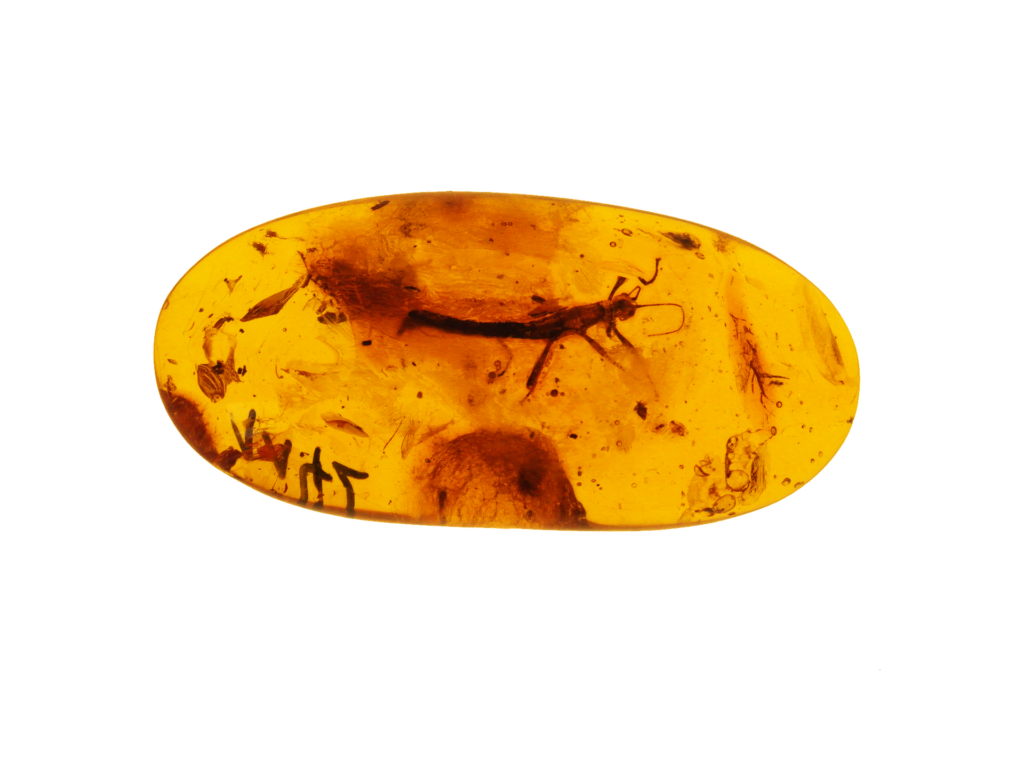 By Cara Siera | April 27, 2022 Caribbean and AtlanticOff the Beaten Path

I was one of those kids who loved dinosaurs. I collected fossils. My daily companions were a collection of plastic brachiosaurs, stegosaurs, and triceratops. I watched Jurassic Park until I had the lines memorized.

Little did I know that some two decades later, I’d be standing at a place that made those childhood daydreams possible–the Dominican Republic’s Amber Museum.

The science fiction that binds Jurassic Park’s storyline together is that dinosaur DNA could be extracted from mosquitos and other biting insects preserved in amber. “From what Michael Crichton said, he had written Jurassic Park,” said paleobiologist and amber researcher George Poinar, Jr. in an interview. “But he hadn’t decided how he was going to get the dinosaur DNA, and when he read the paper [on the fly in Baltic amber], this gave him the idea that he would obtain it from mosquitoes that bit the dinosaurs.”

So what is amber? When a tree is injured, it seals the wound with sticky, sugary sap. As the sap flows, insects and other small objects can become encased in it. If conditions are right, the sap will harden and fossilize into a semi-precious stone called amber. The bits of plants or insects inside the amber are called inclusions.

While amber formed in many places, such as the Baltic region of northeastern Europe, Dominican amber is special. It is abundant and valued for its transparency, allowing a detailed viewing of objects inside. It can be found in abundance despite its great age – researchers agree that Dominican amber formed 25 to 40 million years ago, during the Tertiary and Mesozoic periods.

The second scene of Jurassic Park, which depicts the discovery of an insect encased in amber, was filmed at one of the Dominican Republic’s amber mines. Many travel websites also report that the Amber Museum was a filming location for a laboratory scene, as amber from their collection was used.

Subtle love stories are an integral part of the Jurassic Park Franchise. They also provide a charming historical backdrop for the Amber Museum.

It was 1865, give or take a year. Young Emil Bentz sailed from Germany to Puerto Plata, Dominican Republic. Along the way, he fell in love with Maria, the captain’s daughter. They married. Together with his family, Bentz operated a hotel, grocery store, and sugar mill.

As their family and fortune grew, the Bentz’s commissioned a famous architect to build the Villa Bentz during the early 1900s.

Fast forward half a century and we meet yet another couple. Didi and Aldo Costa moved from Italy to Puerto Plata in 1970. They were enchanted by “the blue and uncontaminated sea, luminous skies, and green panoramas, rich of tropical vegetations, rivers with crystalline waters.”

Soon, Didi began collecting the beautiful amber stones – not just for their visual appeal, but because of their scientific value. In time, they decided that their fossil collection was “too important to have hidden in a safe,” according to the Amber Museum website. With assistance from Brandt Ghepart of the Cleveland, Ohio Museum of Natural History, the Amber Museum opened in 1982.

My husband Marc and I walked through Parque Central, the town center, past the towering spires of the San Felipe Cathedral. The museum stood on the West corner of the crossing of Calle Duarte and C. Emilio Prud’homme streets, gleaming white in the tropical afternoon sun.

At the museum’s front gate – a miniature version of the one that inspired Jeff Goldblum’s character Ian Malcolm to ask, “What’ve they got in there, King Kong?” – is a familiar red, black, and yellow logo. Only… instead of a T-rex, a broken lizard lives above the text.

As museums go, the Amber Museum is a small one. Amber glows in its display cases. The most famous display is a complete 40 cm (15.7 in) long lizard encased in amber, dated at 20 million years. Its tail is detached but still present, whispering of the animal’s final moments. Was it fleeing a predator, shedding its tail as some lizards do today?

The stone could have fit in the palm of my hand. It wasn’t beautiful in the manner of a diamond or a ruby. It didn’t sparkle. Yet it left me breathless. Why?

As a frequent museum-goer, I’m attracted to objects that bridge space and time. It’s like the final scene in the 1960 film adaptation of H.G. Wells’ The Time Machine:

“I think I understand. You see the imprint? This is where the time machine originally stood. But the Morlocks moved it. They dragged it across the lawn, right into the Sphinx. Right there. And Weena was standing here when he last saw her. Right here! The same space in a different time.”

Yes, this little time traveler was my connection to a time long past, right there on that same island. No, the museum’s amber wouldn’t yield the raw material to resurrect the dinosaurs as it had in fiction. But this gecko was real. He had hatched, hunted, grew, evaded predators, perhaps reproduced. The trees that produced the fossilized sap are now extinct, but lizards are still a major part of the island’s ecosystem – even after most of the terrestrial mammals of the island were wiped out by human activity. Each and every inclusion allows us to piece together what life was like long before it was known by man.

A small display outlines the connection between the museum and the film – fittingly small, I think. The photos of the fictional characters and the replica of Richard Attenborough’s mosquito-in-amber topped cane do not detract from the reality of what surrounds them.

As you exit the museum, you will pass through its gift shop, where you can pick up a Jurassic Park-style t-shirt or jewelry crafted of Dominican amber. Local vendors also set up tables selling handicrafts of all kinds.

When we got back to our accommodations that evening – one of four apartments in a bungalow at the Blue Jacktar – we found we had a guest. A tiny anole lizard had slipped in under the door.

I picked it up gently to place it outside. I couldn’t help but compare it to the gecko encased in amber at the museum – both so perfect and unchanged through the passage of millions of years.