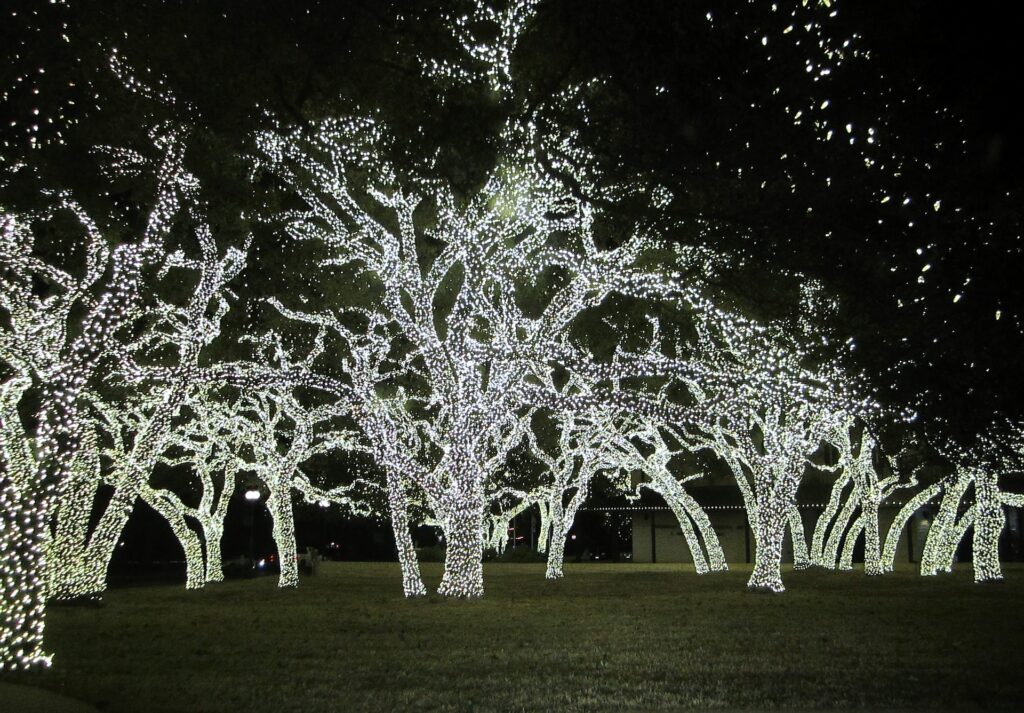 December is a month filled with many religious and cultural holidays, such as Christmas, Hanukkah, and Kwanzaa. During this season, Texans celebrate these holidays with unique customs and traditions. With a population fast approaching 30 million, the diversity of the Lone Star State is particularly demonstrated in the last month of the year.

Texan Customs and Celebrations of Christmas

The Christmas holiday can be celebrated as both a religious and cultural holiday. Individuals in the Christian faith celebrate the birth of Jesus Christ on December 25th, and Christmas was first celebrated in Rome in 336 A.D. The Christmas holiday is observed in many ways across the world, and in the United States, nativity scenes and trees are erected, gifts are purchased, houses are strung with Christmas lights, and milk and cookies are left out for a late-night visit from Santa Claus.

Though there are many different renditions and celebrations of Christmas, Texans have unique customs when it comes to celebrating. For example, many Texas cities focus on elaborate and ornamental displays. Johnson City has earned itself the nickname “The Twinkliest Town in Texas” with a holiday light display so large that NASA reported seeing the sparkling attraction of more than 2 million lights from the International Space Station. For the last 31 years, Johnson City’s “Lights Spectacular” display has proven that whatever is not bigger in Texas may certainly be brighter.

​Other Texan customs include hanging wreaths made of barbed wire instead of lush greenery as a nod to the state’s rustic roots. Luminarias light walkways, and in depictions of Santa’s sleigh, Texas Longhorn cattle replace the more traditional Rudolph. Christmas foods enjoyed by Texans often include tamales, barbecue, and menudo.

Hanukkah, also known as “The Festival of Lights,” was established in 165 B.C. It is a Jewish celebration honoring the victory of a small Jewish army known as the Maccabees. The Maccabees fought against the Syrian Greeks to maintain their religious liberty and reclaim the Second Temple of Jerusalem. Upon rededicating the temple, the Maccabees found there was only enough oil to light the menorah for one night. However, the oil is said to have burned for eight nights, which is why Hanukkah is an eight-day celebration. Interestingly, the word “Hanukkah” is the Hebrew word for “dedication.”

Since Hanukkah is connected to the Jewish lunar calendar, the date is not the same every year. This year, Hanukkah begins the evening of Sunday, November 28th, and ends the evening of Monday, December 6th. Each night, another candle is lit until all eight are burning bright. Typically, this commemoration is accompanied by charitable acts, giving gifts, blessings, singing, prayers, dreidels, and fried foods, such as potato pancakes (latkes) and jam-filled donuts (sufganiyot).

Texans honor the time for family, friends, and community by hosting live events and celebrations throughout the state. In San Antonio, residents hop aboard for a cruise down the San Antonio River while enjoying brisket, donuts, and latkes. Meanwhile, Sugar Land is gearing up for its Giant Menorah Lighting Celebration on the Sugar Land Town Square this year. The free event is open to the public and will feature arts and crafts for children, performances, live music, dancing, Israeli food, and more.

Similarly, Galveston is preparing its landmark Saengerfest Park in the historic Strand district for a large menorah-lighting ceremony. In addition to delicious food, there will be a free raffle, live youth band, and greetings from dignitaries. Despite what city they live in, many Texans in the Lone Star State celebrate Hanukkah with grand celebrations centered on community.

Commemorating and Celebrating Kwanzaa in Texas

The seven-day celebration of Kwanzaa commences on December 26th, the day after Christmas. Each night, a candle is lit on a seven-pronged kinara that represents each of the seven principles. The corresponding principle is then reflected on and celebrated, often incorporating elements such as songs, dances, African drums, poetry readings, storytelling, and a communal meal.

In the Lone Star State, many Texans come together to celebrate Kwanzaa, honoring African-American culture and the importance of community. Some of the largest Kwanzaa celebrations, events, and festivals in Texas take place in populous areas, such as the cities of Houston and Dallas.

Even at the height of the coronavirus pandemic in 2020, large virtual Kwanzaa celebrations were organized in Texas. There were virtual arts and crafts classes for children who made felt shapes according to African folktales, African-inspired jewelry, and West African Adinkra banners with stencils. Other virtual classes and events included dancing, drumming, singing, storytelling, poetry reading, and candle lighting.

This year, some Kwanzaa celebrations in Texas will be held in person once again. In Houston, a festival is scheduled to be held on Martin Luther King Boulevard, featuring an African marketplace with vendors, a drum call, and a Kwanzaa ceremony. Likewise, the Bruton Theatre in Dallas is hosting a Kwanzaa Concert with 200 students from surrounding schools who will sing and perform an evening of hymns, spirituals, gospel, and classical music. Thus, many Texans unite to honor Kwanzaa, rounding out their celebrations with a hearty “Harambee,” which is Swahili for “let’s pull together.”

Key Takeaway The last month of the year is filled with various religious and cultural holidays, including Christmas, Hanukkah, and Kwanzaa. Texans gather near and far to celebrate these occasions, often with community-centered events that the general public can enjoy. Between elaborate displays of Christmas lights, Hannukah-themed cruises, and Kwanzaa ceremonies, Texas boasts some unique ways of celebrating the holidays