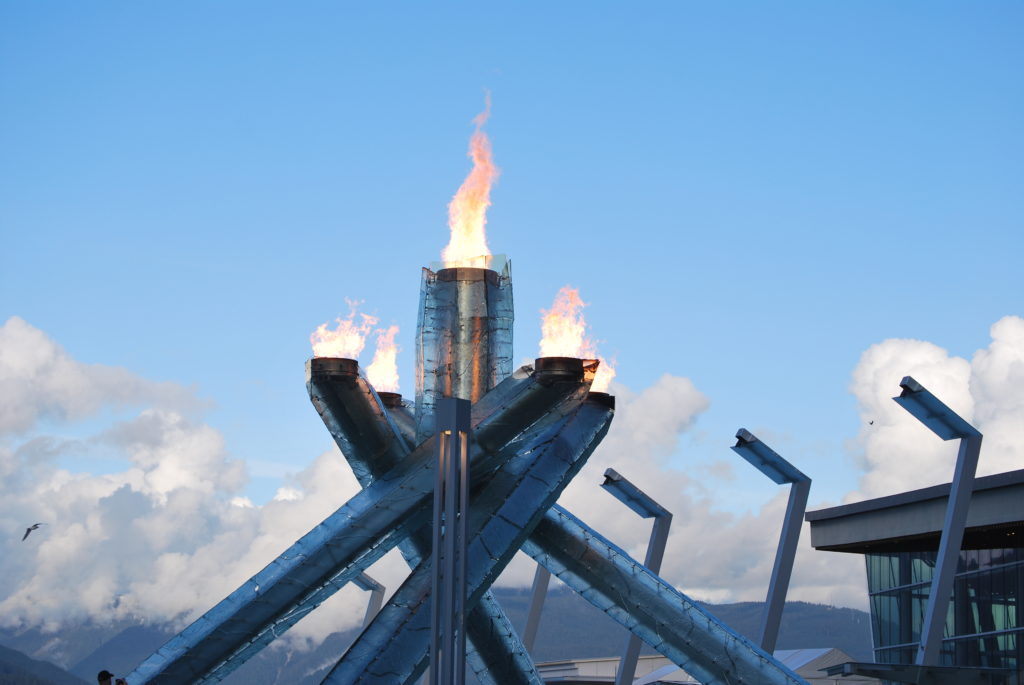 After several flight cancellations from Washington DC we finally arrived in Vancouver at 11:15pm on Saturday evening, February 13, 2010.  Regrettably we missed the Opening Ceremony but in our short time here we have experienced a wonderful flavor of cultural diversity and national spirit.   We have been to Vancouver many times and each time our feeling about this city and our experience here is very special.

After obtaining our media credentials at the British Columbia International Media Center (BCMC) in Robson Square, Vancouver, we went on a walk about.  We’ve been to Vancouver many times but the Olympics has brought a positive and exciting energy to the city.  With over 250,000 visitors there is a bit of chaos that comes with large crowds but it is a civilized chaos.  Everyone is enjoying the Olympic experience and, for those of us who have traveled from a winter wonderland, we are enjoying the mild temperature and sunshine.  (We’ve spotted many people in tee-shirts, shorts and flip flops.  It truly is not that warm–maybe an average of 50 degrees farenheit, but for some it may be more like summer.)

Robson Square is the heart of the city and the location where all of the outdoor activities are taking place.  We are headquartered in the BCMC at Robson Square and are, thus, in the mix of major activities from the outdoor skating rink to the urban zip line and many cultural activities.   Only a few blocks away on the Waterfront is the Olympic Flame that sits ablaze on an artistic structure with the majestic snow-capped mountains as its backdrop.  Throughout the streets there are hundreds of snowboard looking structures that have been transformed into artistic features (similar to the many elephant and donkey artworks seem through the streets of Washington DC).

Our first Olympic day through downtown also provided some comic relief.  As we traveled through downtown Vancouver we came across the expansive motorcade of Vice President Joe Biden as he headed toward the figure skating venue.  One gentleman from England couldn’t believe the size of the motorcade and he remarked, “All this for one bloke?  Is this carbon neutral?!?”  That put a smile on the faces of many people who became annoyed at the long wait along the street they were forced to endure.

Now our station in the Media Center isn’t without multiple perks and enjoyment.  We’ve met several journalist–some from DC–and we’ve sat in on a few press conferences, including one with the Canadian women’s modul team.  We were also treated to a tasting of West Coast oysters from various Canadian provinces.  There are multiple video feeds throughout the center so we have advance notices on medal winners and qualifiers.

All in all our first day was very eventful and we are enjoying the experience.