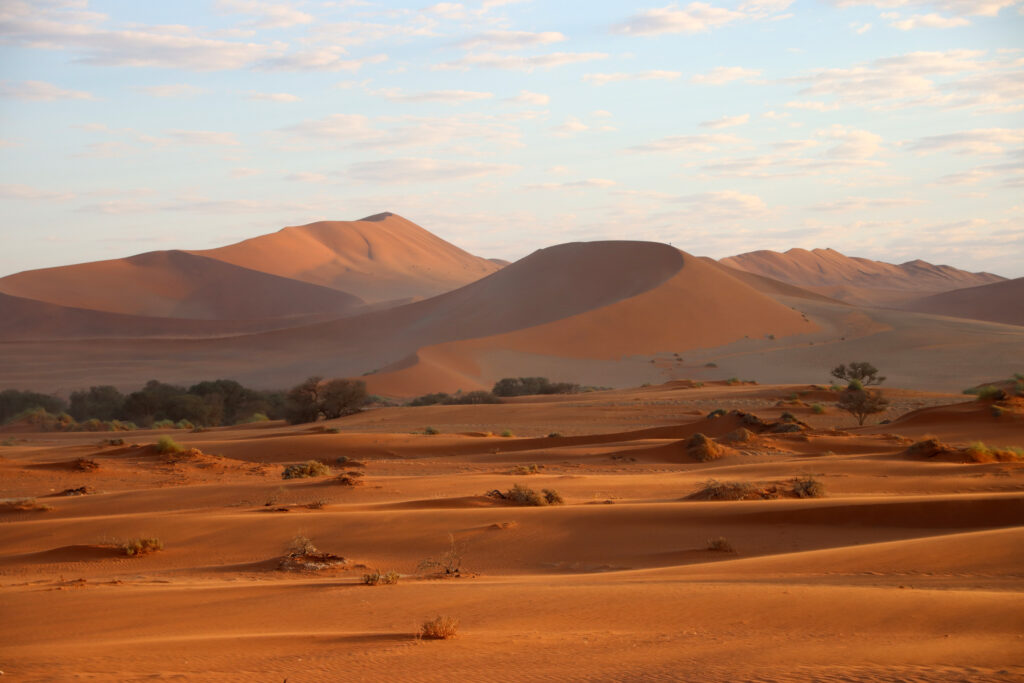 At the end of my second week of traveling through Namibia during the pandemic, I reached the most-anticipated stop of my journey within the Namib-Naukluft National Park: Deadvlei, a white clay pan that represents an inevitable stop for nature lovers and photographers. I will never forget the second I stepped into that arena-like plateau. While staring into the distance, a feeling of being totally out of place ran through my body. It felt like somebody dropped me on a different planet. What made this feeling so intense was not the clay pan itself but the trees sporadically spread out over the entire plateau area. Not normal trees though!

These particular trees died almost 1000 years ago but got preserved by the harsh climate instead of decomposing. I looked through the viewfinder of my camera and snapped a beautiful picture, showing one isolated tree with a sand dune (Big Daddy Dune) functioning as a reddish backdrop. When I moved my eye away from the camera, I stared straight ahead. Almost impossible to get the entire sand dune into one field of vision, I slowly moved my head up and spotted a person at the top. “Wouldn’t it be awesome to be up there?” I asked myself.

Determined to take even more unique pictures from the sand dunes’ top, I started to investigate my surroundings. Moving to the dunes’ bottom to then proceed straight up didn’t seem smart, given the incline that I would have had to climb. To my left, I noticed the bottom of a much lower sand dune that, later on, turned towards Big Daddy Dune. I double-checked how much water I had left in my backpack (about 1 liter) and started my climb, assuming that the smaller dune would give me a less steeply incline.

Fifteen minutes into my climb, I noticed two things. First, the view of a sand dune I was on, wriggling its way into the far distance of the Namibian desert in front of me, was beyond breathtaking. Secondly, this journey was not even half as easy as I had expected.

Every time I put one foot down, the hot and orange sand swallowed it up to my ankle. To maintain a general sense of orientation, I kept looking at the weak GPS signal on my phone, which, unfortunately for my motivation, didn’t seem to move at all. As I progressed further upwards, I witnessed some other folks falling and sliding down the main sand dune while approaching to do the direct climb that I gladly ruled out at the beginning of my ascend. Another 20 minutes later, I had already stopped 5 times. The heat started to take a toll on me. My back hurt, I started to feel sunburned, and I also anticipated running out of water within the next 30 minutes. However, driven by my intention to reach the top, I was not ready to turn around just yet.

A total of 75 minutes passed when I reached the final section of my climb. I was so close and yet felt so far away. The sand dunes’ top was technically right in front of me. What separated me from my final destination was one last stretch. One last uphill. This time, however, this was the steepest so far.

Knowing that I would run out of water, I kept reminding myself to slow down and not tire myself out entirely. With baby steps, I managed to reach the very top somehow. I now overlooked the entire clay pan and saw a few people struggling to get up the dunes, frequently falling and turning around towards the bottom (which I should have probably done earlier as well).

Before I even thought about taking pictures, I had to sit down. My entire body was in pain. My legs couldn’t carry my weight anymore, and my face was completely sunburned. Another factor that increasingly contributed to my suffering was the wind. What started as a mild breeze at the bottom turned into an enormous sand storm. The combination of a lack of water, direct sun exposure, and strong desert winds chapped my lips to the point of splitting open.

Hoping for a happy ending

While fully aware I was all by myself up there; I had to avoid the worst-case scenario, meaning passing out from dehydration or overheating, at all costs. I spent only 5 minutes taking pictures and decided to make my way back in a straight line. From where I was standing, I could even identify the tree I was taking pictures of in the valley. The very location from where I spotted the person was exactly where I was now. I shouldered my backpack, held on to my hat, and ran down the sand dune (which was surprisingly a lot of fun given my conditions at the time). Once I reached the plateau, I slowly made my way back to the car, where I had a few liters of water. My first stop on the way of the national park was dedicated to the purchase of a lip balm. After patching up my lips and neutralizing my excessive rehydration, I was able to enjoy the views on my way out of the park during sunset. Looking at my pictures now reminds me of a journey that could have ended otherwise. Traveling without proper sun protection and excessive volumes of water? Never again.