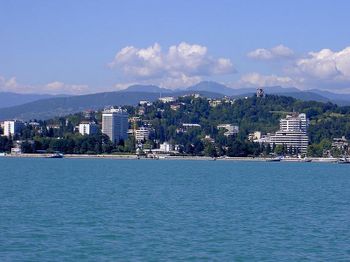 One of the biggest events of next year will grasp the attention of the whole world and will bring into attention the Russian resort city of Sochi. Unknown to many people, that think about Russia and only imagine its vast land with plains, mountains, Siberia and the tundra, it does also have some excellent summer sea resorts, the biggest and most famous being the city of Sochi, located in the southwestern extremity of the country, south of the Caucasus Mountains and by the Black Sea coast. This is also considered one of the longest cities in Europe, spreading along about 145 kilometers of the coast. Then again, if you imagine a mild climate with hot and sunny summers and mild winters, with warm weather and waters, you will be right, as the city features a subtropical climate and is surrounded by green forests.

This is somewhat intriguing when one knows that Sochi will be the host of the 2014 Winter Olympics, but the truth is that Sochi is also close to the high mountains, and the nearby resort of Krasnaya Polyana will also host some events. In the last years, the city has seen major changes, with the development of many new venues and facilities to accommodate the sporting events and the international delegations. Among others, the city now features an Ice Dome, Skating Center, Skating Palace, Olympic Stadium, Olympic Village, new ski slopes and many others. Nevertheless, this will be the warmest city to ever host an edition of the Winter Olympic Games. The hospitality industry of the resort has also been improved greatly, modernizing and opening new hotels, restaurants and other facilities. Sochi will probably see the arrival of thousands and thousands of tourists during the games, both supporters and other people interested by the greatness of this event.

Apart from this special sports competition, Sochi represents a major tourist destination on its own, although it is mostly famous inside Russia, with an estimated 2 million people visiting the beaches of the city during each season. It is considered a rather higher class destination, with the elite of Russia having their own villas and summer residences in Sochi. There are also other interesting attractions to visit in this city, except the amazing beaches that stretch for miles along the coast. The city and the region have experienced a rich and troubled history, with many migratory population passing by and influencing its culture. The main landmarks in Sochi include the Michael Archangel Cathedral and Statue, the Tree of Friendship, the Winter Theater, Riviera Park, the Art Museum, the Stalinist buildings, the Godlik Fortress, Loo Temple, the History Museum, the Dendrarium and many others, including the World Heritage Site of the Caucasian Biosphere Reserve.