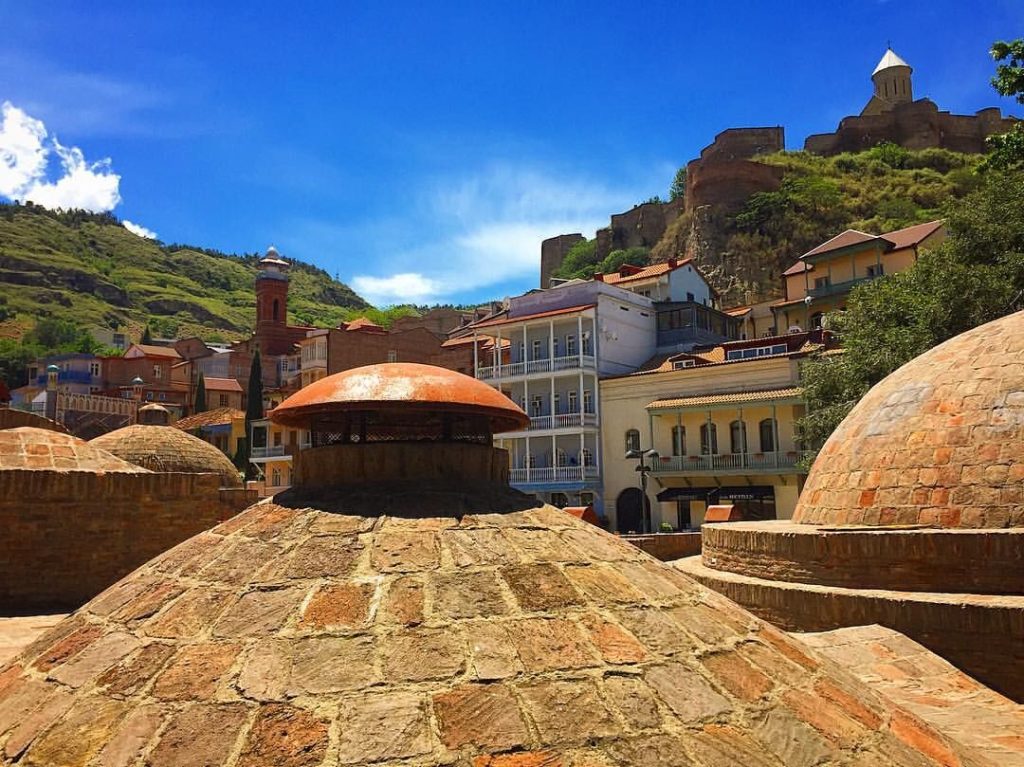 By Sarah May Grunwald | March 26, 2019 EuropeExperiences

The Georgian capital Tbilisi’s name derives from a word that means warm place. The word applies to both the glorious sulfur baths on which the city was founded, as well as the generosity and warmth of the Georgian people.  A trip to the baths allows visitors a chance to luxuriate in the soothing hot waters, which are part of the centuries-old history of this Caucasus city.

The Legend of the Springs

Georgia, a former Soviet province at the crossroads of Eastern Europe and Western Asia, achieved independence in 1991, but has history going back to biblical times. Its capital was founded when, according to legend that dates back to the 5th century, the Iberian King Vakhtang Gorgasali I was hunting with his falcon and shot and wounded a pheasant. His faithful falcon went to retrieve the bird, but did not return. The king and his army searched far and wide for the falcon and came across both birds boiled to death in the hot sulfur springs. The king was saddened at the loss of his bird, but decided it was a good omen. He built a city on the site of the sulfur springs, which he called Tbilisi to reflect the warmth. Across the river from the baths, stands a large monument of the king on horseback, watching over the city he founded.

Following the Smell to Find the Baths

The baths are in the Abanotubani area of old town, housed in beehive-shaped red brick domes that are reminiscent of both Etruscan funeral mounds and of a 1970s sci-fi flick portraying the future. Visitors can find them by the smell alone, which is reminiscent of sour eggs, though the odor becomes unnoticeable in the baths.

Hot sulfur water is touted as helping a variety of ailments including skin disorders, arthritis, autoimmune disease, muscle tension and sports injuries. The Tbilisi baths are designed to allow visitors to luxuriate in the warm bounty of the earth for a healthy and relaxing experience with friends, family, strangers or alone.

Experiencing the Waters for the First Time

There are several bathhouses to choose from in Tbilisi, but I visited the Bakhmaro bath on Grishashvili 5, where I made an appointment in advance. I reserved the largest private pool. When I arrived, I opened the door to an oasis: a private pool in the center of the room that brought to mind a full-immersion baptismal.

The water temperature was perfect. It was hot, but not overwhelmingly so, and there was space for at least twenty people. There was also a sauna, showers, and an ice-cold bath. Each room sits under an individual dome with small openings that allow humid air to pass. Simple, white tiles decorate it and the rooms contain at least one marble slab for massage.

In my private room, there were two marble beds for massages and scrubs (both part of the package). I entered the warm pool and sat there, relaxing and letting the water wash away the day’s accumulated dirt from my body and the tension from my soul. The sulfur springs flowed continuously, renewing the pools as I sat.

Services in Addition to Soaking

After about twenty minutes, a topless lady came to scrub and massage me with a special exfoliating glove similar to those used at a Turkish hammam. The baths are segregated, so women scrub women and men scrub men. If men and women go to the baths together, they must take a private room and they will not be offered massage or scrubbing services.

I was taken care of by a lovely woman with a gentle face and strong hands adept at removing dead skin. My scrub revealed a layer of skin I didn’t know existed. Who knew I had freckles? After exfoliation, she massaged me from head to toe and I felt like butter under her warm hands. Afterward, she released me back to the warm pool, where I spent another 45 minutes soaking.

Everyone has bathing or showering rituals, but nothing compares to an intimate, sumptuous, and invigorating full-body deep exfoliation. The Tbilisi baths are a luxury few in the West experience. Usually, only our mothers bathe us. Even then, baths between a mother and child end in childhood, after which we begin to bathe alone.

Allowing a stranger to touch and bathe you—without a common language—can be intimidating. Eye contact, smiles and hand gestures were our only language, yet I knew when I needed to turn over or lift up my arm.

In the warmth of the springs under a white tiled dome, I felt every nerve and muscle of my body relax. I focused on my breathing; I meditated and felt deeply relaxed and sleepy. Afterward, I plunged into the ice-cold pool to awaken myself.

The use of hot and cold water therapy has been found to have cardiovascular benefits and to help migraine sufferers, among other ailments. My body stayed warm despite my quick cold-water plunge.

The heat of the springs can make you feel slightly drained, so ordering tea is a great option to feel revived. Many locals suggest drinking Borjomi mineral water. It is a salty sparkling water that is said to replace mineral salts lost during baths, exercise, or a night of drinking.

After the bath, I was reinvigorated and ready for the workday ahead of me, which meant speaking to a room full of colleagues. A visit to the sulfur baths is an essential part of the Tbilisi experience. The springs are a gateway to understanding the foundation of the city. They are a part of life and not just for tourists. 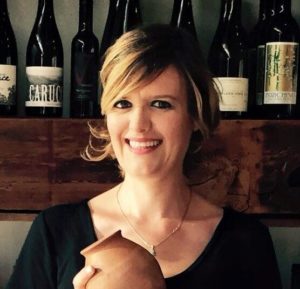 Sarah May Grunwald is the owner of the Tbilisi based food and wine tour company Taste Georgia. She is a certified Sommelier, former professor of wine and current WSET Diploma candidate. In addition to natural wine, Sarah is passionate about cats, organic gardening, her dog Chardonnay, and her 10 other dogs and cats.

More articles by Sarah May Grunwald