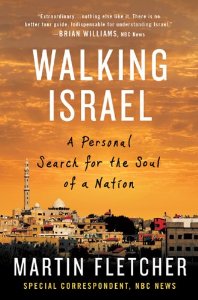 The reason I wrote “Walking Israel” is that the view of Israel in the media is too narrow. So many people ask whether it is safe to visit Israel. Then a week after arriving they call and say, Wow, this is such a great place, I had no idea. That’s what I wanted to write about: that great place about which people have no idea. I love to walk and see things slowly, and fully. In my day job as NBC News foreign correspondent, it’s the opposite – an insane rush. So I decided to take it easy, walk the whole coast of Israel, and look at the country from a fresh perspective. After all, this is the most interesting hundred miles of coast in the world – think of the Bible, Alexander the Great, the Romans, the Crusaders, Saladin, the Turks, Napoleon and today’s Israel – crazy how much goes on here when you think Israel’s coast is only the length of Long Island.

Most news coverage and books about Israel concern events to the east of the Green Line, Israel’s border with the West Bank – the fighting, the settlers, the occupation, east Jerusalem. The only time you hear about the coast is when there’s a bomb or rockets. Yet 70% of Israel’s population, Arabs and Jews, coexist in relative harmony in the coastal plain – you rarely hear about them. So by walking along the coast, meeting the people, strolling through the towns, you get a completely fresh view of Israelis, a much more accurate one. It’s like a different country from the one we always hear about.

The book is not a whitewash, far from it. Yet the problems that face the people are not always the problems the world knows about. I came across young people agonizing about their role in the army, holocaust survivors lamenting the way Jews ignored them when they arrived in Palestine, kibbuzniks enjoying their lives in the new form of privatized kibbutzim, Jews under rocket attack from Gaza, Israeli Arabs hoping that someday “something will happen” so that the Jews will leave; and throughout my trek I deepened my understanding of this wonderful country.

I just wish I’d walked the coast years earlier when I was younger and stronger. It was tough going, very hot, deep sand, and when I finally reached Gaza, after leaving the Lebanon border two weeks earlier, all I really wanted was to go home and forget about the whole stupid project. But after a year’s research and writing, I feel it was the best thing I’ve done in 35 years of reporting in Israel.

*Editor’s Note:  We enjoyed an informative and inspirational conversation with author Martin Fletcher about his experience “Walking Israel.”

Pick up your copy of Walking Israel HERE.

Martin Fletcher is the author of “Breaking News” and “Walking Israel,” and a widely respected television journalist.  The winner of five Emmies, the duPont, (the television Pulitzer), and many other awards in America and Britain, Martin began his career at Visnews and the BBC in London and joined NBC News in 1977 where he has reported on most of the world’s major events for three decades.  Martin continues to report for NBC as a special correspondent after resigning in 2009 to write books.