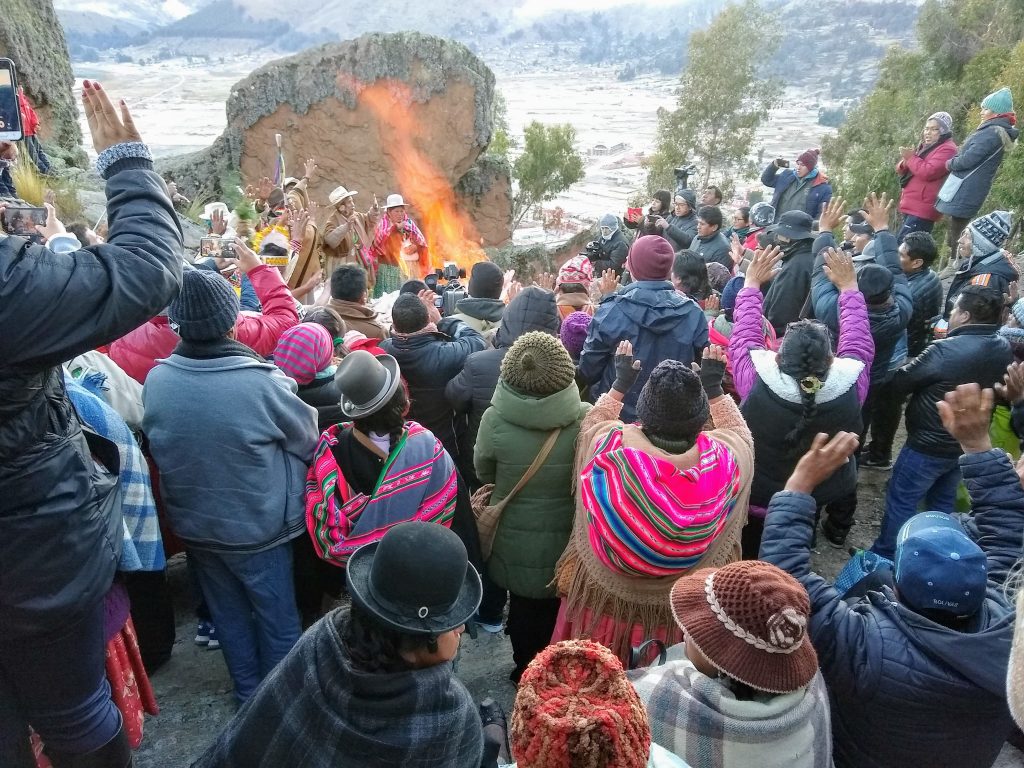 For Americans, the visa requirements are extensive. In addition to paying $160 each in unblemished, unfolded US currency, we were required to provide passport-style photos, evidence of yellow fever vaccinations, financial documents proving access to $10,000, confirmed reservations for our entire stay, and tickets out of the country. This meant no fewer than three trips to the Bolivian consulate in Puno, Peru, as well as some serious convincing of the consulate representative that — despite valiant attempts — we were unable to purchase bus tickets out of Bolivia before entering the country.

La Paz: Straddling the Past and Future

Barely 24 hours after crossing the Bolivian border, we were arguing with a thief at the Sunday flea market in La Paz.

Someone had shoved me into our travel companion from behind while two others penned him in from the front. One of them liberated his cell phone from his front pocket. A dozen locals pointed out a woman they identified as the thief, surrounded her, and demanded that she hand over the phone. But her accomplices had already absconded with it. As a bonus for our first full day, we spent a significant amount of time avoiding a rabid dog who followed us through the market, foaming at the mouth.

We spent a few days acclimating to the altitude in La Paz, a sprawling city straddling the past and the future. Indoor heat hasn’t yet made its way to the average home, hotel, or hostel, but the Teleferica — a modern, Swiss-made gondola system — whisks passengers across the traffic-clogged city. It offers stunning views of nearly every neighborhood, from the fume-filled flats to the affluent and airy communities perched on impossibly steep hillsides. The Teleferica provided a stark contrast to the squeaky, repurposed school bus and broken down boat that delivered us to the shores of Lake Titicaca for the winter solstice a few days later.

Our solstice sojourn in Copacabana started before sunrise on June 21, when we joined a two-part pilgrimage of a few thousand locals to the archeo-astronomical wonder known as the “Horca del Inca.”

We began the breathless trudge up the steep Kesanani hillside before 6:00 am to witness the annual ritual welcoming of the return of the sun to Lake Titicaca — the birthplace of the Incas. Thanks to the high altitude (3,800 meters) I stopped frequently to catch my breath while sandal-clad grandmas in bowler hats, puffy layered skirts, and woolen leggings waddled past. Children skipped by at speedy clips while their parents eased around me, loaded down with blankets, firewood, and thermoses of hot tea.

When we reached an open area near the top of the hill, hundreds of people were already gathered around a central circle of shamans, local officials, and a young man decked out in Inca-style finery, including a golden crown and flowing cape. After shushing the murmuring crowd, the shaman described the history of the ancient site and the significance of the winter solstice.

Significance of the Sun Gate

For a brief window of time on the winter solstice, soon after the rising sun clears the cleaved mountain tops in the distance, solar rays stream through a strategic piercing in a nearby rock. The rays display a circular glow on a rock slab perched horizontally between a vertical pair of stone pillars overlooking Lake Titicaca. This trilithic “sun gate” is just one of many “puertos del sol” created by the ancient civilizations whose descendants populate the region.

When the Spanish arrived in the 1500s, they destroyed many of these sun gates, which didn’t comport with their Catholic religion. But they left this one intact, presumably because they assumed it had a more practical purpose: execution. They dubbed it “Horca del Inca” (Gallows of the Inca), though it wasn’t built by the Incas, and was never used to hang people. Instead, it was constructed more than 3,000 years ago by the Chiripa people, who predated the Incas. They used it to mark the arrival of the winter solstice and facilitate worship of the Sun God.

The shaman instructed us to raise our hands to welcome the approaching sunrise, embrace the light by hugging ourselves, then carry the warmth and blessing around the corner to the Horca del Inca – more accurately known as Pachat’aqa – and await the solar light show.

Welcoming the Return of the Sun

As the rising sun began to glow behind the distant mountain peaks to the east, locals approached the shaman circle to splash alcohol onto a waist-high collection of offerings, occasionally taking sips of the alcohol themselves. Once the sun was in full view, the offerings were set afire. As the heat from the fire intensified, the shaman shouted, “Viva Bolivia! Viva Copacabana! Viva el Lago Titicaca!” to which the crowd responded, “Ay! Ay! Ay!”

Though my hands and feet were freezing, my heart felt warm and full of light. After embracing ourselves and each other, we made our way to the Horca del Inca to await the sacred solar phenomenon. The Incan warrior — now joined by two young women also dressed in ritual Incan clothing — stood at the base of the Pachat’aqa for a blessing by the Shaman.

Finally, a splash of light illuminated the vertical rock on the left, and a rough circle of sunshine appeared on the horizontal beam. Cheers of “Ay! Ay! Ay!” arose from the crowd.

By the time the sun spot crept from the horizontal beam to the monolith on the left, many worshippers were already making their way down the stone steps, pausing frequently to admire the stunning views of Lake Titicaca in the sparkling sunshine. A raucous, roaming party progressed through the town and continued into the wee hours of the next morning, long after we had drifted off to sleep in Bolivia‘s warm embrace. 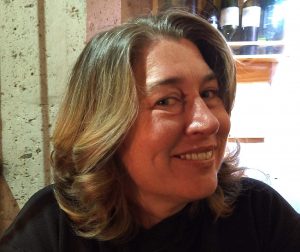 Reneé Alexander’s first road trip took place on a motorcycle, at the tender age of 4. Sandwiched between her mother and father, straddling the saddle of a Yamaha, she and her entire family set out on a midnight run to Myrtle Beach, South Carolina. Since then, she has driven across America with a dog, two cats, and three snakes; commandeered camper vans through New Zealand and Australia; crossed the Guatemala/Honduras border in the back of a pick-up truck; and co-piloted a tuk-tuk 2,000 miles across India. Currently, she is traveling the world for a year with no specific agenda.
Share
Tweet
Pin
Share