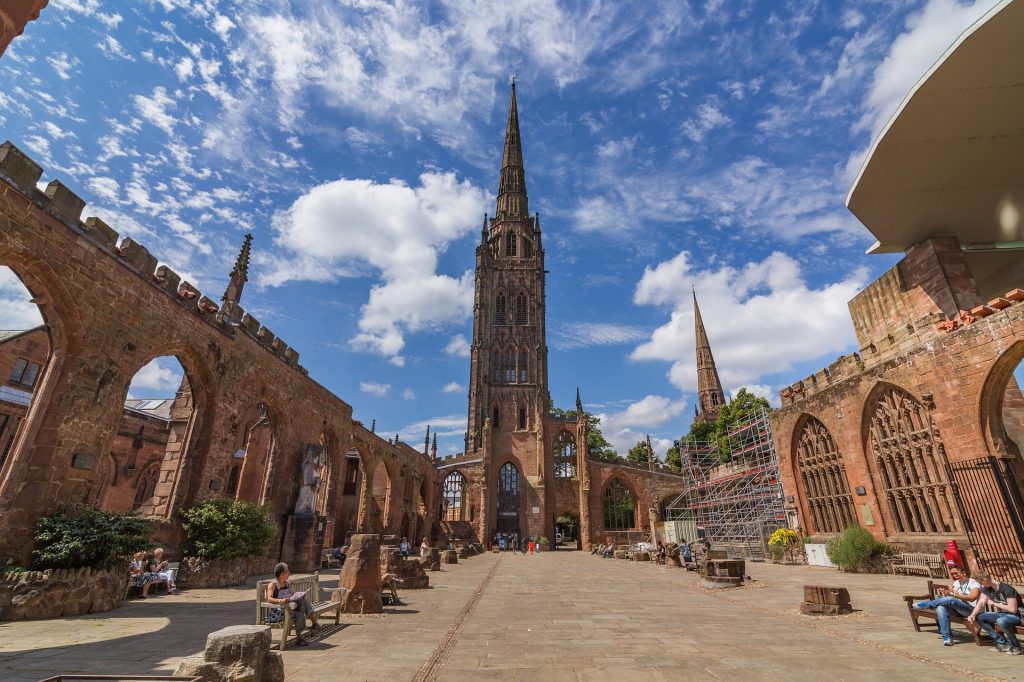 Coventry doesn’t feature much on most people’s travel bucket lists. It’s a city that is known predominantly for being razed to the ground during the Second World War and then rebuilt in questionable design. It regularly makes the list of the least liked places in the UK. But things have changed in Coventry, and people’s ideas about the city aren’t actually accurate with what’s happening there. As Coventry prepares to be the UK City of Culture in 2021, the city is once again effortlessly combining industry with culture, and there’s plenty to make at least a short break here a great idea. Here are a few reasons why you should add Coventry to your list of places to see.

Coventry has not one, not two, but three cathedrals. St. Michael’s Cathedral, destroyed in the Blitz, is the most famous one. All that remains of this grand medieval Gothic structure are the tower, spire, outer wall, and the tomb of its first bishop. They have been left in ruins as a reminder of the bombings and of what war brings. St. Mary’s Priory, the second cathedral, which is also in ruins, is something of an enigma. Archaeologists have determined it was built during the 12th century. Much of the Priory’s documents were lost, along with the destruction of the Priory, during the Dissolution of the Monasteries at the hands of Henry VIII in the 16th century. The Priory featured on popular British archaeological program Time Team, which concluded that St. Mary’s could have been the largest and most elegant building in the city prior to its destruction. Finally, there is the modern cathedral, located next to St. Michael’s, featuring a stunning tapestry of an enthroned Christ, various sculptures, and its revered stained-glass windows. Visit in the morning to catch the windows at their most spectacular.

Despite being heavily bombed in 1940, Coventry still has a number of historical buildings which are worth a visit. Top of the list is St. Mary’s Guildhall, one of the finest examples of a medieval guildhall – a building used as a meeting place or as a town hall – in Britain; be sure to check out the room where Mary Queen of Scots was supposedly held on the order of her sister, Queen Elizabeth I. Other interesting historic buildings are: Bonds Hospital, a medieval almshouse; the town wall and city gates; and Whitefriars Monastery, which began life as a religious order before becoming a workhouse and refuge during the Victorian period.

You Can See Lady Godiva

If you’re not familiar with the story of Lady Godiva, you might be startled to see a statue in the city’s main square, Broadgate, of a woman riding a horse naked, while a man named Tom peeps out from a clock to catch a glimpse of her. Lady Godiva was an English noblewoman in the 11th century and, according to legend, rode naked through the streets of Coventry to protest the high taxes her husband imposed on the city’s tenants. It is said that as she did so, no one looked at her apart from one man named Thomas, who was immediately struck blind – or dead, depending on which version of the story you hear. Hence, we now have the expression ‘Peeping Tom.’

It should come as no surprise that Coventry has a firm footing in the UK arts and culture scene since it will soon be the country’s City of Culture. Coventry is home to the second largest arts complex in the UK, the Warwick Arts Centre, five miles from the city center. Shows and performances of a variety of art forms, from theater and cinema to dance and comedy are put on. If you are traveling to Coventry in July, you’ll be there for the Godiva Festival, a three-day music festival held in the War Memorial Park.

It’s a Great City for Sport

Coventry may not seem like the most obvious place to have multiple sports teams, but the city has eight, plus many other sporting events take place throughout the year. Soccer and rugby are both popular sports, with Coventry City, Wasps Rugby Club, Coventry Rugby Football Club and Broadstreet Rugby Football Club, all making their home here. There’s even an American Football team, the Coventry Jets. The Sky Dome Arena shows games by the city’s two ice hockey teams, Coventry Blaze, the men’s ice hockey team, and Coventry Phoenix, the female team, as well as showing ice dancing performances. If you enjoy speedway – a form of motorcycle racing – you can attend Coventry Bees races at Brandon Stadium; this stadium also holds regular greyhound races.

Craft Beer Is on the Rise

In 2014, the UK’s first pico-brewery – a brewery even smaller than a nano-brewery – exploded onto the craft beer scene. That was Twisted Barrel Ale, and they’re based in Coventry. At that time, they were the country’s smallest commercial brewery, although many more have popped up since then. Throughout the last few years, Twisted Barrel has reviewed and revised their beers, and are now extremely popular among the locals in Coventry. They currently have 12 regular and 12 seasonal beers; no mean feat for a brewery of their size. To sample some of their beers, head to the Tap House, located at FarGo Village, the city’s creative hub. As well as being able to taste some of their fantastic beer, the brewery also runs events during the week, including quizzes, comedy and open mic nights, and home brew clubs.

In the past, Coventry may not have had the best reputation, but it’s slowly becoming one of the UK’s hotspots for a weekend break. With plenty of sights to see, things to do, and a cool nightlife scene, there’s no reason not to visit right now.