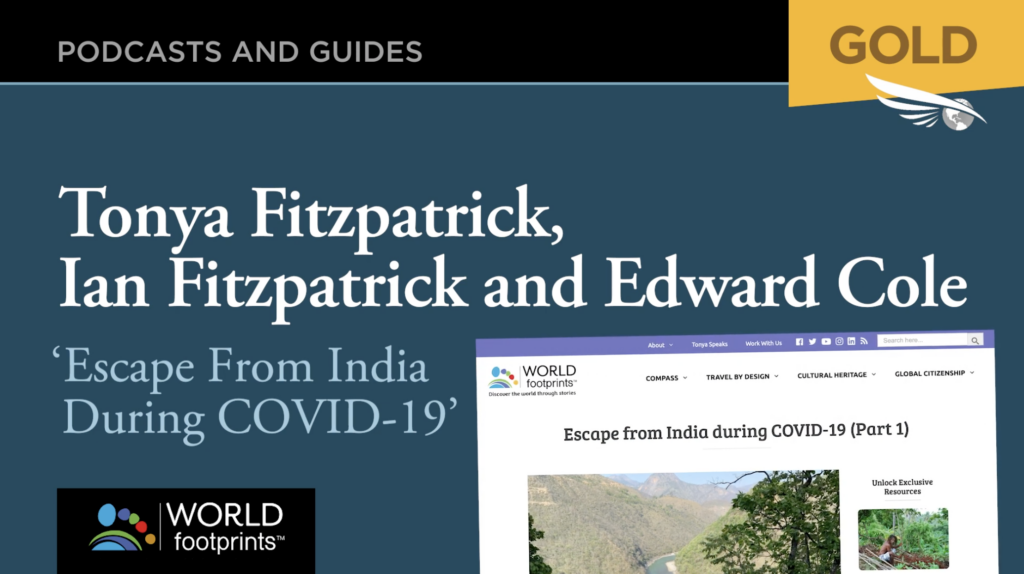 World Footprints won recognition as a top travel podcast, receiving a Gold Award in the 2021 Lowell Thomas Travel Journalism Competition. The 2021 awards were announced on October 4, 2021 at the Society of American Travel Writers (SATW) annual conference.

The podcast that earned the top award is a three-part audio series entitled “Escape from India During COVID-19.” The series recounted the harrowing journey of an American journalist and her British guide as they attempted to leave India as the virus began to cross India’s borders. The Indian government blamed foreigners for bringing the virus into the country and they started rounding them up. To date, no one knows what happened tot he foreigners who were corralled.

In recognizing World Footprints, the judges noted that the series “puts the listener on the scene” with the journalists as they run for their lives.

Hosted and produced by World Footprints founders Ian and Tonya Fitzpatrick and assisted by audio editor Edward Cole, the award-winning series is reminiscent of the big screen action thriller The Fugitive.

“We are so honored that we were trusted enough to share this frightening story,” says Tonya Fitzpatrick. “We wanted do justice to the story while also creating something that would reach listeners on an emotional level. That’s not always easy to do.”

“The prestige associated with winning a Lowell Thomas Gold Award for our podcast is enormous,” says Ian Fitzpatrick.  “This award validates our efforts to bring powerful human interest travel stories to our loyal and growing legions of followers.”

The Lowell Thomas awards are recognized as the most prestigious in travel journalism. The Society of American Travel Writers Foundation oversees the annual award competition and this year 27 judges from the University of Missouri School of Journalism selected the winners.

In the press release announcing the awards, the SATW Foundation noted that entries “were noteworthy for their style, scope and service to readers who struggled to make sense of a travelscape turned upside down by the pandemic. Winners proved their mettle by producing original, useful and often moving stories that covered the moments and moods of the past year.”

This year’s Lowell Thomas competition drew 1,278 entries for awards in 27 categories. SATW has published a complete list of winners, also shown on YouTube (below). World Footprints announcement starts at 21:11.

World Footprints is a social-impact travel media organization that connects travelers of culture and conscience through powerful storytelling.  Founded by attorneys Tonya and Ian Fitzpatrick, the Silver Spring, Maryland-based company uses podcasts, social media, newsletters and curated content on its website and other digital platforms to reach more than 20,000 unique visitors per month bounded by their common passion for travel, adventure, history, culture, humanity, and the exploration of our world.

Links to the award-winning series Escape from India during COVID-19 Part I, Part 2 and Part 3

Ian and Tonya Fitzpatrick are Founders of World Footprints and hosts of the award-winning World Footprints podcast.  Travel has always been central to their lives. In fact, Tonya only agreed to date Ian after learning that he had traveled abroad.  After a two-year courtship, Ian whisked Tonya away on a secret mission to Toronto where he proposed to her above the city in a small plane that passed another small plane carrying a banner that read: “Marry Me Tonya – I Love You”. The couple held a destination wedding on Bermuda and they honeymooned in South Africa. The rest, they say, is history…