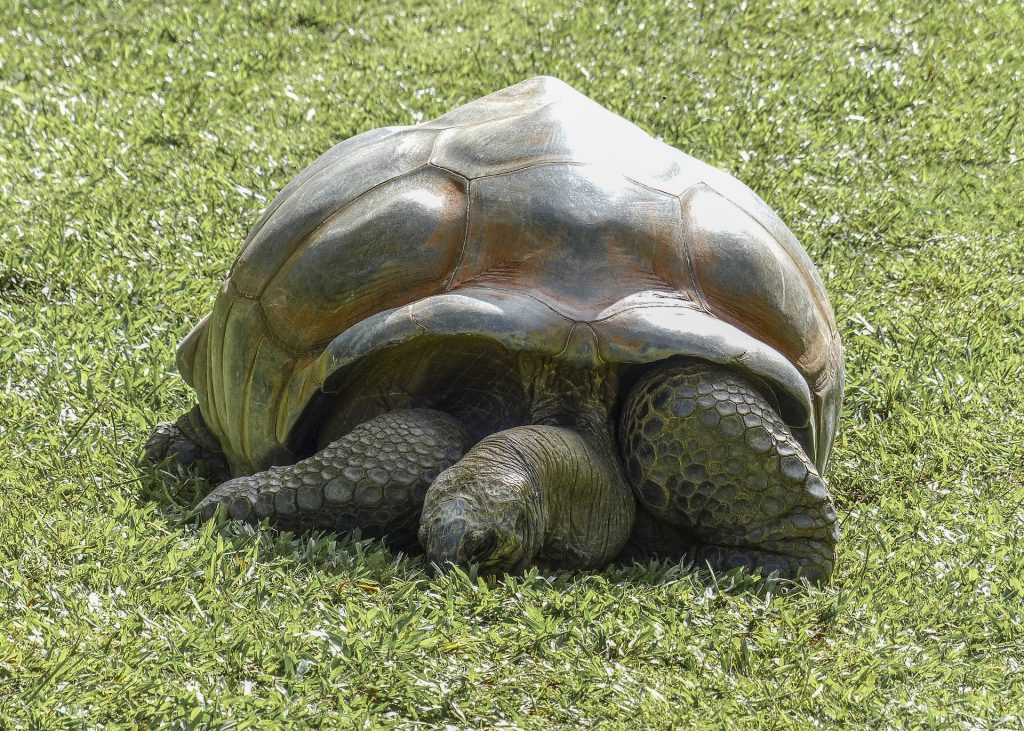 If you ever saw an Aldabra Giant Tortoise, you’d think it was a dinosaur, as they look as if they came from another time period. And, it’s possible that’s true. After all, they can live to be more than 100 years old and weigh up to 300 pounds. Of course, seeing the actual Aldabra is difficult due to the excessive number of restrictions put on visitors.

Still, the Four Seasons Desroches is your best way to see the largest tortoises in the world.

The hotel is found on the private Seychelle island of Desroches, which has a huge population of the reptiles – from newborns to more than 120 years old. The Island Conservation Society works together with the Four Seasons to care for them.

To boost their numbers, these land tortoises were introduced back to Desroches, with the Aldabra being the only remaining wild population in the Indian Ocean. Thanks to the partnership, there is now more than 150 on the nine-mile island.

Desroches Island Conservation Officer Craig Nisbet said the island is one of four outer islands in Seychelles that was chosen to help with the Aldabra population.

Guests of the Four Seasons love the idea of sharing the island with the ancient tortoises,.  Guests get to experience and see the Tortoise Sanctuary and help feed them wild mulberry leaves. They can also pet the tortoises’ heads and necks – something very few people get to experience.

The sanctuary isn’t just about bringing in tourists but making sure these beautiful creatures are taken care of.

Nisbet said the Tortoise Sanctuary offers protection to the small hatchlings that would often be vulnerable to predators such as cats, rats and the Grey Heron. There are 43 babies in the Sanctuary, which are kept a close eye on and taken care of. When hatchlings are found, they are cared for until they are big enough to be set free.

There are 22 adults in the Sanctuary and another 80 on the island itself.

Desroches wasn’t always a Sanctuary for tortoises; it was once a coconut plantation. In 2018, the Four Seasons hotel opened up and now provides every guest with an orange and cream branded bicycle to explore the area. The wild nature of Desroches has been retained, and the hotel created a castaway atmosphere.

In 2007, the Island Conservation society set up its conservation center. Nisbet said they were responsible for the island’s biological composition – clearing out the native scrub and woodland for the more profitable coconut and casuarina plantations.

He said the outer islands are under the Island Conservation Society and Islands Development Company management, which are working to bring back native vegetation and eliminate the trees and plants introduced here. This work will also help in producing the best possible habitat for the tortoises so that they can thrive in their island homes.

There are many other reasons to stay at the Four Seasons Desroches, including the food, private pools, pink peacock chairs, beach villas, morning yoga classes, spa treatments, etc. However, the biggest reason is to come check out the Tortoise Sanctuary.

This World Brief was written by Susan Powell.