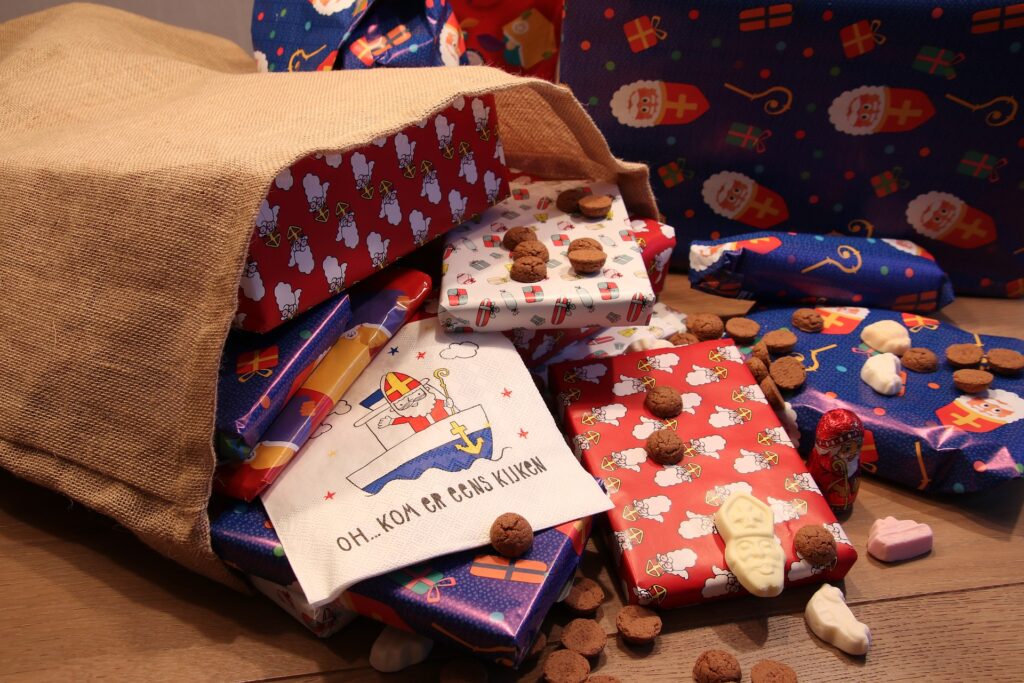 One of the most popular Christmas traditions in the Netherlands is the Christmas Packet. This is a tradition in pretty much every workplace throughout the country. Every year around Christmas time, all of the employees get a special Christmas gift box from their employer. This is a way of thanking them for all of the hard work they put in throughout the year. The Christmas gift box can contain all kinds of things. Some companies give their employees a box of fun stuff or food baskets for example, but more and more companies are taking a different approach. You will find that many companies have started giving their employees gift vouchers. It’s obviously unavoidable to choose something for a basket that every employee will like so by giving them a bunch of gift vouchers, every employee can pick something they like on their own.

During the holiday season, the people in the Netherlands have some specific foods they like to eat as well. There’s a kind of bread with almond paste on it that’s sold in pretty much every supermarket during this time and it’s called kerststol. This bread has some almonds on top and is usually sweeter as well. In the middle of the bread is some very sweet marzipan, which makes the bread so delicious. The funny thing about this kerststol is that they have it during easter as well, but under a different name. the kerststol is usually eaten during lunchtime, but many people eat it during their breakfast as well as a sweet snack on the side. You can top it off with butter or even put something like cheese on it if you like it, but many people eat it on its own.

Right before Christmas, the Dutch actually celebrate a different tradition. Sinterklaas is a festivity that was made up for the kids and has been celebrated in the Netherlands for more than 300 years now. According to the story, Sinterklaas arrives in the Netherlands at the beginning of November. Children can put their shoe in the living room and Sinterklaas will travel across the rooftops every night to put some sweets, the popular pepernoten for example, in their shoes. Of course not every parent lets their kid put their shoe in the living room every night, but almost all households celebrate the birthday of Sinterklaas every year. This is on December 5th and children will get gifts and treats from ‘Sinterklaas’.

Most people know how Christmas in the USA is celebrated with Christmas Eve and Christmas day the day after, but in the Netherlands they actually celebrate Christmas for 2 full days! Since a large part of the country is catholic, many people go to church on what we would call Christmas Eve and many families choose to open presents afterwards. The next day, they celebrate Eerste Kerstdag, or First Christmas Day, on the 25th of December. During this day, many people enjoy a nice, extensive meal with the family in the afternoon or have a special breakfast for example. December 26th is known as Tweede Kerstdag, or Second Christmas Day, in the Netherlands. During this day, most people visit their relatives or friends. You could also go to some stores for some fun shopping, since many stores are already open on this day. Second Christmas Day is also the perfect way to spend time with the other side of the family if you had dinner with the other half during the first day. This way, you can enjoy a nice meal with both sides of the family without having to stuff yourself twice in one day.

Another fun holiday tradition in the Netherlands is to do a ‘surprise’ with your family or friends. This can be done for either Sinterklaas or Christmas, but can also be for both. For surprise, you and your friends or family all write your name on a piece of paper and put it in a bowl. Everyone picks a name out of this bowl one by one and this is the person for whom they have to get a present. It’s the perfect way to give gifts in a larger group without having to buy something for every single person there. They often accompany the gifts with a self-made poem as well. These poems are written about that person and they usually incorporate jokes about their flaws as well.