Flying Under The Influence 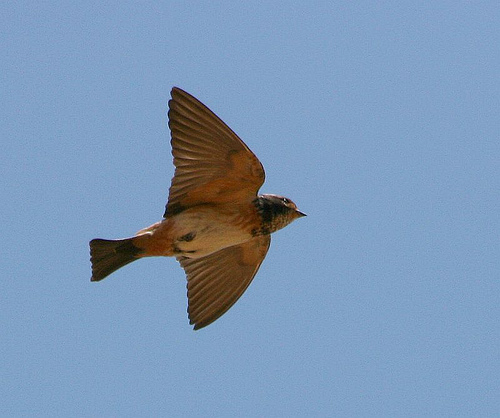 If you ever see a bird flying erratically as if it were inebriated, you're probably not seeing things! Birds in Whitehorse have been getting drunk and disorderly, forcing Environment Yukon to improvise avian drunk tanks where they can sober up.

Fruit-eating birds like the Bohemian Waxwing feast on berries at this time of year, in preparation for the deep-freeze that's to come. But the berries are fermenting due to several frosts and thaws, causing the birds to actually become intoxicated. Bohemian Waxwings particularly love the berries of the mountain ash, a very popular ornamental tree.

“Tipsy birds have a harder time controlling their flight movements, and like people, their co-ordination under the influence is wonky,” says Meghan Larivee of Environment Yukon’s animal health unit.
As a result, birds are flying into windows and glass doors, causing them to hit the ground stunned or unconscious. Environment Yukon will collect them and place them in hamster cages to sober up, where they can recover in peace and quiet.

This isn't the first case of avian intoxication, as similar situations have been well documented in scientific journals. In 2011 a small flock of blackbirds were found dead after having consumed too many fermented berries. And, again in 2011, German police had to remove a drunken owl from the side of the road. Although it wasn't injured, it was giving the general impression of being inebriated, apparently from drinking Schnapps – there were two empty bottles nearby. Police escorted the owl to a local bird expert who gave the poor bird plenty of water to help it sober up.

And it's not just birds who suffer the after-effects of over-ripe fruit. In Sweden, there was the case of an intoxicated moose getting well and truly stuck in a tree after eating too many fermented apples. The roaring moose had to be set free by sawing branches off the tree. The moose was consequently hung over, and took a couple of days to rest before heading back into the wild.

According to the experts there's not much that can be done to prevent birds or any other animal from over-indulging. They just need a day or so to rehydrate and sober up. Just like we do!