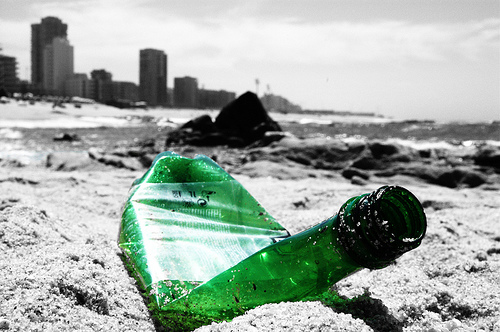 Marine biologists were horrified back in 2010 when they looked at the stomach contents of a stranded and deceased 37 foot grey whale –  towels, a pair of pants, 20 plastic bags, surgical gloves, a golf ball and duct tape.

On another occasion in 2014, a young sei whale, which is an endangered species, was found dead floating off Chesapeake Bay, a broken piece of a DVD case being the cause of its demise.

And two sperm whales were found just off the coast of California, their stomachs full of plastic, rope and fishing net. One of the whales had a ruptured stomach and the other had clearly starved to death.

The garbage in our oceans is having a deadly impact on many sea creatures, particularly whales and bottlenose dolphins, according to a recent study published in the Marine Pollution Bulletin Journal.

The ingestion of trash has been found in 56% of cetacean species, with rates as high as 31% in some populations. Ingesting plastic can often be the cause of an obstruction in the stomach or intestines, resulting in starvation and death.

Marine biologists are alarmed because the number of affected mammals seems to be on the rise, and only a few cases are documented. It is estimated that at least 35 bottlenose dolphins became stranded due to marine garbage between 2002 and 2013. Sperm whales are also paying the price in heavy numbers because they easily mistake debris for squid, which is their main food source.

A researcher from the University of Barcelona made a statement pleading for more control over the dumping of waste into the sea and to prohibit ships’ discharge into the sea.

"Plastic floats and is difficult to degrade," he said. "Eventually, all pollutants which are not destroyed on land arrive to the sea. The sea is not a rubbish bin.”

To help stop the amount of trash that ends up in our oceans and kills marine wildlife, the Environmental Protection Agency says reducing, reusing and recycling are the three key steps.