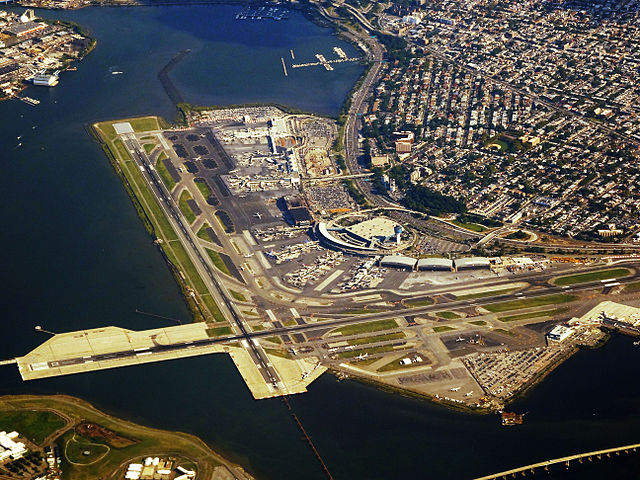 New York City’s LaGuardia Airport opened on this day in 1938.  Located in Queens County on New York’s Long Island, the airfield was originally named Glenn H. Curtiss Airport but it was re-named after Fiorello H. La Guardia, a former mayor of New York City who presided over the airport’s construction. It’s central location and proximity to the city center make LaGuardia a favorite hub for many travelers. LaGuardia is the smallest of the city’s three primary airports behind JFK and Newark’s Liberty International.

LaGuardia has a long and storied history. The airport site was first occupied by the Gala Amusement Park, a popular destination owned by the Steinway family. In 1929, the park was transformed into a 105-acre private flying field and first named Glenn H. Curtiss Airport after aviation pioneer Glenn H. Curtiss, and then re-named North Beach Airport.

In 1937, New York City took over the airport and enlarged the grounds with the purchase of adjoining land and by filling in 357 acres of waterfront along the east side. In 1939, it re-opened with a new name, New York Municipal Airport-LaGuardia Field. The airport was leased to the Port Authority in 1947.

LaGuardia Airport (LGA) has been operated by The Port Authority of New York and New Jersey under a lease with the City of New York since June 1, 1947. The airport is located in the Borough of Queens, New York City, bordering on Flushing Bay and Bowery Bay, eight miles from midtown Manhattan. It occupies 680 acres of land, hosting 72 aircraft gates.

Have you flown out of La Guardia? Share your experience below.