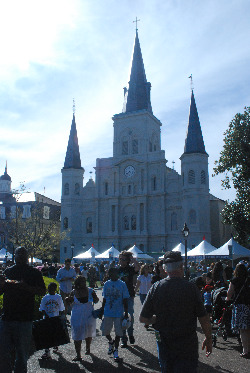 The city known as La Nouvelle-Orléans (New Orleans) came into being on May 7, 1718. Named for Philippe II, Duke of Orléans in France, the city’s port made it an ideal area for the French Mississippi Company under the leadership of Jean-Baptiste Le Moyne de Bienville. Under the terms of the 1763 Treaty of Paris, the city was turned over to Spain but then reverted again to France in 1801. Thomas Jefferson negotiated the purchase of the French colony along with a massive swath of land in the middle of the American continent in the Louisiana Purchase in 1803. Slave labor and fertile Mississippi farm land fueled the sugar and cotton industry in the area. A unique creole culture took root, giving the city a texture and flavor unlike any other city in the country. Even today, Louisiana’s court system is the only one in the United States largely based on Napoleonic principles rather than English Common Law. Let the good time continue to roll!