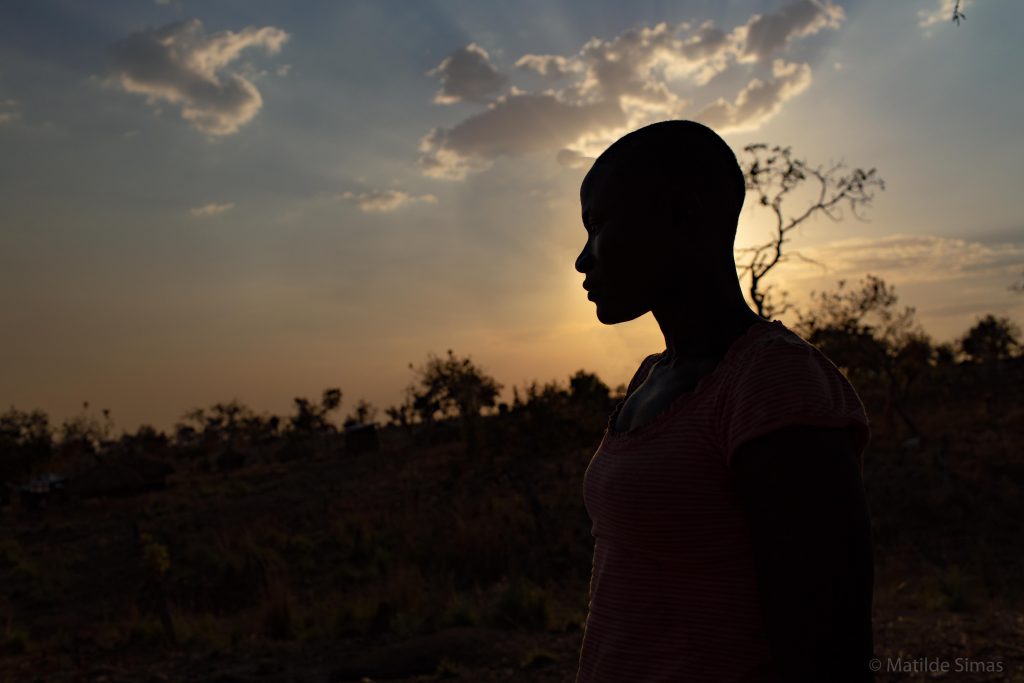 After an 18-hour plane ride and an overnight stay in Entebbe, she embarked on a 90-minute flight to Arua followed by a bumpy 90-minute drive to the settlement. During her time at the settlement, Matilde stayed in a tent with only the most basic of amenities—no flush toilets, bucket showers, and meals of mainly rice and beans. Life is not easy for the over 123,000 refugees who reside there, but it is safe from the immediate physical dangers of war.

“Before the war my childhood was filled with friendships and laughter. The war took that all away. Even my parents have been taken by war.”

It’s a civil war that’s been going on for nearly seven years, with no real end in sight. The war in South Sudan has resulted in perhaps as many as 383,000 deaths, and over four million people have been internally displaced or fled to neighboring countries. Children, unfortunately, are some of the most vulnerable victims of this war, exploited as child soldiers, forced into domestic servitude, and even taken as sex slaves. It’s a different type of trafficking, but trafficking nonetheless.

The result of a political struggle that ended with the removal of Riek Machar as vice president, South Sudan’s civil war broke out in 2013. Violence erupted between the two largest ethnic groups in the country and then quickly escalated, spreading into other states. With this violence came property destruction, looting, rape, and the recruitment of children as weapons of war.

Though exact figures are hard to come by, UNICEF estimates that over 19,000 children in South Sudan have been abducted into the armed forces to be used as soldiers, sentries, informants, spies, domestics, laborers, and sex slaves. Life isn’t easy for those who make it out. Most soldiers will tell you that war changes you—but for children trafficked into war, the horrors are simply unimaginable.

Healing in the most trying of circumstances

Photographers on humanitarian assignments aren’t just there to capture images, but to capture stories, too. For empaths like Matilde, the days spent talking with survivors about their stories can be hard. It’s a lot of emotional baggage to carry, and the responsibility of sharing the stories in ways that do them justice is immense.

During her time at Imvepi, Matilde spoke with several women who were trafficked into—and escaped from—South Sudan’s civil war.

“I cannot describe to you that time in my life,” Ann* shared with Matilde. “It’s too painful for me to go back there in my mind.” At the age of 15, she was abducted by a rebel group and trained as a soldier for three months under the threat of violence. She was repeatedly raped and witnessed countless people being killed. She has a child with a rebel soldier who took her as his ‘wife’ and was appointed as a sentry in the bush to patrol. When Ann saw an opportunity to escape, she took it. It was a difficult three weeks on foot, carrying her child, before she arrived at the Ugandan border—but it was worth it. “Now [at Imvepi], my life is secure. I want to put the past behind me.”

Sabrina*, who is 22, has lived at the settlement for two years. “The war has ruined me forever. I hear the screams. I am a broken person,” she says. A former cleaner for the Ministry of Defense, she was abducted by rebels while on her way to Uganda to seek safety. Under their control, she was trained as a soldier and forced to do things against her will. She escaped with the assistance of a relative in the rebel group. It took her two weeks to reach the Uganda border and another month and a half to reach the settlement.

Life at Imvepi is challenging for Sabrina. She walks up to three kilometers to get water or firewood—an unsafe journey that she feels puts her at risk to harm from men she may meet along the way. She is prescribed medication for anxiety and trauma, though it’s not always easy for her to get the medication. Sabrina also receives ongoing psychological social care but says that she still experiences pain when she thinks about her past.

The aid organization also runs a soap making empowerment workshop that Sabrina attends and she now aspires to one day have her own business that sells her home goods.

For photographers and journalists working in war-ravaged countries, the work can be emotionally difficult. The process of desensitization means that sometimes, unimaginable horrors like child soldiers and sexual slavery can start to seem almost normal. As Anderson Cooper recounted about his time in Rwanda, “It should be shocking … But you get to a place where you don’t have to ask that question, ‘Why?’ You can live in a world where there isn’t any why. It just is.”

For Matilde, that will never be the case. But as she converses with survivors while on assignment, she tries not to dwell on those horrors. “Part of moving past trauma is to envision a better future,” she shares. “Mostly we spoke about the struggles they face in their new lives and about their aspirations.”

Imvepi, and the women she met there, brought her hope. She spent days bearing witness to the hardships of their daily lives—simple things like collecting firewood, carrying water long distances, and cooking over a fire. But despite these hardships, the fact that they are able to access psychological services to help them work through the daily challenges of reintegrating into society provides hope.

And that hope is one of the things Matilde loves best about her work. Though the journeys may be long, arduous, and emotionally challenging, her assignments provide an incredible opportunity for learning, growth, and human connection. Being a humanitarian photographer isn’t for everyone, but Matilde wouldn’t change it for the world.

*Names have been changed to protect their identities Matilde Simas is a photographer from Boston, MA. Interested in the intersection of art, audience engagement and social change, Matilde leverages the power of visual storytelling to inform, provoke discussions, and inspire action. Her work on human trafficking has been widely exhibited by varies UN agencies. Beyond photography, Matilde is passionate about volunteering and traveling.  When she doesn’t have a camera in her hands, it’s probably because she’s planning her next journey.