Tonya Fitzpatrick inspires people to discover their purpose as a pathway to success, how to embrace the transformative power of travel and navigate the world as a global citizen. READ FULL BIO

Share
Tweet
Pin
Share
“Tonya is an engaging, charismatic speaker and a great storyteller. She takes you with her; as she easily interacts with her audience. That’s a gift!”

"Tonya is an amazing speaker, traveller, & example for world citizenship. She truly lives her story: Connecting people & service across the world. Her story exemplifies living a life of continual transition. There were amazing stories & asides, as Tonya kept the audience focused on their own potential development journeys."

“If I could express what Tonya is in one word it would be REGAL…Even before she presented I observed how Tonya was proficient and incredible in her craft.”

“Tonya did an amazing job of educating us on what it takes to launch, run and sustain a successful podcast…I walked away with an awareness of what it takes and tangible strategies on how to succeed.”

“Tonya showcases her depth of knowledge and passion for socially conscious travel. As a woman of color, she brings a unique perspective to her approach to travel, which is evident in all of her endeavors.”

Discovering Your Purpose Through Your Passion
Identify the stressors that may be holding you back from living a purpose-driven life.  Understand the steps it takes to discover your passion and learn why you may already know what it is.

Finding Truth in an Era of Fake News and Fearmongering
Break through the noise of sensationalized news reports that keep you from traveling, connecting with others or experiencing the wonderful surprises that the world has to offer.  Enjoy an opportunity to further develop the cultural intelligence that it takes to navigate the world in business and for personal fulfillment.

This motivational and thought-provoking talk is aimed at helping people who feel stuck or confused to help them identify their purpose and then map out a plan to move towards something they are passionate about.

In this talk Tonya shares WHY she left a stellar career in law and politics to become a multi award-winning travel journalist. By leaning into her WHY Tonya has seen incredible opportunities open up for her including an appointment as Delegate to the United Nations Commission on the Status of Women (63rd) and her acceptance into the prestigious Explorer’s Club.

Tonya shares the questions she asked and the steps she took to uncover her WHY. She also provides tips to help others get unstuck.

Career Transitions – Detour Ahead:  How to Navigate a Career Change
Learn why the role of networking in advancing social capital, the importance of strong communication skills in articulating personal brand essence, and the importance of the fundamental principles of education.  Be prepared to elevate yourself and initiate steps toward living the life of your dreams! 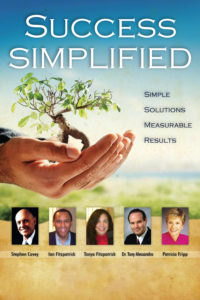 Ever wonder why you feel like you’re on a treadmill, trying to go faster and juggling many different tasks while trying to please everyone?  You’re not alone!  These days it seems that everyone is trying to grab the gold ring but the carousel is going too fast and it’s too complicated to find competent strategies to reach out and actually grasp it.

What if you took command and chose your own meaning of success so that you could love the life you live?  The insights shared by the authors in this book have the capacity to not only inspire but transform your life.

As a former expat, Delegate to the United Nations Commission on the Status of Women and Explorers club member, Tonya effectively conveys the transformative power of travel and its effect on personal and professional growth, cultural understanding, and confidence. She has spoken for three TEDx events, The National Association of Women MBAs, as well international events, universities and travel industry organizations.

Tonya graduated from the London School of Economics and is a former White House appointee to the post of Deputy Assistant Secretary for Civil Rights Policy at the U.S. Department of Education. She has been featured in MSNBC, U.S. News and World Reports, Black Enterprise and several books. Tonya has also appeared on the Washington, DC affiliate CBS and NBC stations, Retirement Living channel, several top national radio shows, and podcasts.

Through World Footprints, Tonya has shared inspiring interviews that support a truth about the transformative power of travel. Guests have included prominent figures like the late Dr. Maya Angelou, Ken Burns, David Rockefeller, Jr., Robert Kennedy, Jr., and others.

If you want to start blazing your own trail with increased effectiveness in the global marketplace. Let Tonya Fitzpatrick show you the way!