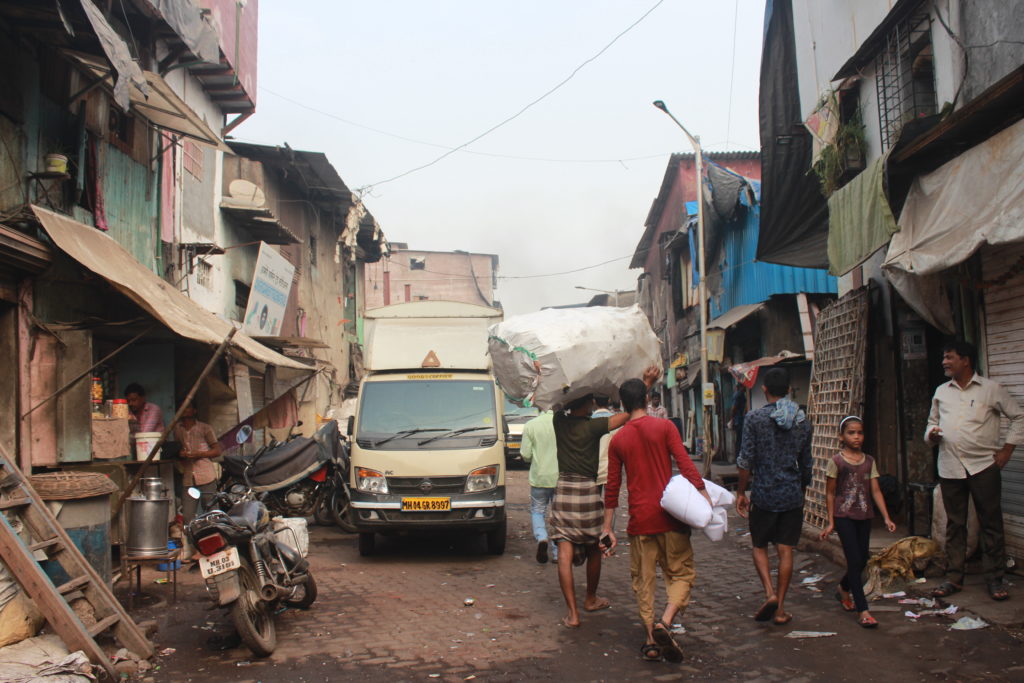 Dharavi, in central Mumbai, is considered one of the largest slums in Asia, but deep within this neighborhood, below the shanty grey roofs, loosely comprised of scavenged, upcycled metal, lives a resourceful and innovative community that plays an imperative role in Mumbai’s city-wide waste management.

I learned about this innovative community and its sustainable economies through a local organization that runs tours, Be The Local Tours. The group brings tourists to Dharavi to help challenge the stigma surrounding life in the slums.

“Dharavi is the land of opportunity,” says Fahim Vora founder of Be The Local Tours. Fahim is third generation Dharavian, proud of his heritage and the innovativeness of his people. “If Dharavi wouldn’t be here, there would be a landfill the size of two square kilometers in its place.”

An Economy Based on Waste

The waste of roughly 23 million people, an estimated 30 percent of Mumbai’s waste, finds it’s way to Dharavi’s 2.1 square kilometers through private means—individual ragpickers who scour the streets for waste and hospitality and manufacturing industries looking to get rid of their garbage.

Over the years, Dharavi dwellers have created an industrial economy in Mumbai, creating employment opportunities for the recycling of Mumbai’s waste, an undertaking that arguably should be addressed by local councils.

The private companies and rag pickers deliver plastic, cardboard, aluminum, metal and more, to different compounds, essentially small recycling plants inside Dharavi, where the resources are transformed into reusable materials for sale, providing income to many of the one million people that live in these slums.

Be The Local Tours trains young adults, who have grown up in Dharavi, as tour guides, so they can earn income to fund their college education while highlighting their neighborhood’s positive aspects.

“We hire students to run the tours and they use that money to fund their university. Seven students have since completed Bachelor’s Degrees and one has completed their MBA,” Fahim says.

As we walk through the narrow alleys with Fahim, we witness a world of innovation. In one room, three men sit, sorting through bags of various plastics including old computer parts and videocassettes (something I hadn’t seen in years.) A screeching sound comes from the next room as a crushing machine processes large pieces of plastic. The end result— small pieces of microplastics that will be sent off to be melted down and recreated into something new.

The industrial area of Dharavi has compounds for various industries. As we turn the corner, we enter the wood zone. Muslim men sit carving Hindu shrines out of upcycled wood. This neighborhood is multi-religious and multi-ethnic and differences are not much of an issue in this tight-knit community where everyone’s first instinct is for survival. The next corner unveils Dharavi’s thriving leather industry, with an estimated annual turnover of $1.5 million U.S. dollars. There are industries in aluminum, textiles, cardboard and more.

It’s a surprising sight to witness so much economy here in these slums, an area stereotypically considered impoverished and unfortunate. Fahim explained to us the progress that has occurred here. “In the last ten years, a lot of support has come to Dharavi in the areas of medical, health and education. It’s now easy for people to access adequate health care and sanitation.”

There are over 2,500 slums in Mumbai and over 40 percent of the city’s population resides in them. To many people, slums are the sites of extreme poverty and chaos. Dharavi, in particular, was depicted in the award-winning 2008 movie Slumdog Millionaire. However, slum dwellers now make up a significant percentage of India’s middle class. Their plight is the result of problems resulting from poor urban planning.

Approximately five-hundred new families move to Mumbai every day, most of whom are absorbed into the city’s slums simply because there is nowhere else to go. Photographer Peter Bialobrzeski explores Mumbai’s “Urban Crisis” in a recent photographic series dedicated to “opening up the conversations about city management and planning in Mumbai.”

While the solution to tackle Mumbai’s excessive population growth is not linear, visitors can learn that there is much more to Mumbai’s slums than meets the eye. I joined the Dharavi tour expecting to be saddened and shocked, but instead, I left feeling inspired and hopeful for this resourceful community that has a lot to teach us about driving sustainable economies in our own worlds.

Be The Local Tours offer daily tours to Dharavi. They have a strict ‘No Photography’ policy and the tours are welcomed by the local community.

Here’s another walking tour you might be interested in: Why the Camino de Santiago is Not Just a Religious Journey