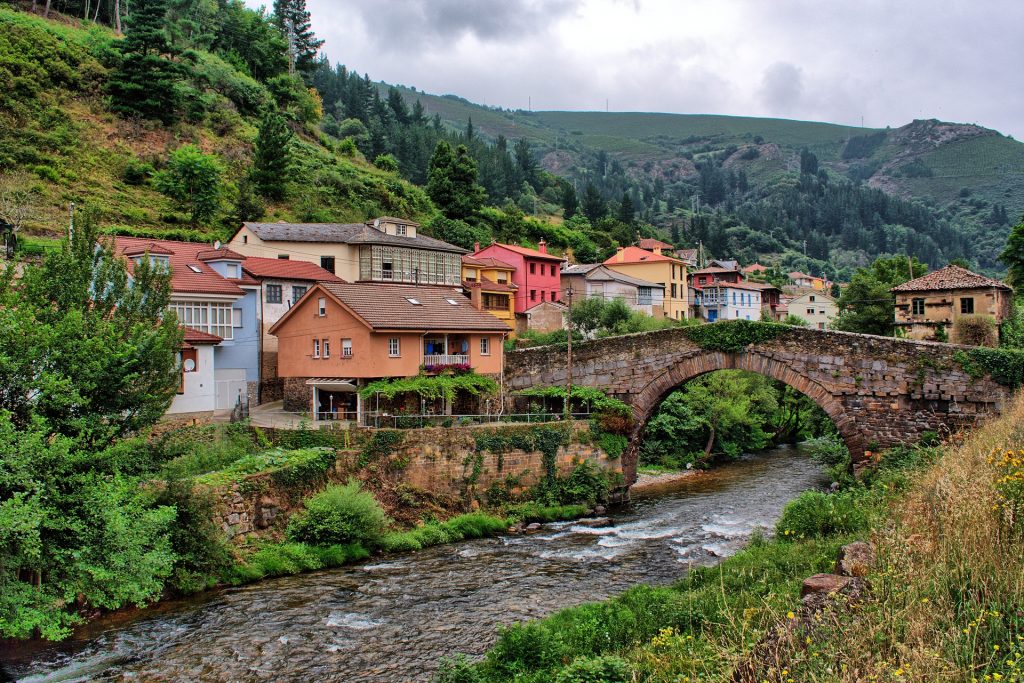 Where can you wake up in the morning to the pitter-patter of raindrops falling onto the lush, green mountainside while the bagpipes play in the distance? Scotland seems the obvious answer, but if you trade the kilts and haggis for jamón (ham) and bulls, you might be surprised to find the same scene in Asturias, Spain. The northern territories of Spain are often forgotten as part of the original Celtic nations and still retain a part of the culture.

The sunny Mediterranean beaches of Southern and Eastern Spain will always be a huge draw for travelers. It’s hard to top a walk through the bustling streets and archeological gems of Barcelona or a peaceful day on the beaches in Malaga.

Devoutly Spanish Throughout the Centuries

The moors occupied and controlled Spain for 700 years before the “Reconquering” (Reconquista). However, anyone from Asturias will proudly tell you that the Moors never managed to take over their home. In fact, Asturias was the first Christain kingdom established in the Iberian Peninsula. Since it spent the years between 700-900 AD as its own isolated kingdom, Asturias is full of examples of pre-Romanesque architecture not found in other parts of Spain.

This little stronghold nestled between mountains and the ocean is responsible for the creation of modern Spain. This feeling of being the true, real Spain along with their refusal to surrender is a large part of their culture.

The gastronomy in Asturias has been shaped by its immediate geography and stands out from the rest of Spain. Its numerous cold mountain caves make it an ideal place for cellars. Large tunnels carved into the rocks are filled with hundreds of wooden barrels of cider and wheels of strong, pungent cheese.

While the rest of the nation is arguing about whether wine or beer pairs best with their tapas, Asturias is focused on something a bit sourer. International cider enthusiasts may be surprised when they take their first sip of cloudy sidra since the Asturian version doesn’t have a touch of sweetness to it.

Go to a proper sidrería (cider house) and watch as they pour your cider into your glass in the famous el escanciado style. The server holds the large cider bottle over their head in one hand with the glass in their other. The cider is poured in one long vertical line, hitting the glass directly below the rim, creating small bubbles as it aerates. The cider is bottled naturally, causing low carbonation levels that won’t be noticeable if not poured in the traditional fashion. It’s an added bonus that it’s so entertaining to witness!

Dairy lovers will be right at home in Asturias, known in Spain as “the land of cheese”. Famous for their cabrales, a type of blue cheese, you know you are in an Asturian bar when you can smell it a few doors down.

Hundreds of thousands of people travel from around the globe annually to walk the famous Camino de Santiago. Legend has it that the body of the apostle Saint James was found in a field in northern Spain, hundreds of years after his death. The King of Asturias needed to see this for himself and commenced the first pilgrimage.

Known in English as The Way of St James, this pilgrimage has many distinct paths and starting points. Some hike from France, many more from within Spain, and others from Portugal. All paths end at the Tomb of Saint James, which is located by the monumental cathedral in Santiago de Compostela, Galicia, Spain.

The Camino Primativo, or the Old Way, starts in the capital of Asturias, Oviedo. This is the original and oldest path, first trekked by devoted pilgrims and King Alfonso II himself, in the ninth century. One thousand years later, the devoutly religious and the modern adventurers alike still walk the 370 km together.

Beginning in one of the most religiously important churches in Spain, the Cathedral of San Salvador in Oviedo, this path is usually less crowded due to its high-intensity incline. If you can handle its vertical nature, this path curves through medieval towns, castles, Roman aqueducts, monasteries, welcoming villages, and the stunning mountain landscapes.

If you need an escape from the modern world, consider taking the time for yourself to embark on this multi-day hike. You will be sleeping in no-frills hostels, sharing showers, and pushing your body to its limits but you will come out on the other side with a newfound respect for the people who made this country what it is today.

However, if you can’t dedicate that much time, Asturias is known for some of Europe’s best day hikes as well. The alpine Lakes of Covadonga are emerald green and are surrounded by easy hikes. There’s no shortage of untouched nature and rugged mountain landscapes here.

It’s easy to get used to walking the same steps as medieval kings and Roman leaders in Europe, but Northern Spain and Southwestern France contain reminders of our most distant ancestors. Asturias is home to some of the most anthropologically important prehistoric cave paintings, some painted by Neanderthals as far back as the year 35,000 BC.

These paintings show the first evidence of humanity’s desire for religious expression and art. Standing before them brings you back to our most ancient roots. Many of these caves are so fragile that visitors are either banned or limited.

Discovered by accident in 1968, the Tito Bustillo Caves in Eastern Asturias are still available for guided tours and contain amazingly preserved paintings of horses and reindeers ranging from the years 22,000 to 10,000 BC. Tickets are limited to maintain the cave’s integrity, so it is important to plan your visit ahead of time.

With its cragged coastlines, historic pilgrimage, hiking through the magnificent Picos de Europea, unique gastronomy, and unwavering spirit and culture of its people, Asturias should be on your adventure bucket-list.