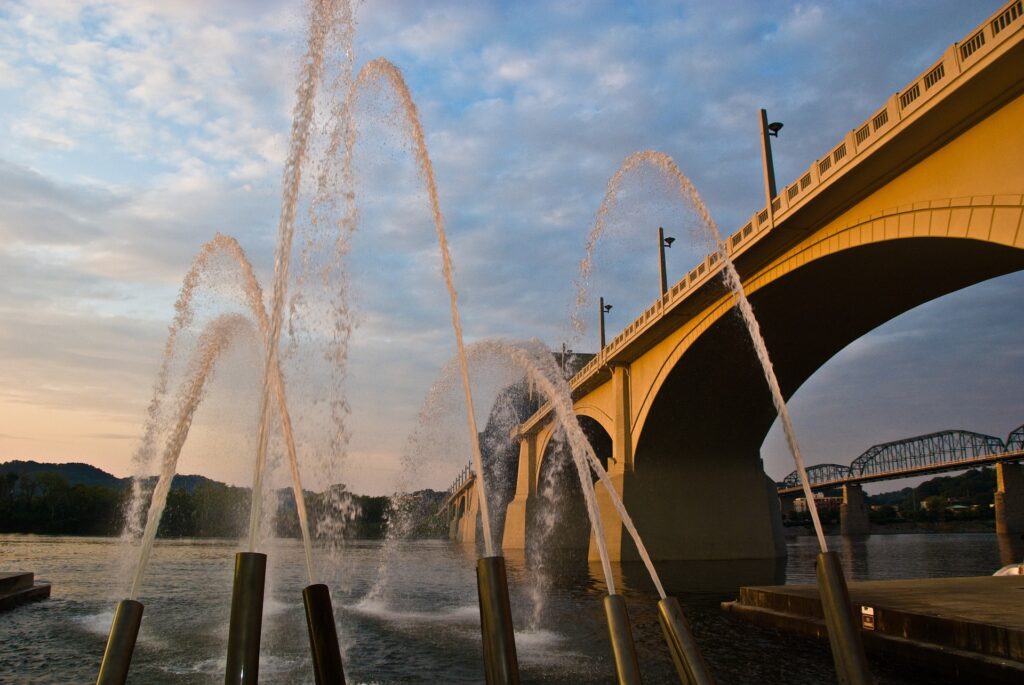 Situated in the valley below three surrounding mountains, Lookout, Raccoon and Signal, Chattanooga’s natural beauty speaks for itself. The Tennessee River winds through the city center turning at Moccasin Bend, adding to its natural beauty. You might say this Tennessee city sparkles, but it wasn’t always this way.

In an evening broadcast of his nightly news program in October 1969, Walter Cronkite announced to the country that Chattanooga was the “Dirtiest City in America.” Burdened with empty factories, a deteriorating downtown and the scars of pollution brought on by decades of industrial activity at the city’s center, the unfortunate moniker assigned by Cronkite became a catalyst for change.

Leadership from the private, nonprofit and public sectors joined forces to rebuild downtown and reconnect the city to its historic riverfront where Chief John Ross of the Cherokee Tribe established a trading post in 1815, which led to Chattanooga’s founding. The landing also served as the launching point for the tragic 1838 forced removal of Native Americans known as “Trail of Tears.” Today, it serves as a performance venue and the main stage for Tennessee River events from live music to regattas. But history isn’t forgotten here, it’s memorialized.

Water runs over the steps at The Passage on Chattanooga’s downtown riverfront. The “weeping” staircase pays homage to the Cherokee who lost their lives along the Trail of Tears as they were removed from their native lands. Circles along the sides of the steps depict scenes telling the story of the seven clans of the Cherokee Nation in the Southeast. The Passage offers a place to learn about and pay respect to the Cherokee culture and history.

One of the Civil War’s bloodiest battles—the Battle Above the Clouds—took place above the city on Lookout Mountain. Today, Point Park contains a ten-acre memorial park that overlooks the Lookout Mountain Battlefield and the city of Chattanooga. A paved walkway around the park winds past historic tablets, monuments and Confederate artillery positions. One of the largest monuments, the New York Peace Memorial erected by the State of New York, serves as a tribute to peace and reconciliation between Union and Confederate veterans after the Civil War.

Street art is popping up everywhere with murals depicting the history of the area. The largest—the M. L. King Jr. Mural—wraps around the AT&T building downtown. At 42,179 feet, it’s the largest mural in the Southeastern U.S. and one of the top five largest in the nation. Headed by Meg Saligman Studios and completed with the help of a dozen mural artists including Chattanooga locals, the mural offers a visual depiction of the past, present and future vision for Chattanooga as it pays tribute to the rich culture of the African American community long anchored on M.L. King Boulevard.

Before Chattanooga’s Riverfront revival where the Tennessee Aquarium, Discovery Children’s Museum and a host of other attractions bring visitors to the water’s edge, the classic Chattanooga attractions were perched on Lookout Mountain.

If you’ve ever road tripped to or from this part of the country, you’ve likely seen the “See Rock City” signs painted on the rooftops of country barns. Comprised of natural rock formations and beautifully designed gardens, Rock City opened in 1932. Its owners Garnet and Frieda Carter enlisted the help of sign painter, Clark Byers in 1935 to paint “See Rock City” barn advertisements throughout the Southeast and Midwest United States. By 1969, Byers had painted over 900 barn roofs and walls sharing those three famous words, See Rock City.

My History Lives Here Too

I was born just across the Georgia-Tennessee state line in a Fort Oglethorpe, Georgia hospital. Our home was in Chattanooga. With a father from Georgia and a mother from Tennessee, I claim a divided origin with Georgia as my birth state and Tennessee as my home state.

As my first hometown, Chattanooga contains much of my history. Riding around with my parents always brings stories from my earliest years. Although we moved away in my childhood, we returned home, and I ultimately graduated from high school here—the place where my school days began.

Having lived in numerous states throughout my life, I now call New York City home—a far cry from my Southern roots. But my Chattanooga experiences serve as the foundation of the person I am today. Of course, I continue to evolve and so does Chattanooga. I’m glad we have that in common.

1 thought on “Chattanooga: A Story of History and Evolution”