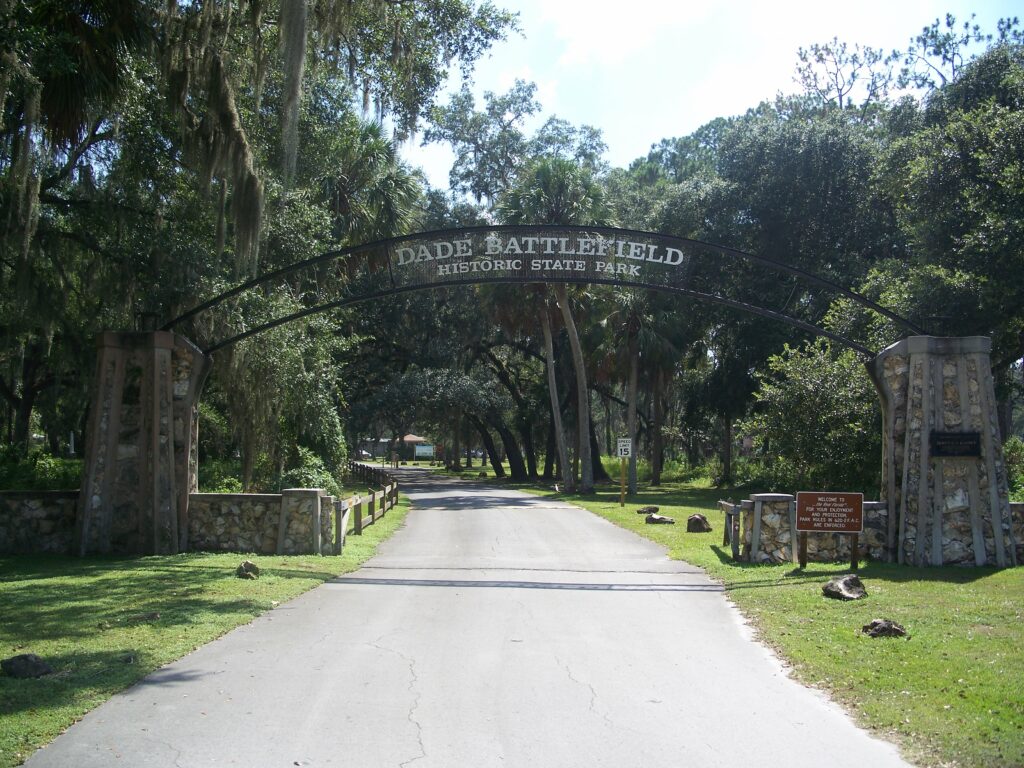 Dade Battlefield is a small state park in Bushnell, Florida that tells a big story of one of America’s most forgotten wars. The Second Seminole War is a story of a people fighting to save their homeland from invasion. It’s sad that the invader was the United States.

The Florida Seminoles are one of the newer Native American tribes. They began as Creeks pushed out of Georgia as white settlers flowed into their ancestral lands. These Creeks merged with other tribal remnants, including the Yuchis, Yamasses, and a few older tribes that were decimated by the European arrival. The Seminoles also accepted runaway slaves and free Blacks into their tribe.

By the 1770s, these Indians began calling themselves Seminole, meaning “wild people” or “runaways.” Conflict was destined.

The Dade Battlefield park and museum tell the story on the spot where it happened. Each year, the weekend after Christmas, there is a reenactment of the battle.

The museum exhibits begin earlier than the battle that occurred here. Many people do not realize that the Seminole Wars — there were three — had underlying factors, one of which was slavery. Of course, the major purpose was an American territory grab. Exhibits explain that in the First Seminole War, 1817-1818, Andrew Jackson invaded Spanish-owned Florida, which finally resulted in Spain ceding Florida to the United States. That war began when slave trackers invaded the Seminole reservation and captured Black Seminoles and returned them to slavery.

The museum plays a short video that tells the story of the battle that began the Second Seminole War. The Treaty of Moultrie Creek gave the Seminoles this land in the central portion of Florida’s peninsula. White settlers and slave hunters continually violated this treaty, with the settlers claiming homesteads within Seminole territory and the slave hunters continuing to capture Black Seminoles. Jackson wanted to send the Seminoles to Oklahoma and negotiated treaties with some Seminole Chiefs. Most of the chiefs would not accept the treaty. Jackson began sending troops into the area. Major Francis L. Dade led a troop of 107 men along Fort King Trail from Fort Brooks in Tampa to reinforce the fort at Fort King, present-day Ocala. They were armed with their normal hand weapons and had one cannon with them.

On December 28, 1835, Chief Micanopy led the Seminole warriors. They ambushed Dade’s troops and killed all but three of the men. The Seminoles had only three killed and five wounded. Enraged Americans called it The Dade Massacre. It was the start of the Second Seminole War.

Just across from the museum, there is a replica of the breastworks Dade’s men constructed during the battle. Monuments placed around the park mark locations of the officers’ deaths. The park comprises 40 acres of mostly pine flatwoods and a live oak hammock. There is a giant oak tree that was already a large tree at the time of the battle. All around there are palmetto bushes that provided shelter for the Seminoles and allowed them to follow and watch Dade’s troops unobserved. A nature trail winds through the pine flatwoods area. There is a tennis court, two shuffleboard courts, six picnic shelters, some with barbecue pits, and restrooms at the museum and in the picnic area of the park.

In the picnic area, the Cannon Shelter has a model on display of the cannon used by Dade’s men. During the battle, firing the cannon gave the soldiers time to cut trees to construct makeshift breastworks like the replica you see near the museum.

There is an 1816 bayonet for a .69 smoothbore flintlock musket in the museum. It was found in the nearby Wahoo Swamp and may have been in the Dade Battle. The museum continues the story of the Seminoles to the present day with crafts and native dress displayed. One exhibit tells of a ball game similar to Lacrosse, still played by Seminoles.

There is a Seminole Flag displayed with their Pledge of Allegiance posted. Their pledge of allegiance is similar to the United States’ pledge: “I pledge allegiance to the flag of the Seminole Tribe of Florida: and to the Sovereign nation for whose heritage it stands. With the help of the Great Spirit, I promise to walk tall and strong, straight and honest under this banner. May I always defend her honor with courage, and display her colors with great pride.”

The park and museum are small, but the history that lies buried here is huge. The Second Seminole War lasted seven years and was America’s longest Indian war. It took the lives of about 1,500 US soldiers, about 50 naval sailors, and hundreds of volunteers and militia, and cost around $30 million, even though then the annual federal budget was only about $25 million. Over 3,800 Seminoles were forced from their homes and sent to Oklahoma. Even after the short Third Seminole War, the Seminoles never surrendered. The few hundred that remained in Florida retreated to the Everglades, where they remain a sovereign tribe today. The park is open daily from 8 a.m. until sunset. Museum hours are 9 a.m. to 5 p.m.