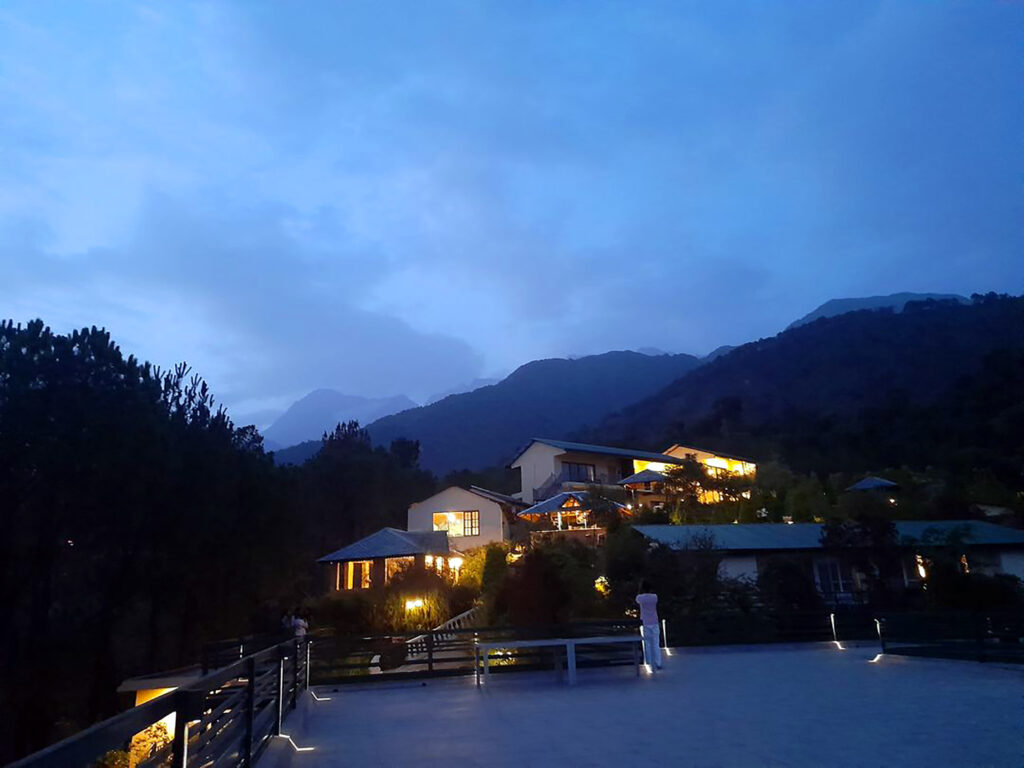 A mountainous land in the Northwestern part of India, the state of Himachal Pradesh has long been a paradise for travelers. Colonial-era hill stations, idyllic rural settlements and verdant valleys dot the expanse of this North Indian state that was once a part of undivided Punjab. However, Kangra Valley, in the south-eastern fringes of Himachal, has always remained a bit off the tourist radar. But this has been a boon in disguise. The lush green valley in the shadows of the mighty Dhauladhar Range has retained its pristine charm seldom found in destinations thronged by tourists.

Perched on a hilltop on the outskirts of Palampur town, Rakkh Resort is a perfect base to explore the myriad splendor of Kangra Valley, while experiencing the authentic flavours of Himachali tradition and culture.

The cottages of the 6-acre property are spread out on the entire slope of a hill such that they meld into the landscape, hemmed by the serried mounds of the Shivalik Range with the snowcapped Dhauladhar towering behind them.

With its ethos entrenched in responsible tourism, Rakkh Resort undertakes sustainable practices that includes use of recycled plastic and refillable dispensers, sourcing hyperseasonal produce from local growers and employing members of local community to run the retreat.

Swati Makkar, General Manager of Rakkh, says, “Connecting with friends, family and oneself is the core theme we go by, especially in a digital-driven world, which is increasingly reliant on technology.” The activities and experiences are curated so as to promote family bonding and making new connections through nature hikes, village excursions and picnics by a gurgling stream. A number of DIY stations dot the property where kids have a fun time rustling up bowls of maggi, while you can hone your BBQ making skills.

We especially enjoyed the gentle downhill walk to the village of gaddis – the shepherding tribe who spend time in the higher Himalayas with their flock of sheep. Traditional mud houses with expansive courtyards are slowly being replaced by modern structures, but the couple of watermills that are still in use feel like a time capsule.

A trip to the Himalayan Brew Tea Estate and its factory can be a wonderful way to learn about the tea culture in Himachal. We found the flavor profiles of the orthodox Kangra variants surprisingly different from Darjeeling Tea, with fresh floral notes and vegetal twists, available at a very reasonable price point.

A short narrow gauge train journey along the picturesque sub-Himalayan foothills is the perfect way to immerse into the inner recesses of the Kangra Valley. Operating since 1928, the Kangra Valley Railway was an imperial project to tap the natural resources of Kullu and Kangra valleys. The 40-km. ride from the small station of Chamunda to Guler is a a particularly scenic part of the 165-km stretch that can be an easy half-day excursion from Rakkh Resort.

Ringed with an alpine forest, the road from Palampur winds down to Gyato monastery, 12 kims from Rakkh Resort. The majestic Dhauladhar forms a stunning backdrop to the gold-and-rust façade of the monastery, belonging to the Tibetan order of Buddhism. When we arrived, the snow peaks were hidden behind a band of fluffy clouds. But the young monks in crimson robes running about in the expansive courtyard, Buddhist chants reverberating through the prayer hall where the shimmering silk thangkas shone brighter in the semi-darkness and the beautiful statue of Maitreya Buddha made it one of the highlights of the trip.

A 1.5-hour drive away from Rakkh is Bir Billing, one of the best paragliding spots in the world that had hosted the first ever Paragliding World Cup in 2015. With the climate perfectly suited for any airborne gliding sport, smooth winds for clean take offs and ideal landing sites, embark on your flight of fantasy on the nylon canopy and sail through the crisp mountain either on a pilot-operated tandem or as a solo paraglider. On the way back, you can make a pitstop at Baijnath Temple, one of the twelve Jyotirlingas worshipped continuously since its construction in the early 13th century.

In lockstep with its go-local ethos, Rakkh Resort focuses on promoting traditional Kangra cuisine. We sampled  dhaam, a celebratory course-based meal of locally-grown rice, variety of pulses and vegetable curries for our dinner, topped up with delectable khatta mutton (slow-cooked meat in a thick, tangy gravy) and dollops of creamy, decadent kheer.

A plethora of immersive, interactive activities such as pottery, weaving, archery, game of darts and soft adventures likewall climbing have been curated at Rakkh Resort, which is one of the pioneering resorts in the country to feature in-house sky-cycling where you can pedal on an iron rope, fixed high on the air and glide from one ridge to another with the cool mountain breeze blowing around you. And If you are not such a adventure-seeking soul looking for an adrenaline rush, there is always the option of lazing on the outdoor terrace or the infinity pool and wonder at the interplay of light and shadows over the mountains, and clouds scudding across the sky, creating myriad patterns on the emerald valley below.