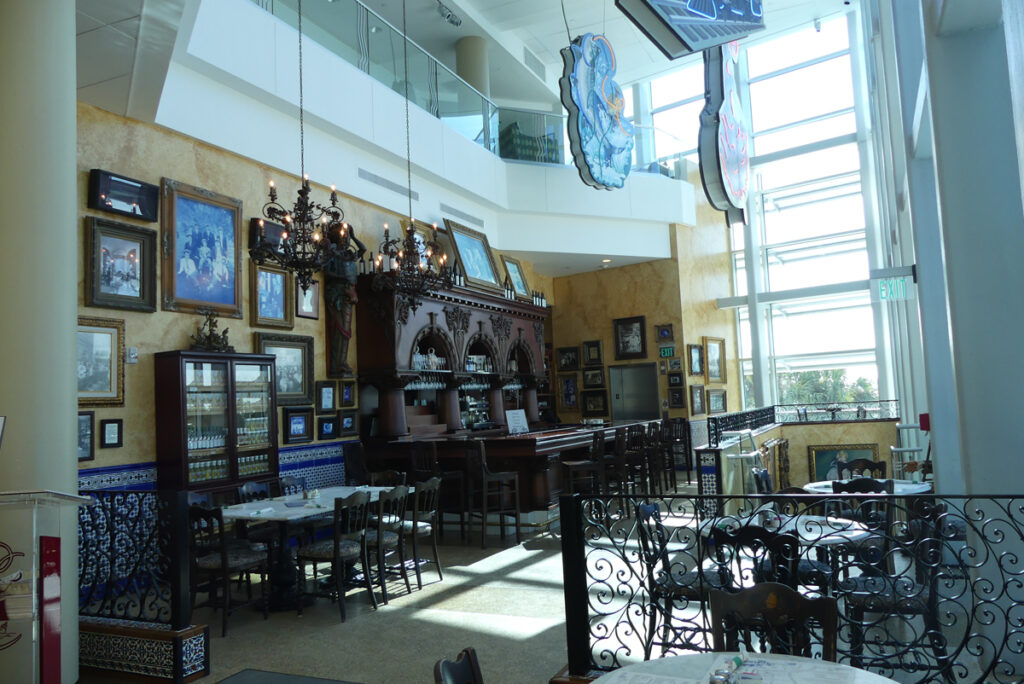 Don Vicente Martinez Ybor, a Spaniard, came to Florida from Cuba. He first set up his cigar-making factory in Key West but found his mostly Cuban workers often left to return home. He moved to Florida’s western coast on Tampa Bay and built his own town and cigar manufacturing empire. He invited other cigar manufacturers to join him and together they became the cigar capital of the world.

Spanish, Italian, Sicilian, German, Romanian Jews, and other immigrants joined the Cuban settlers. Each brought their native ways and food to form a special blend of culture found only in Ybor City, creating a city within a city. Ybor City is one of only three National Historic Landmark Districts in Florida.

Although technically a part of Tampa now, it keeps many of its old ways. Where else do you find feral chickens roaming the streets? They are the descendants of chickens once kept in the backyards of many immigrant families.

Centennial Park is a good place to begin a visit to Ybor City. It’s a 2.5-acre park that houses a fountain, Ybor Art Studio, and many of Ybor City’s free-roaming feral chickens. Around the plaza, there are statues of people who helped make Ybor City what it is today. A Tribute to Immigrants of Ybor City was dedicated in 1992, showing a father and mother with a young boy and girl. The founding father, Don Ybor, has a statue a few blocks away on 7th street.

Just behind Centennial Park, Ybor City Museum State Park tells the story of Ybor City. The museum is housed in the old La Joven Francesca bakery, where Cuban bread began. Francisco Ferlita, a Cuban-Spanish-Italian immigrant, opened the bakery in 1896 and baked those long skinny loaves of Cuban bread in this bakery until the 1960s. A bonus is that the museum garden and Centennial Park have free Wi-Fi. The Museum Garden has tables near their sparkling fountain where you can relax and catch up on email and other computer needs.

Centennial Park is stop number one for the TECO, Tampa’s historic streetcar. Tampa’s first electric streetcars began in 1892. Factory workers could hop aboard and go to a park or picnic area for a few cents. Today the streetcars take you from Ybor City into Channelside and Downtown Tampa for free. Do ride the TECO Streetcar into Channelside and visit the Tampa Bay History Center. Although not in Ybor City, the center has a lot of information about the early years of the city and there is a replica of Columbia Restaurant’s original bar in the center lobby.

Ybor City’s clubs have a different meaning than a nightclub or a fitness club, though they function in those ways to some extent. For the many other immigrants who came for the plentiful and well-paying jobs, daily work required that they mingle daily with other nationalities, but on their off time, they each had their own clubs. Membership was about a quarter a week. This provided them with not only a place to dance, gamble, socialize, and enjoy their own cultural style entertainment, but they had a doctor and educational facilities at the clubs. In 1904, the Spanish Club built their own hospital, the Sanatorio del Centro Españo. Many of the club buildings are still standing today, including the Spanish Club, the Cuban Club, Italian Club, and the German Club.

Since this was the South in the days of Jim Crow, racial inequality was still a factor, although less here than in most southern cities. The Cuban Club was technically for the white Cubans. There was another club for the Black Cubans, La Unión Martí-Maceo. Since many members of the same family in Cuba had differing shades of skin, this was difficult. Unofficially, Black Cubans would visit the Cuban Club and were accepted just like any other Cubans. La Unión Martí-Maceo building was demolished but the organization is still active.

An interesting tradition the Cuban cigar workers brought with them from Cuba was that of el lector: the reader. Because rolling cigars was a mind-numbing process, these readers would sit on an elevated platform in the cigar factory and read to the workers, reciting everything from novels to political newspapers.

Another interesting part of Ybor City is the food culture, which recognizes the many nationalities who came here. They believe the Cuban Sandwich was invented by Columbia Restaurant founder, Casimiro Hernandez, Sr. Hernandez opened it as a small corner restaurant and saloon in 1905. Along with hard liqueur, he served mainly Cuban coffee and sandwiches to the cigar workers. Each part of the sandwich represented a different nationality. The ham came from Spanish tradition; the Sicilians brought salami; the Cubans contributed the roast pork loin; the Germans and Jews added the Swiss cheese, pickle and mustard.

Today, Columbia Restaurant is still owned and operated by Hernandez’s descendants. It is the oldest restaurant in Florida and the largest Spanish restaurant in the world. They are famous not only for the Cuban Sandwich and their traditional 1905 Salad, but several other traditional Ybor City dishes. One popular dish is “Croqueta de jaiba,” Ybor City Devil Crab Croquettes that became popular during a strike in the late-1920s. The workers were looking for cheap dining alternatives. They easily caught blue crabs in Tampa Bay and Cuban bread was cheap. Housewives cooked this at home and street vendors sold them from carts. The dish consists of blue crab meat mixed with a special enchilada mix, a tomato-based Cuban/Italian spice called “chilau.” Cover the mixture with crumbs of stale bread and the soft section of Cuban bread, then dredge it in a mixture of stale Cuban bread crumbs or Cuban cracker meal. Deep-fry it and you have a delicious treat. Round off your meal with a Guava Turnover “Carmita.” It was a popular dish of Carmen Hernandez, Casimiro Jr.’s wife, who often made it at home for the family’s Sunday dinner.

Round off your day in Ybor City with the Official Ybor City Ghost Tour, an experience that blends the paranormal and authentic history. Your guide will take you into some of the most haunted buildings in the country. The Travel Channel named the Cuban Club as one of the Top 10 Most Haunted Places in America.

With such a unique history, this “city within a city” is an amazing place to visit.