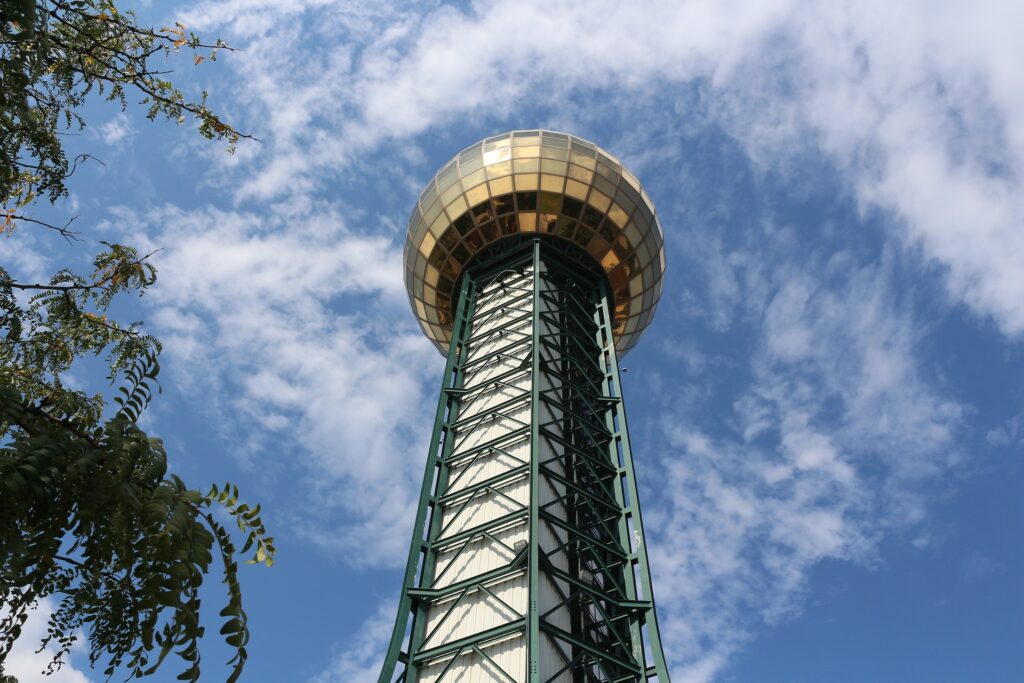 Driving east on I-40 toward the Great Smoky Mountains, a huge golden ball known as the Sunsphere guides you into downtown Knoxville, Tennessee. Just as the Eiffel Tower in Paris was erected in 1889 and the Seattle Space Needle in 1962 as the respective cities hosted the World’s Fair, the Sunsphere joined such iconic landmarks for the 1982 World’s Fair, officially known as the Knoxville International Energy Exposition.

In 1980, a Wall Street News journalist dubbed Knoxville “a scruffy little city” after questioning, why Knoxville? As it turned out, 11,127,780 attendees didn’t find Knoxville so scruffy after all, making the exposition the 5th best attended in U.S. history among those sanctioned by the BIE.

Standing 26-stories tall, each pane of glass in the 5-story globe portion of the theme structure is made of 24-karat gold and marks the spot at Fair Park where live music, festivals, and other main events take place just blocks from the town’s center. Boasting 360 degrees panoramic views of the city, the sphere’s 4th-floor observation deck is open for tours by reservation for $5 per adult and free for kids 12 and under.

The city recently celebrated the exposition’s 40th anniversary with a renowned event:

The “Expo” was a series of three ticketed events held over the course of the day that are part of the kick-off events for Knoxville’s and Knox County’s 40th anniversary celebration of the 1982 World’s Fair. The East Tennessee Historical Society (ETHS) is also hosting a new feature exhibit, “You Should’ve Been There!”: The 40th Anniversary of the 1982 World’s Fair, in the Museum of East Tennessee History, which will be on view through October 9, 2022.

At the 1982 World’s Fair, 22 countries gathered in Knoxville to explore the theme “Energy Turns the World.” Many different pieces of memorabilia came out of this event, but one of the most famous was the “World’s Fair Beer.” The East Tennessee Historical Society has partnered with Knox Brew Hub, Knoxville Area Brewers Association, and more than 20 local Knoxville breweries that are working to create a beer inspired by a country represented at the 1982 World’s Fair. With the help of multiple embassies, ETHS has linked our Knoxville-based brewers with foreign breweries to discuss the culture of brewing in Mexico, the Netherlands, Germany, and more.

Along with this event, there are plenty of other ways to savor the “Scruffy City.” Within the downtown district alone, there are well over 90 restaurants and bars with some of the best listed in my roundup over on Eater Nashville. Still, on a recent trip to Knoxville, I fell in love with a handful of favorites you should add to the list:

Within the heart of the University of Tennessee’s campus, the strip (Cumberland Avenue) has long been a favorite late-night haunt for college students and alumni alike. Now, one of the university’s most famous alumni, Peyton Manning, has staked his claim at The Graduate Hotel Knoxville with Saloon 16, the four-star hotel’s anchor restaurant. Along with a western saloon motif, the interior is decked out in Manning memorabilia and other UT artifacts. Feed the jukebox, belly up to the bar, and devour all those beer mop carbs needed to survive, um, “college life.” From Manning’s signature cheese bings and the Graduate Cheeseburger to a beer and cocktail list fit for the best of watering holes, you’ll be glad your room for the night awaits mere steps away.

Adjacent to Brother Wolf, Thompson and King continue the Italian expression with the help of Milan native and chef consultant, Amalia Brusati, and chef de cuisine Salvador Sanchez. Representing all 20 Italian regions, Thompson offers a comprehensive wine list to pair with specialties such as Gnocchi Burro e Salvia (butter, sage, parmigiano reggiano) and Branzino (Mediterranean sea bass, cannellini, carrots, pine nuts). From their stocks, pastas and even the ladyfingers made for the most delicate of Tiramisu, everything is made in-house.

From the Queen of Thailand to Frank Sinatra, Holly Hambright has built her 35-year catering career upon excellence. And her all-day breakfast/brunch joint has been a Knoxville favorite for nearly 40 years. Along with breakfast staples, her list of Beautiful Bennies, Breakfast Bowls, and Market Legends, day drinking is a thing here with a range of mimosas by the glass or carafe, bloody mary, and breakfast margaritas. But, if you just want to keep it all business up front with no party in the back, Holly’s coffee offerings can hold your place until next time you’re just West of downtown.

In the heart of Knoxville’s Old City, this small brewery is known for its hand-blown glassware made right next door. Noted worldwide as one of the top Etsy sites for blown glass, you can see how the pint you’re drinking from is made the first Friday of every month 6-9 pm at Pretentious Glass Company next door to the brewery. If you can’t make the event, check out pretentiousbeerco.com where you can order a one-of-a-kind glass to add to your bar collection 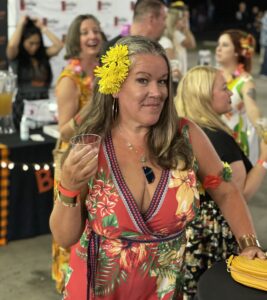 Melissa Corbin is a Tennessee-based travel and culinary journalist telling the stories of the folks and places that make their corner of the world so unique. You never know where she’ll turn up next. So, give her a holler over on Instagram @melcorbin.