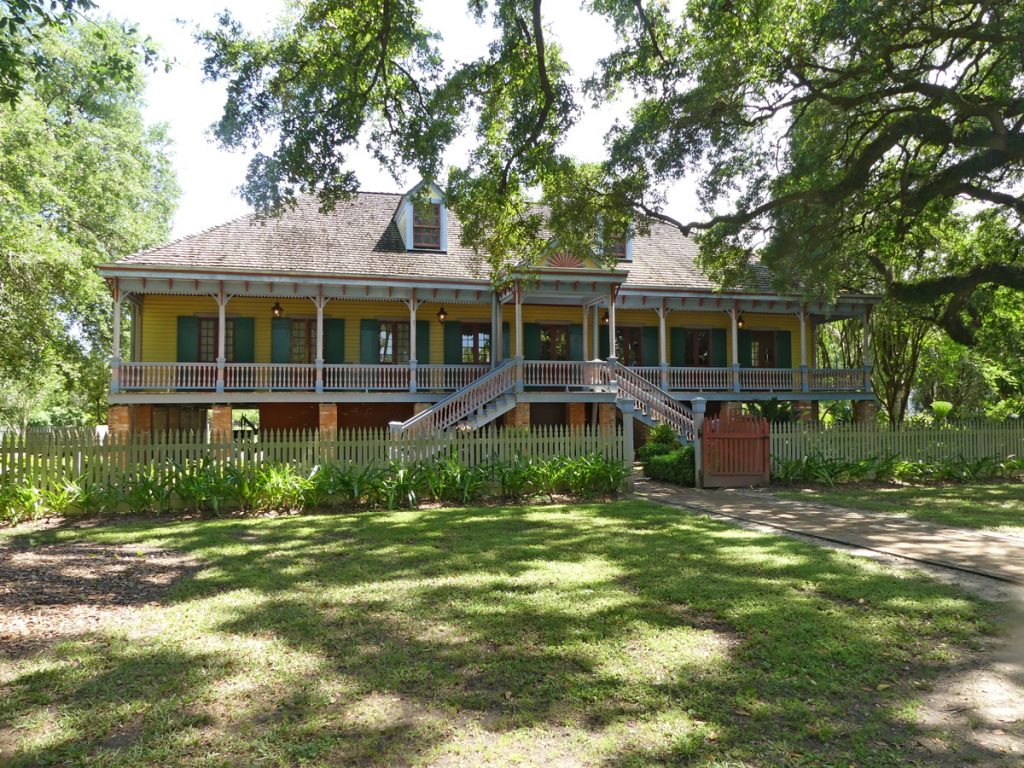 We think of southern ladies of yore as deferring to their gentlemen about anything concerning business. Not so with the ladies of Laura Plantation in Vacherie, Louisiana. Starting with Nanette Prud’Homme in 1808, the strong Creole women of this family managed the business of their sugar plantation in a masculine-oriented world until 1891.

During that time, Laura Plantation, which began as a French colony, became part of the United States, survived the Civil War, and experienced the Jim Crowe years. French, Creole, African, and American family members all played a part in the history told by the last Creole plantation owner, Laura Locoul Gore, in her 1936 memoir, Memories of the Old Plantation Home.

Locoul, born on the family plantation in 1861, lived to be 101 years old. She died in 1963, but her handwritten manuscript wasn’t discovered until 1993. It, along with extensive research, is the basis for the tours at Laura Plantation, named by Lonely Planet as “The best history tour in the United States.”

The Beginnings of Laura Plantation

A visit to Laura Plantation, which sits about 600 feet from the Mississippi River, is a step into the unique history of a southern plantation run by women. A guided tour of the house, gardens, slave quarters, and a special building dedicated to the history of slavery tell the story of the plantation and its people, particularly the women who ran it.

The family’s lineage began with a young Frenchman, Guillaume Duparc, who killed a family friend in a duel and was exiled from France. He came to the French colony in Louisiana and fought in the American Revolution. After the war, he married a (white) French Creole woman from Louisiana, Nanette Prue’Homme. A Creole is any child of an immigrant to Louisiana born there before the Louisiana Purchase, and all their descendants, including people of both European and African descent.

Guillaume died in 1808, leaving 41-year-old Nanette with three children, a plantation, and 17 slaves. Nanette managed the plantation for 21 years. In an effort to subvert American attempts to infiltrate the Creole sugar plantation system, Nanette established a corporation in 1829, Duparc Freres et Locoul Sugar Company. She headed the company and named her sons, Louis and Flagy, and daughter, Elisabeth, as board members.

Louis eventually became the plantation’s New Orleans agent where he happily resided and promoted the business by giving big parties. Flagy had no interest in management and wanted to be the overseer. That left Elisabeth to manage the plantation. So Nanette began grooming Elisabeth at a very young age to take over.

Passing of the Business from Mother to Daughter

Elisabeth was 26 when she met and married a Frenchman, Raymond Locoul, a wealthy wine producer from Bordeaux. She and her husband planned to live in France; however, neither of Elisabeth’s brothers was capable of managing the plantation. So, when her mother retired in 1822 at 61, Elisabeth, who was 33, took the reins. Nanette built a home a few hundred feet from the big house, named it Maison de Reprise, and moved into it with her maids.

With Elisabeth at the helm, the Duparc plantation became the largest wine importer in Louisiana as well as continued to produce sugar and various other crops. Elisabeth and Raymond had two children, Emile and Aimee. They were destined to become bitter rivals for the ownership of the plantation.

Rivalry Between Brother and Sister

Emile was not interested in the plantation and the Creole lifestyle; he wanted to become a lawyer. However, he eventually deferred to his mother, abandoned his desire for a career as a lawyer and married a cousin, Desiree Archinard, settling nearby. After three miscarriages, she produced an heir, Laura, who was legally entitled to inherit the plantation.

While on a business trip with her mother to France in 1855, Aimee met and married a French aristocrat, Charles Ivan Flavien de Lobel. Aimee and Charles made their home in France and had three children. Aimee, foreseeing the coming Civil War, urged Elisabeth to sell the plantation and come to France. But Elisabeth was unable to sell it, and for a time Union soldiers occupied the plantation home. After the war, Emile and Aimee and their families returned to the plantation. Little changed despite the end of slavery, and the former slaves continued to work on the plantation for wages that were not paid in cash but after ‘supposed’ expenses, often left the former slave in debt and tied to the plantation.

Desiree helped Emile manage the plantation while he pursued his long-held passion for the law, as a politician. He ran for and was elected to repeated terms as state representative for St. James Parish.

The Last Woman at the Helm

When Laura was 18, her father died, and she began to help her mother run the plantation. Over the years, sugar prices declined, and Laura was forced to take out a mortgage. By 1891, the plantations had become unprofitable. Both halves were sold at auction. Laura stipulated at the sale the name Laura Plantation could never be changed. The following year, at the age of 29, Laura married and moved away.

The last living relatives in the United States of Nanette and Guillaume Duparc are descendants of their son Flagy and an enslaved Creole woman named Henriette. A tour lasting between 75 to 80 minutes of Laura Plantation takes you through all this history and as well as the history of many of the enslaved people who lived there.