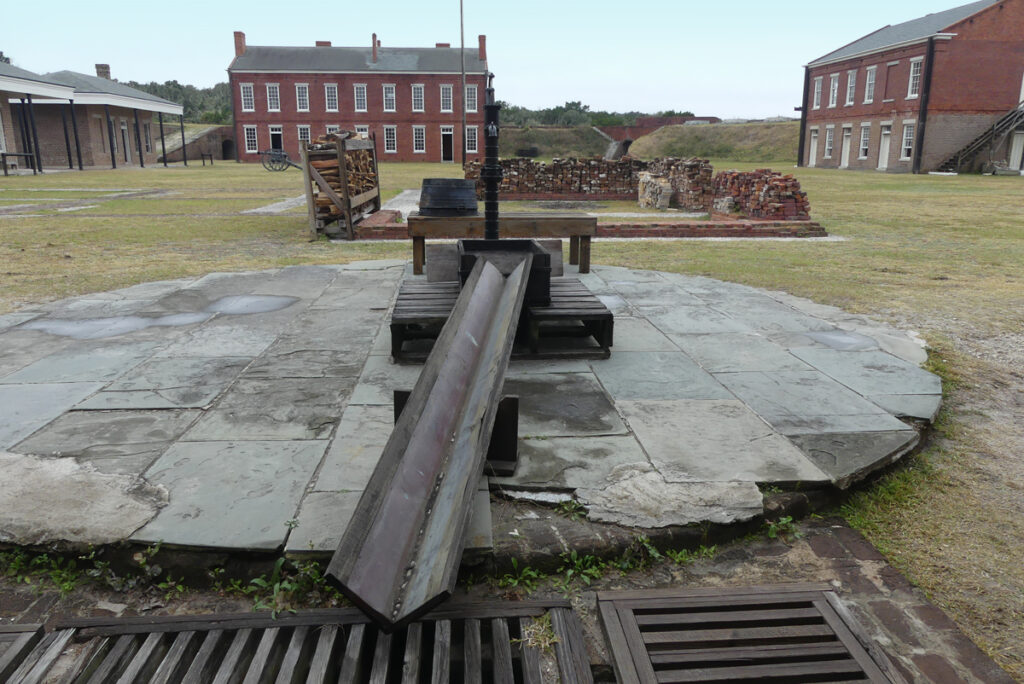 Amelia Island is a blend of cultures that lived under eight flags. It was a haven for pirates, con men, and hardworking settlers from many countries. From the Timucuans who met the first French and later Spanish settlers, to the Jim Crow era and the founding of American Beach, where African Americans could frolic freely, it has a unique history and offers a perfect vacation spot with fewer crowds than better known Florida beach towns.

The Amelia Island Museum of History is the perfect place to begin your Amelia Island trip. Its exhibits of the earliest inhabitants, the Timucuans, take you to the pre-European period. The museum is in the former Nassar County Jail. One of the more modern-time exhibits is a letter from a Black inmate to his friend “Billy.” The letter tells the difference in how white and Black prisoners were treated.

Throughout the island’s history, there is a thread of one culture trying to best another. Take the Museum’s Eight Flags Tour to learn more. Our guide, Barbara, took us through the museum exhibits sharing the island’s history. In 1513, Ponce de Leon sailed near here and claimed all of Florida for Spain. The French were the first to lay claim to Amelia Island. The colony was composed of Huguenots who were not welcome in France. Spain sent Menendez to found the Spanish colony of Saint Augustine in 1565. The Spanish realized the French were too close and needed to be removed, so they did so and raised the Spanish Flag over Northeast Florida. England quickly saw they were missing out on a wonderful island, and they took control.

Pirates loved the island because of its fresh water and good harbor. The museum has an interactive replica of a pirate ship, Margery. For several days, a group known as the patriots took over. The next flag was raised by a notorious con man, Gregor McGregor, who claimed to be representing a group called Free America. MacGregor raised what he called the “Green Cross of Florida”, a flag showing a green cross on a white field. Spanish soldiers, combined with American irregulars, and French-born pirate Luis Aury, forced MacGregor out and raised their plain white and blue checkered flag claiming the island for the Republic of Mexico. When the Civil War erupted, Confederates seized abandoned Fort Clinch. Union forces regained control of the island on March 3, 1862, and raised the American Flag.

A cruise on Amelia Island Cruises takes you past much of the history you learned at the museum of history. You pass the old town, the site of the original Spanish Fort San Carlos, now Fernandina Plaza Historic State Park. You get an excellent overview of Fort Clinch from the water, plus a very different view of Cumberland Island by cruising around it. The two captains, Bob and Benny, did an excellent job of sharing Amelia Island’s history.

The water views give you a good idea why pirates loved Amelia Island. For more about the pirates and the treasure they may have left somewhere on Amelia Island, visit the Maritime Museum of Amelia Island. The museum has models of galleons, a map showing known wrecks along the coast, and some fantastic artifacts. One display case has a jeweler’s furnace — the only one like it in the world.

On July 31, 1715, a Spanish treasure fleet composed of 12 ships ran into a storm on their way back to Spain. Eleven of the ships sank. Thousands of dollars’ worth of silver, gold, and jewelry, including the Queen’s jewels and the small cast-iron Jeweler’s Furnace, were found near the south end of Amelia Island under three feet of sand.

The first fortifications started in 1736, but construction of the present-day fort began in 1847. By the start of the Civil War, it was about two-thirds completed. First, it was under Confederate control. The Union gained control in 1862 and completed the fort.

The fort’s museum has a video telling workers’ stories, ranging from the baker to the rugmaker. You can tour the fort’s five bastions, guard rooms, prison, enlisted men’s barracks, bakery, blacksmith shop, storehouses, hospital, kitchens, lumber sheds and galleries. All are recreated as it was when garrisoned by First New York Volunteer Engineers in 1864, and there are re-enactors to explain how things worked.

American Beach began in modern days when old prejudices still ruled. Millionaire Abraham Lincoln Lewis wanted a beach retreat in 1935. You’d think this would be easy enough, but there was one thing that made it almost impossible; Lewis was Black. Jim Crow Laws restricted African Americans’ use of public beaches.

But Lewis hadn’t gotten to be president of Jacksonville’s Afro-American Life Insurance Company and Florida’s first Black millionaire without being extremely intelligent. He solved the problem by buying 33 acres of beachfront property in southern Amelia Island. He invited employees and friends to join him and named it American Beach. His motto: “A place for relaxation and recreation without humiliation.” He later expanded the community to 216 acres. In 1940, many lots were still unsold. He offered them for sale to the Black community. Evans Rendezvous, the local nightclub at American Beach, played host to celebrities like Cab Calloway, Ray Charles, and James Brown.

American Beach boomed until Hurricane Dora and the Civil Rights Act in 1964. After, Black people could go to any beach and American Beach declined in popularity.

The next chapter in American Beach history saw a new champion, MaVynee Oshun Betsch, known as The Beach Lady. MaVynee was a world-famous opera star who sang in Paris, London, and Germany during the mid- 1900s. She was Lewis’s great-granddaughter.

As MaVynee watched her beloved beach decline and become invaded by McMansions and developers with no respect for the environment, she gave up her career in 1975 and returned to American Beach. She worked for environmental causes and gave tours from her motorhome to educate visitors about the history of the beach. She lived part of the time in a decrepit, yellow, cinderblock home where, from the window on the second floor, she could gaze out at her favorite sand dune, which she named NaNa. NaNa in the Ghana language means ruler, monarch, and grandmother. The dune stands 60 feet high and is the tallest dune in Florida. She lost her view when two McMansions arose, blocking the dune, but eventually won her fight for the dune’s protection. In 2005, the same year she passed away, the National Park Service acquired 8.5 acres containing NaNa dune for preservation. MaVynee’s ashes are buried atop NaNa.

American Beach Museum tells the history of the beach with artifacts, photos, and clothing, and it tells MaVynee’s story. When you visit, you can view NaNa. Dog-friendly Burney Beachfront Park has a boardwalk leading to the white sand beach. There are picnic tables and restrooms.

On Amelia Island, you walk in the footsteps of many cultures and people. You leave with a deeper understanding of what shaped not only this small island but our entire country.