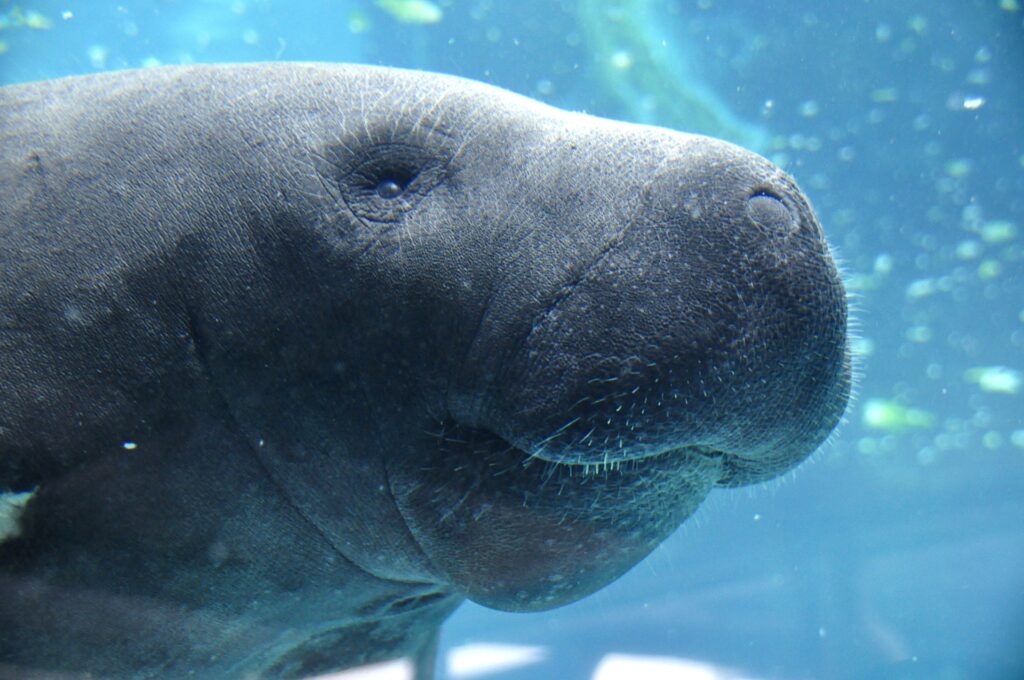 A childhood memory led me to the waters of western Florida. There, I met one of the most amazing creatures in the world.

It was the summer of 1996, and I was six years old. I may have been little, but I was focused. I wanted to be a scientist. Every day, I spent time in the backyard watching ants, birds, and other wildlife. But the highlight of my day was the half-hour spent with my favorite nature documentarians, Chris and Martin Kratt.

I took myself far too seriously, thinking of the informative children’s show as training for my hoped-for future career. But it stuck with me. That summer, I met the manatees. I was amazed by the slow-moving, peaceful creatures that slept while holding their breath and grazed seaweed with their unusually mobile lips. I was heartbroken by the scars they bore from passing speedboats.

But most of all, I was flabbergasted to learn that they lived very near to me. They weren’t on another continent like lions or elephants. They were from Florida – the very place my family had vacationed a few months before!

The hosts of Kratt’s Creatures had donned snorkels and fins like the ones I’d worn at the beach. They tumbled into the water and swam alongside the tranquil giants. I wanted to do that, too. I hoped that someday when I became a scientist, I would have the chance.

Crystal River is a small town on Florida’s west coast. And when I say “small town,” I mean it in the truest sense of the words. There are a few restaurants, shops, and a private art gallery. But mostly, life in Crystal River revolves around its unique natural resources.

The Crystal River National Wildlife Refuge shelters solitary manatees year-round, but their numbers increase to around 600 individuals from mid-November through March, when they retreat to the Three Sisters and other natural hot springs as ocean temperatures drop.

Manatees cannot survive in waters below 60 F and experience cold stress syndrome at temperatures of 68 F or less. The life-sustaining Hotsprings maintain a balmy 72 F year-round, welcoming West Indian manatees from all over Florida and the surrounding waters.

Crystal River is also the only place in Florida where you can legally swim with manatees in their natural environment.

I didn’t become a scientist. But during a trip to Orlando, my husband and I took an unforgettable day trip to meet the manatees of Crystal River.

It was February, the time when the number of manatees at the hot springs typically peaks. We rented a car and left our hotel at 4 a.m. Then we drove for nearly two hours on unfamiliar roads, passing highway toll booths and rural homes.

Before 6 am, we arrived at the dive center. Preparations were already underway for our 7 am departure. Early in the morning, the waters would be less crowded with tourists and the manatees at their most active.

Our guide looked us over and tossed us wetsuits. Along with half a dozen would-be snorkelers, we pulled our borrowed wetsuits on over our swimsuits and shorts. Soon, class would be in session.

We crowded around a television – one of the old-school tube-types, thick and bulky. We watched a video outlining the Florida Fish and Wildlife Conservation Commission’s manatee viewing guidelines. Manatees are an endangered species and thus protected by law. We learned the don’ts – don’t touch, feed, or pursue the manatees, and don’t splash or make unnecessary noises – and the do’s – move slowly and watch from a distance.

Then, the guides gave us a pop quiz to make sure we understood. While some tours advertise that it’s okay to touch a manatee with one hand, our guides asserted that this would not be permitted. Our only contact would be if a manatee curiously inspected us, in which case we were to remain perfectly still.

We boarded a bus and then a mid-sized flat-bottomed boat. We motored slowly down the river. A fog lay low over the water, and the morning was chilly. Our guide informed us that unseasonably warm weather in previous weeks had thinned the resident manatee population, prompting them to migrate back to the sea. The warmer waters had also fomented an algal bloom, reducing underwater visibility to just a few feet.

Despite these challenges, we soon spotted a manatee as she surfaced to breathe. The boat slowed to a stop several meters from the spot and its motor went silent. We slipped into the water as noiselessly as possible.

In the clouded waters, we couldn’t see this manatee or the next. Finally, our captain idled near the inlet of the Three Sisters hot springs, where the fresh, warm water was clear.

Buoys marked a “safe zone” that manatees could enter but people could not. I swam into a small peninsula created by the buoys, watching small striped fish as they darted about. Quietly, the guide called out, and all in the group swam up to one of the buoyed ropes.

Opposite the spring, the water was the color of weak coffee. But there, stirring up sediment as he grazed, was a solitary male.

The size of this bull manatee blew me away. I knew academically that manatees could reach a length of 13 ft and weigh over 1,300 pounds, but this bruiser was the size of a Volkswagen – at least! He was grazing unconcernedly less than ten feet away. With a slow flick of the tail, he disappeared into the safe zone.

Manatees are classed as a vulnerable species. It is currently estimated that just over 6,000 of 13,000 total manatees call Florida home. This is up from approximately 2,000 manatees in Florida during the 1990s.

Some conservationists feel strongly that any contact with humans is harmful to manatees. Others argue that the resources and public awareness generated by tourism are vital to the manatee’s long-term survival.

According to Crystal River National Wildlife Refuge Manager Joyce Palmer, “The hardest issue we face is managing the over 250,000 annual in-water visitors. We absolutely love the enthusiasm that people have for wanting to see these beloved creatures, but we want to educate the public about safety for both them and the manatees.”

Responsible tour organizations brief visitors on the rules and enforce them during the tour. Speed limits and no-wake zones are in place to prevent speedboat strikes. And according to our guide, the fact that human swimmers are present in the water further discourages boaters from breaking the rules about the type of craft and speeds they can use in the vicinity.

During peak season – the time when manatees seek out the warm hot springs in order to survive winter temperatures – human activities are not permitted within seven manatee sanctuaries or “safe zones.” These areas are buoyed and swimmers are not allowed within, giving the animals a private space away from splashing flippers and prying eyes.

Before booking a manatee tour, you should do thorough research to make sure that the company and its guides abide by these rules. Ask yourself: “Do they educate guests about the dos and don’ts? Do they post videos or are they tagged in videos in which guests touch the animals or otherwise get too close?”

Don’t give your tourism dollars to irresponsible establishments. Supporting companies that allow tourists to harass the animals endangers manatee survival in the long run.

The Refuge itself seems to support the idea that conservation begins with education. Of visitors to the refuge, Palmer said, “Our hope is when they leave, they will take that experience with them and want to protect manatee habitat.”