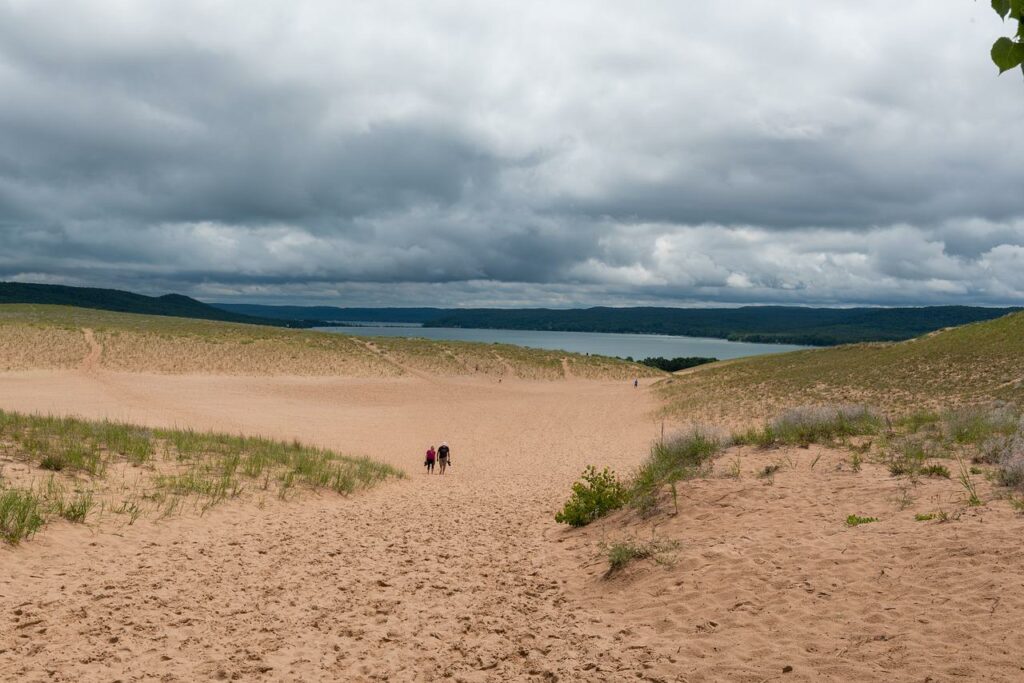 Do you know that feeling of how a smell, sound, or taste takes you back to some of your fondest memories? That’s what happens to me when something reminds me of my summer family vacations in Michigans Sleeping Bear Dunes National Lakeshore. My late father treated us to a trip to the Dunes nearly every summer and, certainly, if we ever had guests visiting he would introduce them to this amazing landscape. So, after all these years, whenever I travel to Michigan, I try my best to visit the Dunes.

Although you won’t likely encounter bears in the wild, they are still around, particularly on the park’s southern side. Bears are shy creatures and tend to stay away from people and avoid confrontation.

Sleeping Bear has lots of animals and places to explore. There are white-tailed deer, porcupines, bald eagles, and coyotes, to name a few. Explore this thrilling unspoiled wilderness on Lake Michigan and hike some of the many miles of designated trails.

The Sleeping Bear Dunes got its name from a Native American legend. According to the legend, there was a massive forest fire on Lake Michigan’s western shore. The fire forced a mother bear and her two cubs to find shelter at the lake in the hopes of making to the opposite shore.

The mother and her two cubs swam for many miles, but the two cubs eventually got tired and slowed down. Finally, the mother bear made it across to shore and waited on a high bluff for her cubs to arrive. Unfortunately, the cubs drowned from exhaustion, but the mother bear remained, patiently waiting and hoping they would still appear.

The Great Spirit was amazed by the mother bear’s faith and determination, so it created two islands, namely the North and South Manitou Islands, in remembrance of the cubs.

The sleeping bear was buried under the sands of the dunes by the wind, where she still waits to this day.

Sleeping Bear is home to several birds and animals, some of which are endangered or threatened. The variety of animals is due to the natural habitat that comprises lakes, streams, dunes, cedar swamps, and hardwood forests.

If you’re driving, hiking, or paddling through the park, you will likely encounter animals and may even see some frogs or coyotes at night! The mysterious cougar, who may or may not be present in this part of the country, has thought to have been sighted before, and you may be a lucky traveler spotting one!

Bears are rare sightings in the park, but they aren’t uncommon. Common forest animals include:

You’ll find the following creatures in the rivers and inland lakes:

There are 50 species of mammals found in the park, and most are small creatures. An example is an eastern chipmunk. This chipmunk is nicknamed the “timber tiger” as it has a large appetite and is brave when snatching food from picnic tables and campsites.

Another rare predator that you might spot at sleeping Dune is the bobcat. Its color and patterns range from spotted or stripes to shades of brown and beige. They are solitary animals and can be found in remote areas of the park while remaining well hidden with camouflaged fur. During the day, these beautiful bobcats will sleep in a rock crevice or hollow tree.

Cougars are making a comeback in Michigan after being nearly wiped out in the early 20th century. There have been many reports of cougar sightings at Sleeping Bear in recent years, but it hasn’t been recognized officially. Since cougars can’t roar, they get classified as small cats. Cougars are known to be secretive animals, but park rangers will still post warning signs to ensure hikers know what they should do if they encounter cougars on the trails.

Sleeping Bear is a paradise for birdwatchers. How could it not be with 240 different species of birds in the area?

On the shoreline, you may spot:

The Prairie Warbler is one of Michigan’s most threatened birds. These graceful songbirds are bright yellow with black streaks on their wings, and the males often have a chestnut patch on their backs. Listen to their beautiful songs echo through the woods as they nest in overgrown pastures and pine stands.

The charming Piping Plover has been threatened by coastal development. They are small and round with a greyish-brown body and black color. You can find them on the shoreline alone or in small groups looking for worms or insects to eat in the sand. Every year, park rangers rope off small sections of the beach to allow the plovers to lay their eggs in the sand and protect them from unwary visitors who may step on their small eggs.

There are five plant zones in sleeping bear:

The plant life in Sleeping bear is just as fascinating as the animals that call this place home. The vegetation is adapted to survive the hot, dry summers and freezing winters. You will see succulents like sea rocket, tough leathery shrubs like bearberry, and pitchers thistle.

The pine/oak forests are the best place for a photo op! The towering red pines and white oaks block out the sunlight so mosses and ferms can thrive while providing shelter to animals and birds. In addition, the dunes are home to “ghost forests,” eerie groves of trees that were buried many years ago by sand and later uncovered by the same incessant winds.

Even though it is near-desert conditions, the vegetation is beautiful and thriving, thanks to the Lake Michigan waters. It keeps the air cooler in the summer, warmer in the winter, and moist all year round.

While it is one thing to read about how amazing the fauna, flora, and sights are at Sleeping Bear Dunes, it is an entirely unique experience when you see it for yourself. Exploring the thick, green towering forests or spotting a mother deer and her fawn in the distance will make your heart race with glee!

The Sleeping Bear Dunes holds so many fond memories for me, and I guarantee it will do the same for you and your loved ones too!