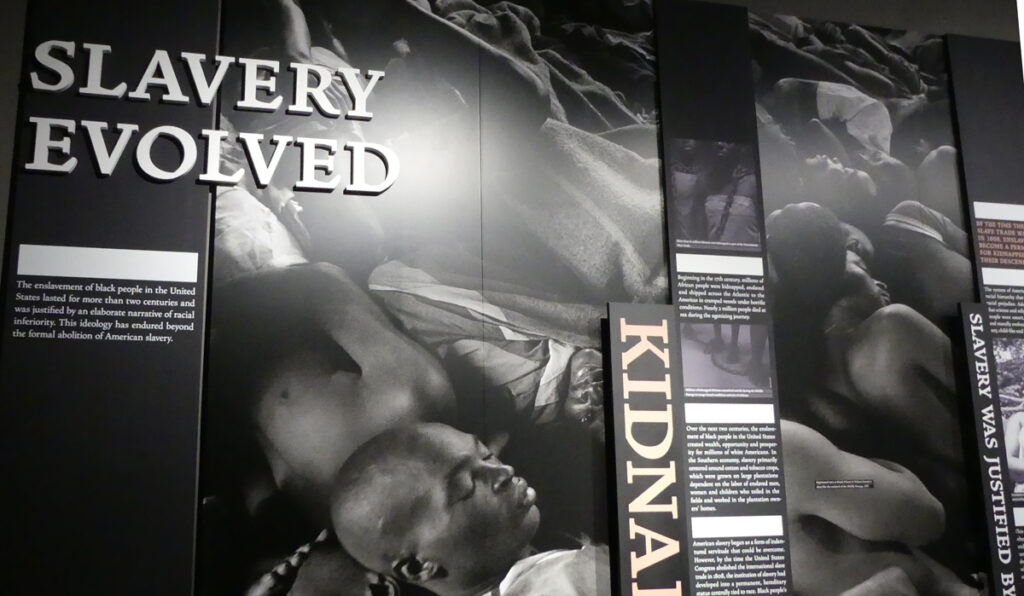 Montgomery was the spark that lit the fuse on the long-simmering fight by African Americans for their civil rights. It began a movement that is still ongoing today. Several museums there trace the story. No matter your race, if you believe that the American Flag stands for “liberty and justice for all,” you should visit these museums.

Rosa Parks Museum commemorates the events beginning the Civil Rights movement. The museum honors an ordinary woman who became extraordinary by a simple act of claiming her legal rights. Rosa Parks was a seamstress who earned her living working in a downtown department store. When she acted on her convictions and refused to give up her seat on a segregated bus to a white man, she became a symbol of courage. This was the spark that began the historic bus boycott where Black citizens demanded their civil rights. It was the birth of the Civil Rights Movement. The museum has memorabilia related to the boycott like a motorcycle jacket, badge, desk nameplate, and magazine photos of Deputy Sheriff Captain Frank Kennedy. Kennedy was a motorcycle patrol officer who protected the pickup and drop-off points used by boycotting car-poolers driving makeshift taxis.

You enter the museum and see a bust of Rosa Parks and some artifacts. In a small room, you watch a film showing what led to Rosa’s courageous act. Then the film ends and doors open to a scene of a bus stop that is becoming rather crowded. You watch as if standing on the sidewalk looking through the bus windows so you feel like part of the crowd. Remember, this is the age of segregation. Whites sit in front and there is a bar that fits into each seat. Black people must sit behind that. You watch as the “white” seats in the front of the bus fill up. Rosa sits in the first one of the “Black” seats. When a white man steps into the bus and stands in the aisle next to her, the driver orders her to stand and give her seat to the white man. Rosa was tired physically after a hard day’s work but also tired of being treated as a second-class citizen because of her skin color. She refuses the driver’s demand with a gentle, “No.”

The bus driver, Bruce, threatens her with arrest. He states, “I can call the police.”

“You may do that,” is her simple reply. This touched off the beginning of the battle for civil rights that spread like a raging wildfire from Montgomery across the nation.

The last section of the museum shows the way the civil rights workers tried to support the Montgomery African Americans boycotting this unfair bus system.

Freedom Rides Museum is one of Montgomery’s newest museums. The site was once the Greyhound Bus station in Montgomery. In 1961, a group of brave young people, most in their teens, none of them older than 22, risked their lives for their constitutional rights. They called themselves the Freedom Riders. They passed through Montgomery and were harassed in this station. The museum tells their story. There are plaques that tell about each of these courageous young people.

The National Memorial for Peace and Justice is a cross between a museum and a memorial cemetery. Visit the main building housing a theater telling the history behind the memorial, and watch the short film. Then walk across the street and view the sculptural dioramas and gardens. As you walk under a paved walkway, there are columns embossed with the names and dates of the Black people lynched in each county of each state. The numbers are staggering.

Along with these memorials, there are several sculptures depicting African Americans’ fight for their rights. This museum offers a free trolley ride to your next stop.

The Legacy Museum: From Enslavement to Mass Incarceration was opened April 26, 2018, by the Equal Justice Initiative at the site of former slave auctions. The museum begins with exhibits depicting the slave auctions, sharing details of what it was like to await being sold to the highest bidder.

The next section has holograph-like “enslaved people” who tell you about their personal experiences. It is so lifelike, you feel you are speaking with real people. It’s an interactive 3D experience you will not forget.

The Southern Poverty Law Center (SPLC) is a working monument to the ongoing history of the Civil Rights Movement. The staff keeps abreast of injustice and tries to correct it, but it’s also a museum with interactive displays and interpretive panels. In front of the building, there is a 20-by-40-foot digital Wall of Tolerance Civil Rights Memorial. Maya Lin designed the wall in 1988 to honor 40 men and women killed between 1954 and 1968 in the fight for civil justice for all. A waterfall flows across the black granite Martyr’s Table. The words etched into the stone read, “We will not be satisfied until justice rolls down like waters and righteousness like a mighty stream.”

Dexter Ave Baptist Church and Parsonage are where Doctor Martin Luther King, Jr. was drawn into the Civil Rights Movement. Dexter Ave Baptist Church is still an active congregation, so be sure to respect services and rules, but if you can take a look inside, it is inspiring. The basement mural, painted by John W. Feagin, is a beautifully created art treasure depicting scenes from Dr. King’s life.

Even without its history, the church, built in the 1880s, is a treasure from a historic point of view because of its age. The stained-glass windows in front and the ones above the side windows date to the 1880s. An interesting fact is that this church’s congregation first began meeting in a slave trader’s pen. They designated the church a national historic landmark on June 3, 1974.

The parsonage is not open for tours at this time. When it reopens, be sure to visit it. Some furnishings are pieces the King family owned when they lived in Montgomery. I had the good fortune to tour it pre-COVID, and it was a fantastic experience. The porch that still shows remnants of the vicious attacks made on Dr. King and his family while they lived here are vivid memories.

These are more than museums that tell about things that happened in the past. These places each have a foot in the past and one in today’s world where this fight is still alive and ongoing.