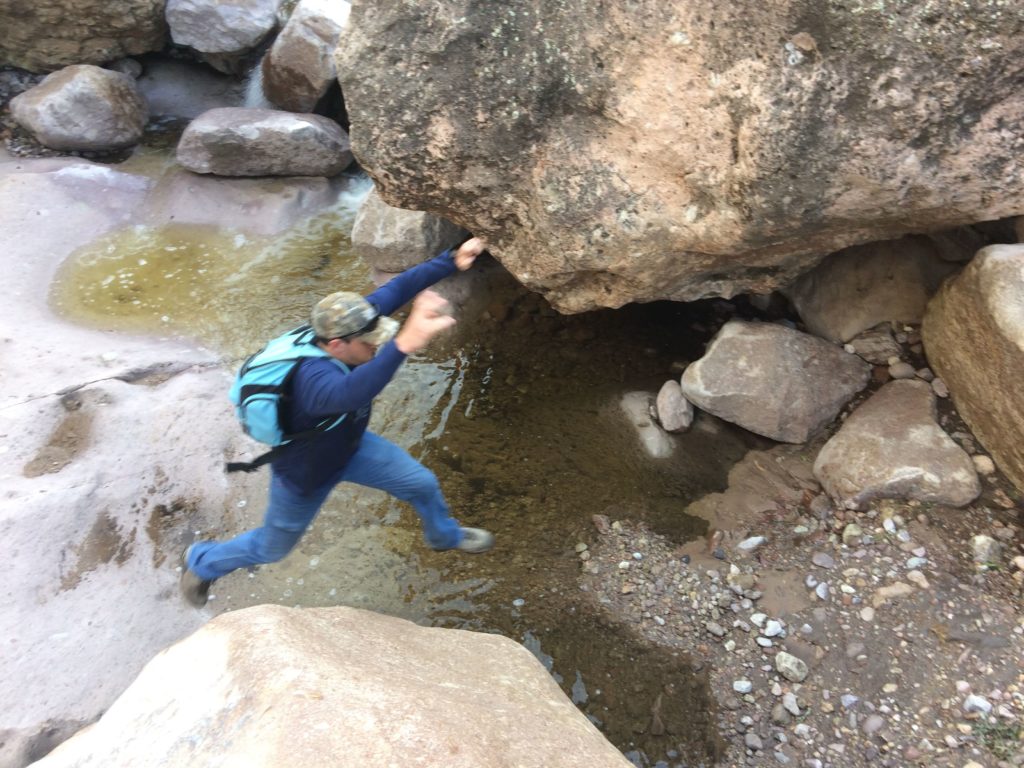 “Are you sure this is the right way?” My husband, Ben, stopped me and took a critical look at the map. After five miles of hiking, we were deep in the Superstition Wilderness and apparently off the path. I put my hands on my hips and looked at the huge rock formation just to the north. Battleship Rock is an unmistakable landmark in the middle of the Superstitions, so at least we weren’t technically lost, even if we had strayed from the trail.

And good thing, too. The Superstition Wilderness, a vast stretch of uninhabitable land 45 minutes east of Phoenix, is famous for the lives it has claimed. From the dawn of Southwestern civilizations to the 21st Century, many have vanished, their bleached bones found years later.

The Superstitions are named well. Tales of hidden gold, headless riders, and mysterious trails have appealed to romantics and treasure hunters from around the world. Just a century ago, this deserted landscape truly was the wild west, complete with mineshafts and gun-toting prospectors.

Treasure in the Superstitions

There was a historic mineshaft marked on our trail map. I had been excited at the idea of finding an old mine, but when we finally did, it was disappointingly anticlimactic. We could only climb a few feet into the blocked mineshaft, filled in by some frustrated prospector a century ago.

During a trip back to Mexico, the family was ambushed by members of the Apache tribe, and the only two survivors fled home without sharing the location of their mine. However, they supposedly left behind a map carved into two rock slabs, which you can view at the Museum of Natural History in Mesa, Arizona.

In the 1870s, a German prospector claimed to have found the mine. On his deathbed in the 1890s, he drew a map and gave it to his neighbor. The story was believed to be a hoax… until a box of gold was discovered under his deathbed.

Danger in the Superstitions

We didn’t come close to finding any gold, but we did eventually figure out our trail map well enough to find the natural treasure we were looking for. As our trail map directed, we scrambled over a low saddle of Battleship Rock and found ourselves facing a river and a thick wall of thorn bushes.

But these obstacles hardly attracted our attention. A breathtaking canyon of smooth vertical rock rose in front of us where a shallow river cut a deep line through the mountain. So this was the reason why hikers persevered through five or six miles of trekking and bushwhacking to arrive at this place.

I wanted to follow the river through the canyon, but Ben (ever the pragmatist) pointed out that we had just enough time to get back before sunset if we pressed on to cover the remaining six miles of the loop. So we snapped a few photos and picked through the slippery rocks and thorns toward the trail.

The Superstitions is not a place to hang out at night, unless you’re well prepared. In the summer, daytime temperatures of above 100 degrees can bring on heatstroke in a matter of hours. In fall and winter, the near-freezing nights spell danger for hikers stuck in the mountains after dark.

However, in past decades, the natural dangers of the wilderness were only a secondary concern to those seeking the Lost Dutchman’s Mine. Until the mid 20th Century, it was unwise to enter the Superstitions unarmed. In the 1800s, many prospectors had laid claim to land and mines, and they were prepared to defend it with deadly force. After the news of the Lost Dutchman’s Mine spread, corpses of treasure hunters replaced the bodies of prospectors in the Superstitions.

In 1931, a treasure hunter named Adolph Ruth disappeared into the mountains. All that he left behind was a note in a bottle in the Salt River saying he had found the mine. Later, his skull was found with a bullet hole in it. And he wasn’t alone in his fate. Several people who claimed to have found the mine met strange deaths, and dozens more seekers lost their lives as they searched.

Most disturbingly, many of the bodies found in the wilderness had their heads detached from their bodies… and sometimes, only their skulls were ever found. Those who are superstitious about the Superstitions believe there is a curse that protects the gold mine.

Fun in the Superstitions

Fortunately, like most of today’s visitors to Superstition Wilderness, I lived to tell my story of adventure in the mountains (despite the thorns, cacti, and slippery rocks). Perhaps because I wasn’t searching for treasure?

As the sun edged closer and closer to the Western horizon, Ben and I picked up our pace. With two miles left to go, we broke out into a run and sped up and down the hills until we skidded to a breathless stop at the pavement in front of the parking lot. The gate would be closed in 15 minutes—we had just made it. We climbed into the car and pulled out, thankful our car hadn’t been locked in.

As we wound our way from the wilderness to the busy metropolis of Phoenix, time and legend seemed to dissolve into a mist. We passed the Lost Dutchman State Park, where tired hikers emerged from trails favored by treasure hunters. We passed Goldfield Ghost Town, an Old West amusement park with a saloon, gunfight reenactments, and souvenirs. We passed the Lost Dutchman Museum, which showcases facts and legends of the area. Finally, we emerged onto the highway, where the modern world swept us into its technological energy.

I looked behind us at the indigo outline of the Superstitions against a darkening sky. It’s hard to believe that only a hundred years ago, this used to be the Wild West. Now, it’s a place for outdoor enthusiasts and history buffs to spend a Saturday. Times sure change. Still… if you’re looking for some mystery and a little adventure, you’ll be sure to find it in the windswept wilds of the Superstitions.