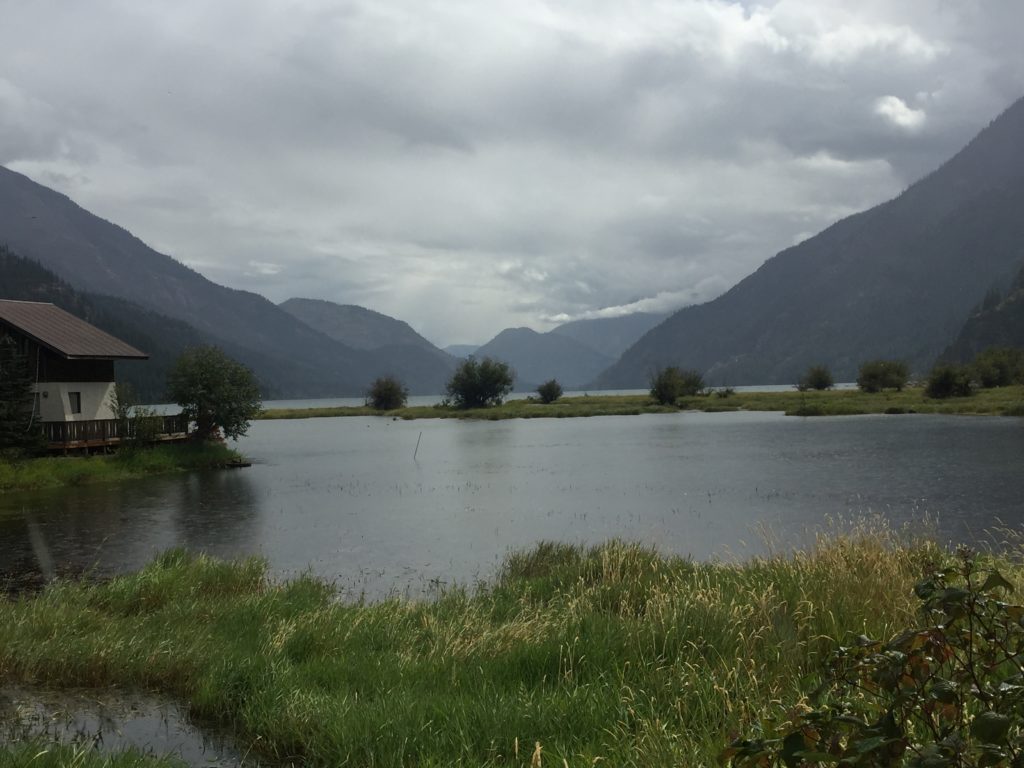 Tucked in the rugged North Cascade Mountains near the Canadian border, is a town unreachable except by ferry, foot or flight. Remote as Stehekin is, the Washington town is a hub for nature lovers looking to hike, kayak, ride horses or fish in a national park whose glacier-tipped peaks are difficult to access.

Stehekin, with a year-round population of 95 people, sits at the headwaters of Lake Chelan, a 50-mile long lake that is the third deepest in the country. The town’s name is a Native American word from the Salish, meaning “the way through.” It was one of the few places Native Americans found to cross the North Cascade Mountains, some of whose craggy peaks reach 9,000 feet. For those hiking in, a very challenging 15-mile trail, or an easier 23-mile one, allow backpackers to reach Stehekin from a scenic highway that is only open in the summer months because of snow and avalanches.

Risking the Weather to Make the Trip

Amid reports of smoke-filled skies from wildfires and the threat of all-day rain, a friend and I made a three-day trip to Stehekin in September, despite the foreboding weather reports. I hoped that the Pacific Northwest saying—“if you don’t like the weather, wait five minutes”—would save us from being cooped up inside a place that is an outdoor playground. And it did. Though there were still a few small wildfires burning nearby when we arrived at the Field’s Point Landing for the ferry, the smoke had cleared and the sky was bright blue, dotted with white clouds. Our ferry, an express, took an hour and forty-five minutes to reach Stehekin. The regular ferry takes four hours.

Visitors can choose from among a variety of accommodations including two hotels and several campgrounds. The most prominent hotel is The North Cascades Lodge at Stehekin, which sits at the ferry landing, overlooking Lake Chelan. My friend and I opted for the more economical and rustic Stehekin Valley Ranch, nine miles up the road, which offers several different kinds of cabins, all with a full meal service.

Bethany, a Ranch hand, driving a repurposed school bus, met us at the ferry. We bumped a half hour up the 9-mile dirt road to the Ranch. When we arrived, Bethany pointed us toward our “Tent Cabin,” a wood-walled structure, which had a canvas roof and canvas covered windows. The tent cabin came with beds and linens, as well as kerosene and battery operated lamps. Just like camping, there was no lock on our Tent Cabin. There was also no phone service and only limited Internet at the Ranch and in all of Stehekin.

The main Ranch building, which housed the showers and bathrooms, was a two-minute walk from our cabin. That building also housed the enormous dining room, the hub of the property, where all three meals were served. At one end, was a giant wood-burning stove in front of a wall of windows looking out at a green field and a line of mountain peaks. A pot of hot water and one of hot coffee sat on the hearth. Three long family-style wooden tables and benches filled the room, along with a few smaller side tables. Tucked above the dining room, at the opposite end from the stove, was a loft area, with comfortable chairs, reading lamps and a bookcase, filled with books left by previous travelers.

After a four-hour drive from Seattle to the ferry, (longer than normal because of a roadwork detour), nearly two hours on the boat, and a half-hour drive to the Ranch, my friend and I were nevertheless anxious to spend our first afternoon outdoors. The weather report forecasted rain for the next two days, so we worried this might be our only opportunity for a dry hike.

We took one of the town red shuttle buses that travel four times a day up and down Stehekin’s only road, and headed two miles up, to the Agnes Gorge trailhead. The hike, a flat, easy five miles round trip, took us through a forest of old-growth western red cedars. The trail ended at a series of small but powerful waterfalls and a view of towering Agnes Mountain, which still had a patch of September-snow.

We returned to the Ranch for dinner, which is served cafeteria-style between 5:30 and 7 pm. The food tended toward a traditional meat and potatoes menu but included multiple vegetable side dishes, salad and other vegetarian options. Dessert—a choice from seven different fruit pies— was a highlight.

The next day, the weather held, so my friend and I set out on mountain bikes we rented at the hotel on an honor system. (The Ranch also rents electric bikes.) We meandered toward the ferry landing and town, stopping to admire the rushing milky green river, where brick red salmon pooled. We also checked out Rainbow Falls, where a powerful cascade of water fell 312 feet. Shortly thereafter, the rain came and we made a break for the nearby Stehekin Pastry Company. It was packed, mostly with scruffy young hikers, gorging on cinnamon buns, pizza and cookies, as they took a break from the Pacific Coast Trail, which passes within a couple of miles of Stehekin.

After a half hour, the rain stopped and we continued toward town. We parked our bikes and toured “The Garden,” a dahlia-filled acre of organic vegetables, with beehives and a pen for goats nearby. The garden sells vegetables, honey, goat cheese as well as candles, soap and tinctures. Afterward, we dallied at the top of the lake, admiring the estuary. The view, of tree-covered mountains hugging the lake’s shore, was stupendous.

The next day, our last, brought more blue skies, so we decided to hike again to soak up as much of the rugged, isolated, mountains as possible. We took the bus to the end of the road once more, where we decided to hike part way up the eight-mile trail (with a 6,500-foot elevation change) to MacGregor Mountain’s peak.

We were rewarded after a little more than a mile and a half of rocky, switchback trails with a picturesque view of Howard Lake, a serene alpine lake. Lush, bright green foliage grew at the water’s edge. A few, sluggish ducks swam through a spray of lily pads. Densely packed Pine Trees ringed the lake and the top of MacGregor Mountain looked down upon us.

After we returned, we lounged in the Ranch’s hammocks and read our books before dinner. We had only tried a few of the many activities available in Stehekin—enough to know there was plenty still to explore on a return trip.