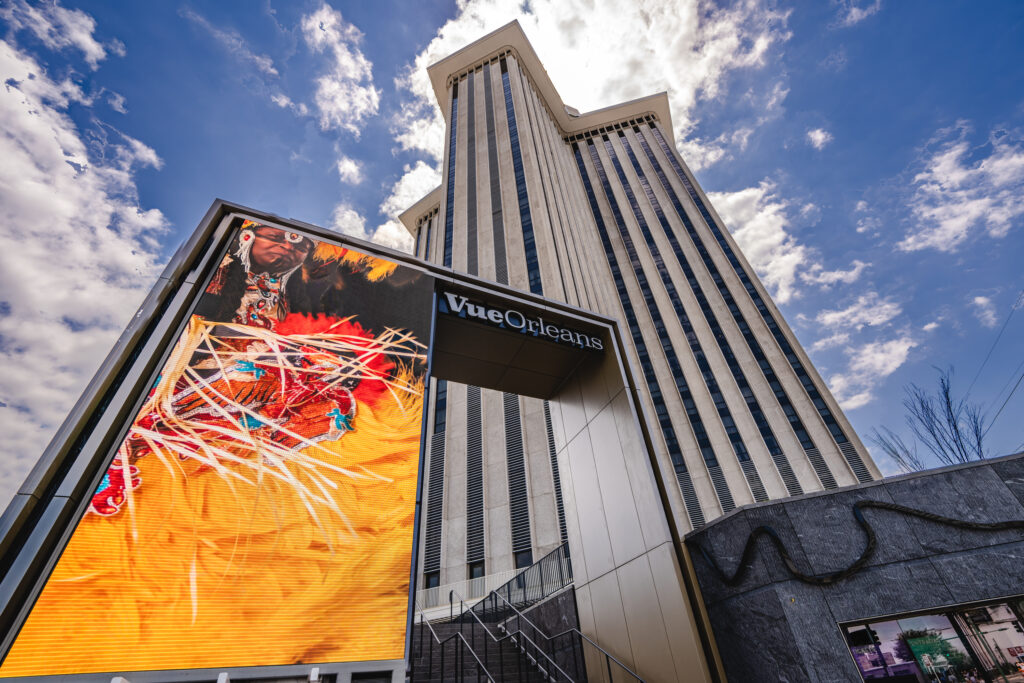 In this episode of World Footprints, Ian and Tonya Fitzpatrick talk with Vue Orleans developers Paul Flower and Henry Coaxum. They will share a bird’s eye view of New Orleans from the top of Vue Orleans, an extraordinary new museum that dives deep into the city’s history that Henry Louis Gates is helping to tell.

The Building that Defined New Orleans

The Four Seasons Hotel was built through a lease with the city of New Orleans. It was with a commitment to build Four Seasons Hotel and Residences and to do something that would be available to the public and would uniquely help explain what New Orleans is about. Paul and Henry first made three hires: Henry Louis Gates, Dr. Lowry Powell, and Jim Cortina. Cortina brought the capability of bringing this cutting-edge technology, and Dr. Gates and Dr. Powell helped lead a team of historians to help make sure that the attraction was historically accurate and told the story of New Orleans from its inception to today and why culture is what it is today.

From history and culture to food, art, festivals, and music, there’s a taste of this magical city for all. Vue Orleans offers a one-of-a-kind experience that makes New Orleans a tale that’s always worth telling. The greatest thing about it is that local people got involved under Cortina Productions. The people were all engaged in everything from music, art, culture, etc. It provided an opportunity for folks to make money and engage in something that they truly love. Everything was done by the locals that cared. Many of them consider it as a work of their passion, which emanates throughout the whole facility.

The goal of Vue Orleans is to tell the story of New Orleans’ to people who don’t live there, and it is the perfect opportunity to be the consigliere of the city. There is no other Vue Orleans in the country, and it is a place that people will need to come to first to see its magnificence. For Paul, even if you are a native of New Orleans, you will learn something about the city you did not know before. You will learn a lot about certain buildings and sites. You’ll learn about neighborhoods you may have driven through but haven’t stopped looking at.

Learning Opportunity for Everyone

If you have young adults and children, they will thrive with the interactivity of Vue Orleans and the Four Seasons Hotel. It is a great opportunity for school kids to learn to have tours. Henry and Paul say they plan to have interactive learning materials for kids because it tells the culture, history, art, and why New Orleans is the most multicultural city in the world.

The interior of Vue Orleans

The top floor of the museum contains a map covering the territory from Lake Tosca in Minnesota to Louisiana and the Gulf of Mexico. The concept came from Jim Cortina and the Cambridge Seven’s office. Cortina mentioned that the Cambridge Seven is the architect who designed most of the aquariums in Baltimore and New England. They are also the architect of the interior design for the Four Seasons Hotel, with Jim Cortina doing the technology.

Collaborating with Other Organizations

Paul and Henry started collaborating with other organizations for the Vue Orleans, a big part of their start. They didn’t want it to be a museum but more of a collaboration that had the aspects of the other organization’s collections. One of the visions for the project was to have items from the New Orleans Historic Collection be available to the people and have them touch and see in 3D.

No human culture is inaccessible to someone who makes the effort to understand to learn to inhabit another world.

Go into the historic New Orleans Collections or others. You will find that certain people in the city are historians that study a particular portion of the city’s history. Paul and Henry were able to benefit from that by getting their research. The information gathered helped put together the project and Dr. Gates and Dr. Powell’s help.

It is important to understand that museums, archives, and collections are all struggling with major financial concerns. It’s important to give back by utilizing those cherished resources and making sure they’re part of that financial screen because if not, they will go out of business. It’s not because of the material’s substance but because they don’t have a financial share of resources.

The Challenge of Preserving the Former World Trade Center

Paul says it was challenging to preserve and convert the Former World Trade Center into the Four Seasons Hotel. Locals felt that it was their building because of the many people engaged. Many people used to work or had relatives that worked in the Former World Trade Center, so it was very important to the city of New Orleans. It was built when technology wasn’t as efficient as it is today. The building had to be reinforced, and some differential settlements in it had to be corrected. Exterior panels and windows needed to be refurbished and replaced.

Dream companions on a Long-haul Flight

Henry says that on a long flight, he would want to sit next to Henriette DeLille because of the light she led in what she meant to education and health in the city of New Orleans in uniform. Paul would like to take a long-distance trip with Henry Louis Gates. Paul wants to look at someone he respects and admires and has the chance to work with. Gates is someone that fascinates Paul with the stories and the history that he has.

The former World Trade Center is a building that has been sitting vacant for a long time. It is a modern skyscraper that had come to dominate the skyline of New Orleans until some taller buildings came along. Now rebuilt into the Four Seasons Hotel, it is a wonderful example of what people can do to create mixed-use inside out of an old building. Once, an office building has taken the life of a residence and hotel.