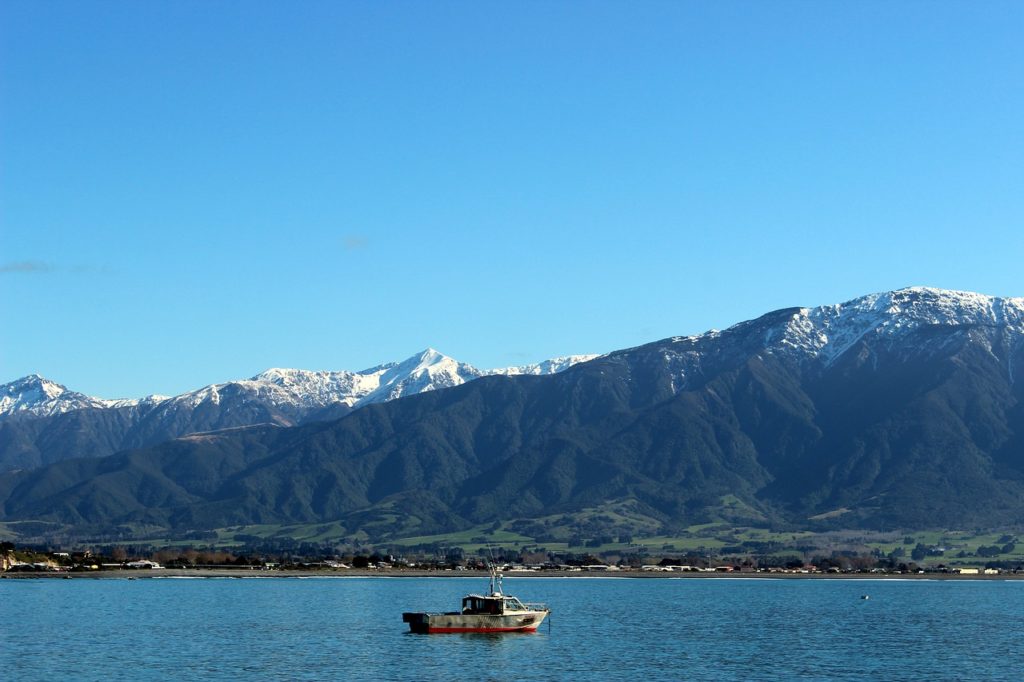 New Zealand is one of the most wildlife saturated tourist destinations in the world, with an abundance of native flora and fauna. Most notable is Kaikoura, on the South Island’s East Coast, which has always been ‘The Place’ for marine mammals and amazing birdlife. But an earthquake in 2016 risked taking it all away. So what saved this hub of wildlife? The heart of the community.

Kaikoura is a town of 4,000 people located about 110 miles north of Christchurch, on New Zealand’s South Island. It is tucked away on a beautiful peninsula, backed by the snow-capped peaks of the Seaward Kaikoura Range. The natural curve of the cove means that it is nestled away from the hustle-and-bustle of big city life. Kaikoura feels like that secret treasure you find on a road trip. You don’t want to stay too long in case your very presence breaks the magic, yet, you can’t resist coming back again and again, to dip your toes in its wonder.

The location appeals to the marine life as much as it does to humans. Due to upswelling ocean currents and the continental shelf, Kaikoura receives an abundance of rich nutrients from the ocean floor, creating a prized feeding zone for many different species. From dusky dolphins to New Zealand fur seals, many animals have made ‘nurseries’ for their young and return here every year to grow their families. The destination offers the perfect balance between tourist-ideal and ‘safari destination.’

In 2016, Kaikoura experienced an earthquake that changed everything. The earthquake started about 37 miles southwest of Kaikoura, measuring 7.8 on the Richter scale. New Zealand is prone to earthquakes and is constantly developing better technology and prevention measures; however, the Kaikoura Earthquake was the second largest in New Zealand’s European-settlement history. All major roads were closed and the railway was simply broken. In the small town of Kaikoura, dependent on tourism and its wildlife, many worried the community would not be able to recover.

One of the immediate concerns was the impact on the wildlife nurseries; in particular, the New Zealand fur seal nursery located slightly inland of Ohau Point, just north of Kaikoura. Prior to the earthquake, Ohau Point offered two stunning vantage points for seal watching. On the ocean side of the road was a huge rock outcrop, where the larger seals could be seen lazing about and basking in the sun. The area was big enough for campervans to stop for lunch, dinner, and even an overnight ‘freedom-camping’ spot. Visitors could easily watch the seal colony do their seal thing while keeping a respectful distance.

Alternatively, younger seals could be seen shuffling across the road and making their way upstream to the waterfalls hidden in the bushland. Between April and September, seal pups would play in the waterfall and swim in the stream, before heading back to the colony for food and company.

When the earthquake hit, local tour operators worked with conservation groups to check on vulnerable areas, including the Ohau Point seal colony. The first thing they saw was the physical rubble across the road and the rocky outcrop. Access to the waterfall area had been completely cut-off. Survey groups were relieved to find no seal pups were injured or trapped by the damaged environment but the relief was short-lived. With only weeks before the start of the pupping season, concern turned to worry about the welfare of the seals and other marine mammals in the area. The wildlife attracts many tourists to the town but for the locals, the animals are like neighbors and friends. They feared future loss of the seals. The people of Kaikoura knew what they had to do: they banded together to rebuild.

The earthquake was also devastating for the people of Kaikoura. Two people died and many were hurt by the damage both during and after the earthquake. Returning to ‘business as usual’ was essential for them to survive in this isolated town but it could not, would not be at the expense of the wildlife and the environment.

The first goal was to rebuild and re-open the main road to Kaikoura, State Highway 1. The New Zealand government worked closely with the Kaikoura community initially, to provide alternate routes for provisions and support. While rebuilding the main road, the government also worked closely with residents and businesses to protect the interests of both the people and the wildlife. When sea walls were built, wildlife specialists were consulted to ensure the most natural environment was maintained. When seals needed to be relocated, all government employees were trained in the correct way to collect and move seals. Local businesses worked with conservation groups to survey previous colony sites and assess new sites created by the upshift from the earthquake.

Not everything has been smooth sailing. Following the earthquake, the National Water and Atmospheric Research Group (NIWA)  maintained close monitoring of the Kaikoura Canyon system, a submarine canyon located southwest of the Kaikoura peninsula. The earthquake devastated the Canyon, effectively smothering the seafloor and the abundant ecosystem providing for the marine wildlife. After careful consultation with local fisheries, conservation groups, and tour operators, the New Zealand government implemented strong fishing restrictions, still in place to this day. It was a decision the community supported, and it has been almost unanimously complied with because everyone agrees that protecting the marine ecosystem is important. The restrictions have paid off. Recent surveys by the NIWA have shown recovery along the seabed.

Is Kaikoura Open For Tourists?

Two years after the earthquake, Kaikoura is once again a hub of marine life and tourists. The combined efforts of tourism operators, conservation groups, government departments, and locals have led to growth in both the business and community spirit. The ‘observe and learn’ approach has benefited the town as they watch the animals adjust to changes in their habitats. The importance of the environment and the community is as much a part of the tourism package as the customers and their stories. Local operators know this; ‘responsible travel’ has now become an integral part of every tourist experience offered.

Magical marine encounters are still possible in Kaikoura, especially the opportunity to swim with dusky dolphins and sleek seals. Seeing these magnificent creatures in their natural environments is breathtaking. It is a rare chance to interact and share the same space with them. This intimate experience fosters a sense of responsibility to protect and aid in the recovery of the whole region. When joining the playful dolphins in the water it seems we are as much entertainment for them as they are to us. Perhaps they are studying our recovery from the earthquake too.