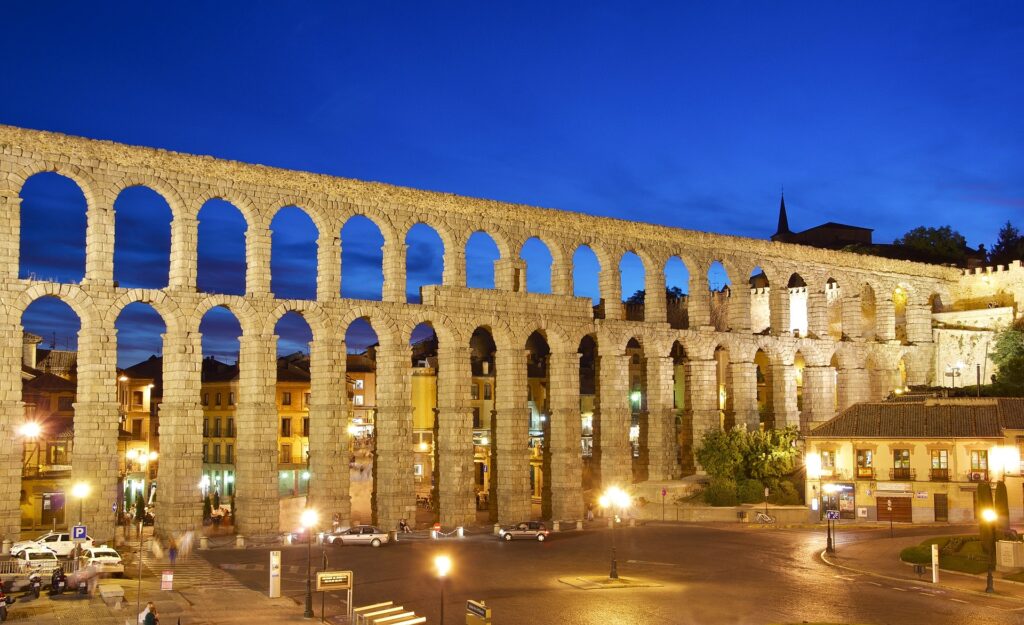 The Iberian Peninsula is the home of present day Spain. This geographically rich area, with mountains, beaches, and plains has been conquered many times over throughout history. One of empires that revolutionized the infrastructure of the area was none other than the infamous Roman Empire.

They brought their engineering feats of knowledge, language, culture, and political systems to the Iberian Peninsula. Thousands of years later, many of their most astounding ancient monuments in Spain are still standing, thanks to the amazing craftsmanship of the Romans.

With the 600 years they spent occupying the region, called Hispania at the time, from 218 BC to AD 409, the Romans irreversibly changed Spain. Read more to learn about the best Roman structures in Spain as well as their cultural mark on the region.

Changes in Culture and Science

The Romans were one of the advanced civilizations during antiquity. They made discoveries in agriculture, engineering, architecture, warfare and more before other civilizations in Europe. This is why they were unstoppable at their peak.

They brought this knowledge and education to the Iberian Peninsula and helped it thrive. After they invaded and occupied cities, they made improvements to their infrastructure. They brought their irrigation techniques to the city that greatly increased the harvests of wine, wheat, and olives.

The Romans knew the rich soil of Iberia could help their civilization grow. To make transportation and exporting easier, they constructed 34 major roads that spanned more than 20,000 kilometers. This remained the best roads in the area for more than a thousand years.

Spanish is a Romance language, based from Latin which the Romans brought to the region. Spanish, Portuguese, and every regional language of Spain (except for Basque) has Latin roots.

The Roman Theatre at Mérida

Mérida was a very important Roman city. Located in Spain’s Extremadura region bordering Portugal, the city was called Emerita Augusta, after Emperor Agustus. His son-in-law Vipsanius Agrippa oversaw its construction in 16 BC.

The theatre is built in the typical Roman style and ingeniously used the natural landscape to its advantage. Its location was chosen on the slope of the hills, where natural acoustics made it easy for the 6,000 spectators to understand what the orators were saying.

The theatre was eventually abandoned in late Antiquity. Dirt and vegetation covered the neglected theatre, and only the very top was visible. It was eventually excavated carefully in 1933. Amazingly, the theatre remained in excellent condition and is one of the best preserved Roman structures in Spain.

An elevated platform is backed by beautiful marble Corinthian columns. They hold up a decorated cornice. Statues of goddesses from the area have been moved to the nearby National Museum of Roman Art.

The theatre is part of a larger entertainment center. Next to the theater there was an amphitheatre where much more popular spectacles took place. The general public liked to watch the fast-paced chariot races and gruesome gladiator competitions there. The theatre was mostly built to show the empire’s wealth and austerity and wasn’t as popular with citizens.

One of the best examples of Roman structures is the magnificent Aqueduct of Segovia, in Spain’s Castilla y Leon region. Built in 98 AD, the stunning Aqueduct of Segovia brought water from the River Frio in the nearby mountains to the city. The water traveled 15 kilometers (9 miles) before reaching the city. During Roman times, the aqueduct featured an image of Hercules, believed to be the founder of Segovia. Now it features the Virgin Mary.

The aqueduct stands as tall as 28.5 meters tall and towers over downtown Segovia. There is nothing holding the stones in place, the aqueduct was built with unmortared, brick-like granite blocks. Its 44 double arches make the height possible. This is proof of how truly ingenious Roman engineering was. Centuries after the fall of the Roman empire, the aqueduct remained in use, working as well as ever and making the arid valleys farmable and allowing the city to continue to grow.

Now, 2,000 years later it is still standing and only modern pollution and erosion threaten it. The aqueduct continued to bring water to the area until the mid 19th century. This area of Spain was only as populated and as fertile as it was due to the Romans.

In Spain’s southern Andalusian region, the Roman Bridge of Cordoba stands out for its beauty. This arched bridge was originally built by the Romans in the 1st century BC. It crosses the  Guadalquivir River. The bridge works so well that another bridge in the city wasn’t built until the mid 20th century. After a modern bridge was built, the Roman Bridge became pedestrian and bicycle-only.

Cordoba was occupied by the Moors for centuries. They reconstructed the bridge in the 8th century in a typical Moorish style. Over the centuries, the bridge has been restored many times. Now, only the 14th and 15th arches are still original to the first Roman bridge.

The Romans occupied the Iberan Peninsula all the way to its most northwestern tip. In the current day region of Galicia, the Romans built over 2 kilometers of fortified wall nearly surrounding the ancient city of Lucus Augusti, now called Lugo.

Built in the 3rd century to protect against Germanic invaders, the walls are still mostly intact. At their tallest sections, the walls reach as high as 15 meters (49 feet). There are five original Roman gates with 5 more added later. Forty-nine of the wall’s original towers still survive. A moat originally surrounded the walls, adding to the complex fortifications designed by the Romans.

Now, this is a popular attraction for tourists and one of the best Roman fortifications still standing. In fact, it is the only city in the world to still be completely surrounded by Roman walls.  A walkway allows tourists to travel across the entirety of the walls.

The city is also home to the Roman bridge of Lugo. This arched stone bridge has been restored many times and crosses the Minho river.

Lovers of ancient history might be first drawn to Athens and Rome, but Spain shouldn’t be overlooked. This special part of western Europe has been shaped by many civilizations to become what it is today. Although these ideas were first introduced two thousand years ago, their mark is still visible in the modern Western world. Visit these Roman structures to learn a bit more about the past while illuminating the present.