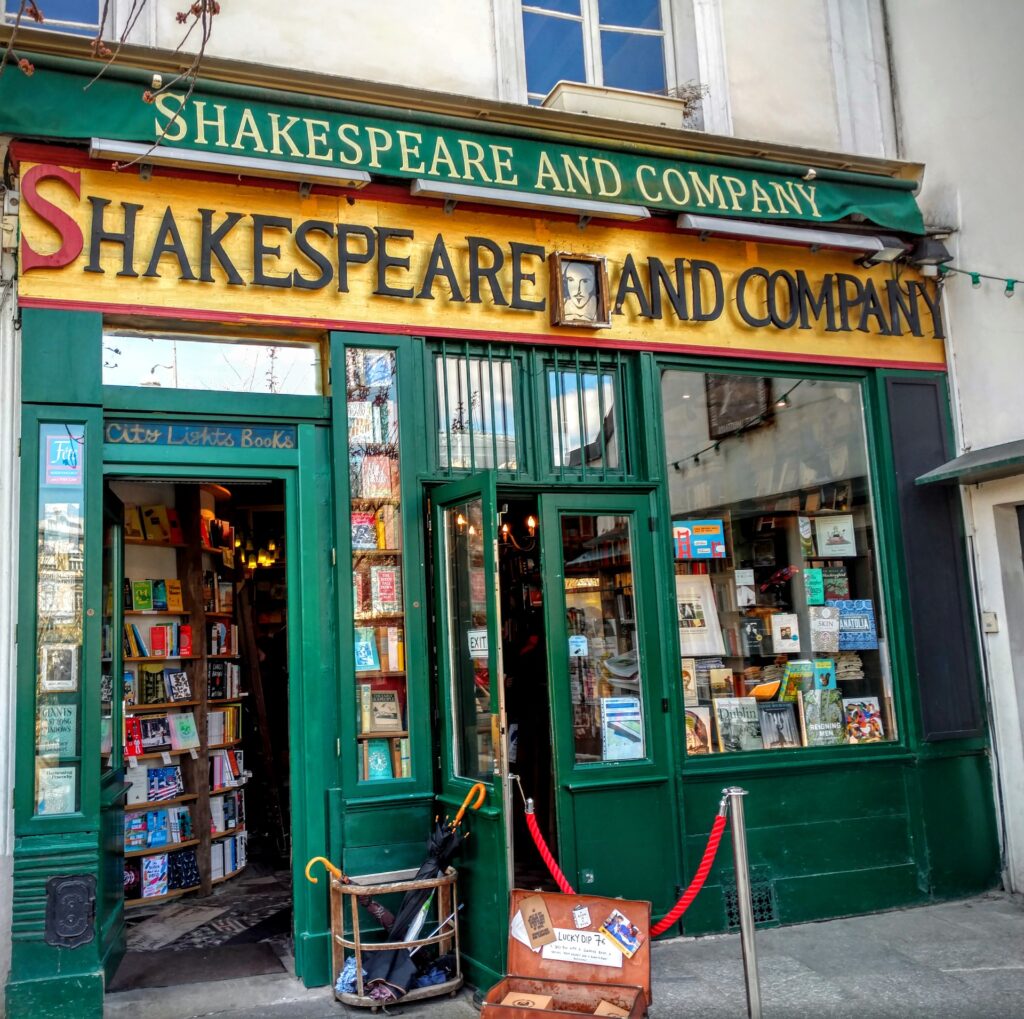 The delightfully caramelized, nutty smell of freshly-roasted coffee drifts up from the café below. It mingles with the slightly mildewed smell of the upper-storey room of this 17th-century building. A few visitors silently navigate their way through the small room filled with books, stacked on rows after rows of archaic shelves built deep into the walls.

It is a lazy Sunday morning. A quiet stroll through the stretch of Rue de la Bûcherie has led me up here at Shakespeare and Company, arguably the most famous independent bookstore in the world, a literary institution that began its journey in 1919. Sylvia Beach, one of the leading expat figures of Paris in the first half of the 20th century, had started this as a small lending library at Rue Dupuytren, before she moved it to larger premises at Rue l’Odeon in 1922.

The earliest subscribers would find a humble assortment of magazines and books that included contemporary works of English literature by T.S. Eliot, James Joyce and Ezra Pound, without a catalogue or any index. The informality set the tone for an atmosphere that would soon turn Shakespeare and Company, as Noel Riley Fitch put it, a “meeting place, clubhouse, post office, money exchange, and reading room for the famous and soon-to-be famous.” It became a regular haunt for Lost Generation writers such as Ernest Hemingway, F. Scott Fitzgerald and James Joyce. When Britain and United States declared Ulysses indecent, Beach came forward to publish James Joyce’s magnum opus in its complete form for the first time. The publication brought global fame to the author and Shakespeare and Company, triggering off a surge of innovative publishing of the works of the regulars of the bookstore. It helped shape up the literary careers of Ernest Hemingway, Ezra Pound and E.E. Cummins.

In the 1920s and 30s, Shakespeare and Company was a hotbed of the avant-garde of the Left Bank, Paris’ thinking quarters. Hemingway would come over for a joint book reading with Stephen Spender or a spurring session with Ezra Pound. Surrealists like Man Ray would defend their movement against its detractors over steaming cups of coffee. Literary magazines would use the bookshop as their editorial address. And along the way, Sylvia Beach would play the mother hen to the slew of writers. Ernest Hemingway would later write of her in A Moveable Feast, a delectable memoir of his Paris days: “No one I ever knew was nicer to me.”

The summer of 1941 changed all of this. The bookstore closed its shutters in Nazi-occupied Paris. The story goes that Sylvia Beach flatly refused to sell the last copy of Joyce’s Finnegans Wake to a German officer, who threatened to come back and confiscate her books. She immediately packed up her books and closed the bookstore. After the war was over, Hemingway would try to reopen Stratford-on-Odeon (as the bookstore was lovingly nicknamed), but never succeeded.

Ten years later, George Whitman, an American ex-serviceman, would open a bookstore on Rue de la Bucherie. An ardent bibliophile, Whitman named the store Le Mistral. In a few years, much like Shakespeare and Company, it would become a centrepiece of bohemian Paris and the celebrated haunt of Beat Generation writers like Allen Ginsberg, Jack Kerouac, William Burroughs and Gregory Corso. Burroughs made the bookshop his base to research portions of his cult novel Naked Lunch from Whitman’s collection of medical textbooks. Whitman wanted to continue from where Beach had left off. A delighted Sylvia named Whitman her ‘spiritual successor’ and bequeathed the rights to the name ‘Shakespeare and Company’ to the young American. In 1964, two years after Sylvia’s death and on the 400th anniversary of Shakespeare’s birth, Whitman would rename Le Mistral as Shakespeare and Company. He called his bookstore “a novel in three words.”

While Beach offered mentorship, access to free books, and sometimes financial assistance to the young, brilliant and often cash-strapped aspirants of the interwar years, Whitman carried it one step ahead. Shakespeare and Company, according to him, was “a socialist utopia masquerading as a bookshop,” where he created a haven for young and struggling writers and creatives from across the globe. They could find a home here and crash into the tiny beds tucked between the shelves and alcoves. All for a few hours of work in assisting the store’s daily affairs; with a clause that they have to read a book a day and write a one-page autobiography for the shop’s archives. Whitman referred to them as “tumbleweeds” that “blow in and out on the winds of chance.” It’s a legacy that Whitman’s daughter Sylvia (who was named after the original owner) and her husband David have lovingly continued after George’s death in 2011. It is estimated that around thirty thousand tumbleweeds have been hosted in this Left Bank establishment to date.

As I glide in and out of the second-floor rooms, through the cluttered charm of the place strewn with musty stacks and rickety old chairs, I bump into Francis. A young Spaniard, Francis is a tumbleweed. Having made the store his base for a couple of weeks, he wants to start a novella from here. He guides me to one of the store’s hidden gems — a collection of first editions from the 1920s and 1930s, before he goes back to the sales counter for his shift.

I forage some more through the shelves that are a heady mix of recent works of Anglo-American writing, Paris-themed journals and antiquarian literary treasures. It is a treasure hunt of sorts where I bag a couple of old copies of The Paris Review and a 1979 edition of Little Birds by Anais Nin. As I prepare to leave with my day’s catch, I catch sight of a large-print message pinned on the wall: “Be not inhospitable to strangers, lest they be angels in disguise.”

I wind my way down the wooden stairs, past a well-worn piano, and out into the breezy Parisian afternoon. I park myself in the café next door for a leisurely café au lait and a lemon pie, while eyeing the bargain bookracks neatly kept on the sidewalk and the majestic elegance of Notre Dame Cathedral, just across the Seine.