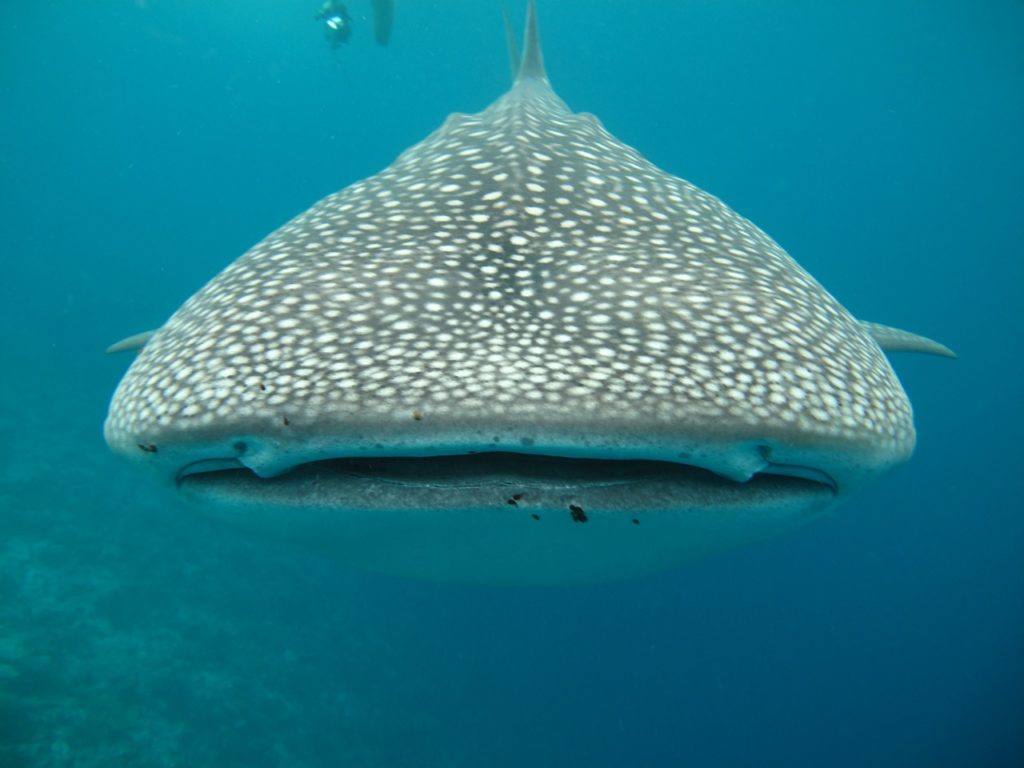 Swimming with whale sharks was something I had never contemplated until visiting La Paz, Mexico, a few hours north of Cabo San Lucas in southern Baja California Sur. My immediate response was “no way” until I learned the name “whale shark” is quite misleading. Whale sharks are the world’s largest fish and are not known to nibble on humans. These gentle giants filter plankton and fish from the top of the ocean like a baleen whale and eat eight percent of their body weight per week. After extensive online research, I soon realized that I couldn’t pass up the opportunity to swim with this misunderstood creature that scientists just started studying in the 1950s.

Donning a wetsuit with some sort of swimmable life jacket plus a mask, snorkel, and fins, I dangled off the side of our small boat that comfortably carried about six. Our crew of ladies already gleefully screamed for joy at the site of morning dolphins swarming our boat on the way out to sea, riding our wake and following us out from shore in the clear greenish-aqua Sea of Cortez.

But now here I was – the only one showing any signs of fear about to jump in to swim towards a creature that could grow over five times my length and fit a washing machine inside its mouth. The group decided I should go first since I was the most apprehensive. Our knowledgeable, passionate guide Dorian from On Board Baja had already eased my anxiety by telling me he would hold my hand while we swam – Ha! As he waited off the side of the boat, I made my splash realizing there was no turning back now.

Once in, I soon learned how swiftly I needed to swim to keep up with the juvenile who was longer than my five-foot six-inch human body. Moving my legs rapidly and propelling myself even farther with my arms, I could keep up near the whale shark’s tiny eye and admire this white spotted beauty with small feeder fish clinging around its face.

I kept up for some time, just me silently gliding next to the whale shark with the guide on the outside, feeling for a moment in time the gracefulness of being near such a captivating carpet shark. As I flowed next to this vulnerable fish, it felt for a moment like our eyes locked and instantly I could see how humans would want to continue this dream-like spiritual connection. Could the whale shark hear my own hard breathing and was he at all curious of us, as we were of him? La Paz means “peace” and that’s exactly what I felt.

As I propelled myself through the sea next to this flat-faced dotted beauty that can live from 80 to 100 years, I remembered not to swim too close or near its tail, as I learned from our expert guide that touching them could be harmful and their powerful tail could harm us (even though they swim by moving their bodies – not their tails).

The second whale shark was spotted by its dark shadow from the higher canvas rooftop of the boat. This whale shark was over 20 feet, so over three times the size of me. Typically, juveniles are spotted in La Paz, Mexico, which can grow anywhere from five feet to 20 feet long. Not wanting to miss this opportunity, I was alerted to jump in. Swimming with all my might, biting hard on my snorkel apparatus, I finally was adjacent to this majestic massive ocean cruiser but this time after several minutes I had to stop in the middle of the sea, hyperventilating from exhaustion.

Then, upon the whale shark’s turn or circle, I was ready. This second attempt to float alongside the docile speed racer ended eventually when the flattened-head beast turned course and ran right into my face – and there I was, face to face with the world’s largest living fish. The whale shark may have been just as startled as me as I jumped back a foot, let out a scream, and the giant creature dove down to the deep.

La Paz, Mexico is now one of the best places to experience whale sharks.

In the last five years, more whale sharks continue to come consistently to the shores of La Paz, to one area or zone that the Mexican government allows boats to enter. Seasonal north winds push whale shark food into the Bay of La Paz, where it collects just off the narrow band of dunes and mangroves known locally as El Mogote. Thus, the whale sharks congregate in this area, just a 20-minute boat ride from La Paz. To protect the whale shark species and not ruin this type of shark tourism, swimming with whale sharks is highly regulated in La Paz, whereas in other areas around the world there are no rules and restrictions and it takes hours by boat to find the whale sharks.

The Mexican government is taking great care to protect the species to make sure trips are safe with minimum impact. They want to declare the whale shark area a protected place. Since 2018, government agencies, researchers, and local service providers began meeting to craft a management plan for responsible observation of whale sharks. RED’s nonprofit arm called Red de Turismo Sustentable AC works to build awareness and support for the management program through its Whale Shark Ambassadors program. In the La Paz Bay, official rules include a ban on scuba diving with whale sharks (only snorkeling) and flash photography and physical contact with the animals is prohibited. Currently, only 14 licensed boats are permitted at a time in the 10-kilometer square zone and even we were instructed to put on our wrist bands upon departure because someone was checking from the docks. Only one boat is allowed to approach any whale shark at a time, and boats are prohibited from approaching whale sharks head-on.

This jaunt into the Sea of Cortez is pure magic. Humans are curious beings, but we need to be careful and respectful. To help protect these majestic creatures, our guide informed us that hitting a whale shark on an unlicensed boat could incur a 90,000 peso fine. Also, with the increase of shark tourism, a maximum of five swimmers with one guide are allowed in the water at a time with the animals and boats are required to stay 15 feet or more away from a whale shark. When in the water, swimmers must remain three feet away from the body of the animal, or 10 feet away from the tail.

Also, there are three daily spots for boats to take guests swimming with whale sharks at certain times – 9 am, 12 pm and 3 pm. These spots are operated on a first-come, first-served basis and the tour guides must ask if they are able to enter the water as there is a limited number of boats allowed in the area at a time.

Whale shark season in La Paz starts in October, but seems to peak in February with 70 seen in La Paz last year. What sets La Paz, Mexico apart from other destinations is their recognition of whale sharks as a threatened species and their focus and commitment to responsible whale shark tourism. And one thing is certain, the visual of coming face to face with a whale shark, will be with me for the rest of my life.

This experience was provided by On Board Baja. 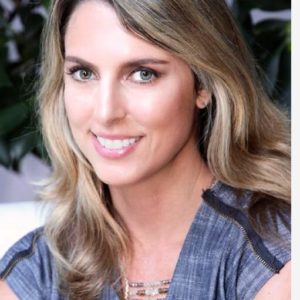 Melissa Curtin is a Connecticut girl madly in love with Los Angeles. She is the co-founder of LaLaScoop, an online hub sharing the beauty and vibrancy of LA life. As an educator and travel writer, her passion for globetrotting and learning about new cultures was fueled when she traveled around the world at age 20 on Semester at Sea. Since 2012 she has been documenting her adventures for a variety of publications both online and in print.