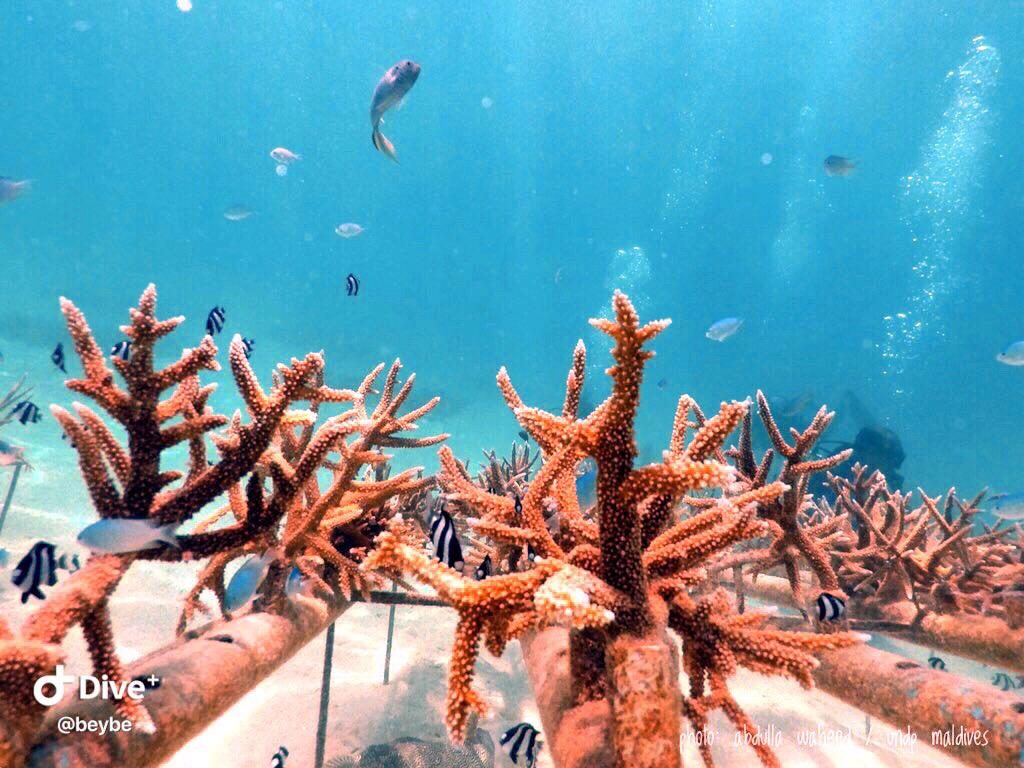 The Maldives islands are home to more than a thousand coral reefs, vibrant ecosystems that provide a home for marine life. The coral reefs of the Maldives’ 26 atolls offer striking underwater exhibitions of colorful fish and oddly-shaped fauna to holidaymakers who visit this stunning destination. However, in recent years, the coral has suffered from extensive bleaching, affecting between 60 and 90 percent of the Maldives’ coral reefs. This natural disaster has exposed the vulnerabilities these islands face in the midst of climate change.

Local NGO, Save The Beach Maldives, is at the forefront of protecting these coral reefs from more destruction. Since 2012, the organization has been running coral rehabilitation programs in the Maldives’ reefs, starting with the island of Vilingili. In collaboration with eco-tourism company Secret Paradise Maldives, Save The Beach welcomes guests to take part in a marine conservation tour. During the tour, guests meet local ocean conservationist, Beybe, and learn about the ocean’s ecosystems, as well as conservation challenges and solutions arising from coastal development and waste management.

Save The Beach’s Ocean Conservationist Beybe

The tour begins with an introduction to Beybe, a remarkable man with a passion for saving our seas. Having grown up in the Maldives, Beybe remembers a time when the reefs were thriving. Sadly, in 2014, the El Niño climate cycle triggered the worst coral bleaching events on record. The reefs were affected again in 2016 by El Niño.

Beybe talked to me about the events that occurred and the importance of coral conservation. He explained that coral bleaching occurs when water temperatures become too warm. Coral expel the algae living in their tissues, causing the coral to lose color and turn white. After this, coral has a much lower chance of survival resulting in habitat and food loss for an abundance of marine life.

El Niño is not the only culprit at play, Beybe explained. Carbon pollution, caused by human overconsumption, is warming the oceans to critical levels. Save The Beach Maldives was founded to educate the local community about the importance of protecting our oceans. What started as a youth movement to conserve the beaches in Vilingili, is now a nationwide program that involves coral rehabilitation, waste management, plastic reduction, beach clean-ups and scientific research programs investigating the Maldives’ ecosystems.

We walked to the shore of the Vilingili beach. Beybe handed me snorkeling gear. The beach sits on a small stretch of coastline directly opposite the Maldives’ capital of Malé, one of the most densely populated islands in the world. Beybe pointed out Malé’s neighboring island, a trash island home to the population’s landfill. Smoke emitted from the piles of trash, releasing harsh chemicals such as hydrochloric acid and sulfur dioxide into the atmosphere. Ironically, the act of burning trash is one of the things contributing to climate change, but these remote islands in the middle of the Indian Ocean have no other form of waste disposal. Committed to ending the excessive generation of waste, Save The Beach has launched a number of waste management initiatives in local schools on Vilingili and throughout the Maldives. The organization has also lobbied for the protection of the beaches and reefs in the Maldives.

I put on my snorkel and flippers and step into the calm, blue water. I follow Beybe out towards the reef. As we approached the drop-off, I noticed checker-like bars on the floor of the ocean. Small pieces of coral sat atop them arranged in parallel lines. Some of the coral were brain-like; others looked like tree branches. The ocean floor resembled an underwater veggie patch, flaunting a range of different shapes and colors.

Beybe free-dived down to take a closer look. I floated at the top of the ocean and watched as he swept away what appeared to be algae from some of the corals. I later learned this is an important part of the cleaning process. The first 30 days after coral is planted is when it is most vulnerable. Beybe explained that during these first 30 days, the reefs have to be checked and cleaned daily. After this period, the coral needs to be checked only once every 3 to 4 days. Beybe leads a team of volunteers who regularly help him monitor the reefs, clean them and record their growth. Some coral has reported a growth of 30 centimeters in 18 months. It might not seem like much, but a 30-centimeter coral will provide shelter and food to herbivorous fish, playing a vital role in the ocean’s ecosystem.

Save The Beach’s Reef Work

The Vilingili coral rehabilitation project is not the only of its kind in the Maldives. Save The Beach has worked with five separate reefs throughout the region, with plans for more in the pipeline. The process for rehabilitation is first to monitor the waters, understand the currents and the water temperatures. The next step involves finding broken pieces of coral, removing the algae or dead coral and retrieving the live part. The live piece of coral is then planted strategically amongst other pieces of coral, similar to the way we would plant seeds in a garden.

I watched in wonder as Beybe nurtured these underwater plants. Before participating in the tour, I had never known the extent of coral’s role in the ocean, or that we can plant coral similar to the way we plant trees. Beybe and his team bring a wealth of scientific knowledge to this work. His passion shines through in every word he speaks.

We can learn about the effect climate change is having on our planet by learning from the experiences of vulnerable island nations like the Maldives. What Save The Beach is achieving is vital to the future of our oceans. As Beybe explained, 50 percent of the oxygen we breath comes from the oceans; the ocean is our life source.

You can visit Beybe and his team on the island of Vilingili, a 10-minute ferry ride from Malé.

2 thoughts on “The Coral Rehabilitation Project Reviving the Maldives Reefs”