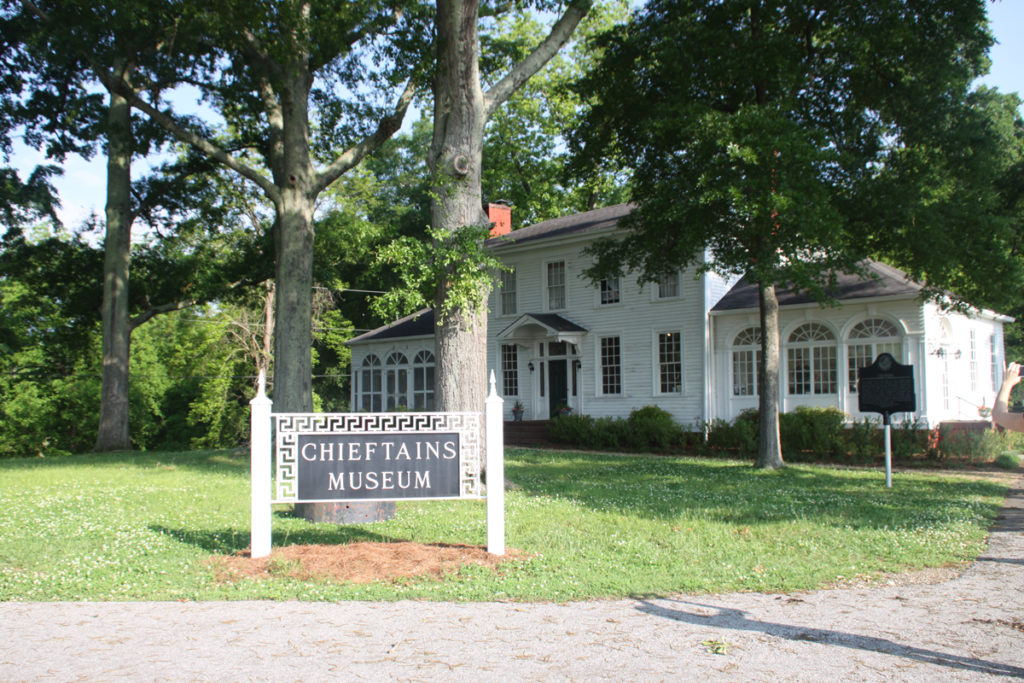 The rich culture and heritage of the Cherokee people and the story of their forced removal from their homeland is sometimes lost amid undifferentiated accounts of indigenous people in the United States. Three stops along the Georgia section of the Trail of Tears, a National Park Service site that documents the Cherokee journey, will dispel any ignorance about their distinctive history.

The first stop is former Cherokee Chief Major Ridge’s home in Rome, Georgia. Originally named “Ca-nung-da-cla-geh,” which roughly translated to “ridge,” the Cherokee chief gained the first name of “Major” during the War of 1812. He fought with Andrew Jackson against the Creeks, a Native American tribe who had allied with the English. For his bravery at the Battle of Horseshoe Bend, Jackson raised him to the rank of major and he took it as his first name.

His home, now Chieftains Museum, shows his personal life as well as his political life. Ridge was a prominent member of the Cherokee Nation, who served as the equivalent of Speaker of the House. He helped create the Cherokee Nation’s three-tier system of government similar to the United States’ three branches. He helped pass the Cherokee General Council law in 1829 that demanded the death penalty for any Cherokee who sold tribal lands.

The Treaty of New Echota

The state of Georgia, looking to suppress the Cherokee government, circumvented the law by holding a lottery giving Cherokee land to white settlers. Facing the near-certain loss of his tribe’s land, Ridge signed the Treaty of New Echota in 1835, which sold all the Cherokee’s tribal land to the United States in exchange for land in Oklahoma. The Cherokees’ forced journey between those two destinations became known as the Trail of Tears.

Ridge saw the treaty as the only way to gain replacement land but he is said to have recognized its cost. “I have just signed my death warrant,” he reportedly said after signing it. And he was correct. Ridge, his son John, and his nephew, Elias Boudinot, who all also signed, were later assassinated by Cherokees as enforcement of the law Ridge had previously passed.

At first glance, with its gracious two-story clapboard exterior, Chieftains Museum seems to be a typical Southern Plantation home. The home started as a two-story dogtrot log cabin when Ridge and his family moved there in about 1819. A section of the wall is removed to show the structure of the original cabin. Ridge and his son added to it to make it into the mansion on display today. The home is furnished as it was in Ridge’s time. Inside are sketches of how the original log cabin was transformed. Artifacts, such as silverware, dishes, and tools, uncovered during archeological digs on the grounds are also displayed inside the home.

The museum also houses documents tracing Major Ridge’s family in later years. His grandson, John Rollin Ridge, was the first Native American novelist and poet. His book about a Mexican bandit was the basis for the television character, Zorro. He was also a journalist and the Sacramento Bee newspaper’s first editor.

The Cherokee Capital of New Echota

New Echota, the Cherokee Capital where the treaty was signed, is considered the start of the actual Cherokee journey along the Trail of Tears.

New Echota, which has 12 buildings, including two original and ten reproductions, offers a glimpse into the life of a highly civilized, educated people with a system of government very similar to the United States system. Park buildings include several Cherokee government buildings, a reconstructed Council House, and Supreme Court.

The most significant building in the park is the reconstructed Cherokee Newspaper office building, The Phoenix. Inside there is a printing press like the one used to print the newspaper. The Cherokee were the only Native American tribe to develop a written language. The Phoenix was published in English and Cherokee with the first edition printed on February 21, 1828. Elias Boudinot, Major Ridge’s nephew, was the first editor.

One of the original buildings in New Echota is Vann’s Tavern, which was moved to the site. It was owned by a prominent Cherokee named James Vann. The tavern is a timber frame two-story building. Downstairs there is a rugged wood table and benches where customers would have eaten food cooked on the open fireplace. It also has a counter where grain, tobacco and other items for travelers would have been for sale. Those spending the night at the Tavern would have slept upstairs.

The only building original to the site is Samuel Worchester’s house. Worchester was a white missionary and college friend of Boudinot’s. Georgia passed laws forbidding white people to live on “Indian” land, which led to Worchester’s arrest. He served more than a year in jail for his offense. After his release, he followed his friends to Oklahoma during the removal.

Another stop on the National Historic Trail, which includes sites outside of the physical path the Cherokees took to Oklahoma, is Chief Vann’s home in Chatsworth. It is considered “the showplace of the Cherokee Nation.” When Cherokee Chief James Vann, who was the wealthiest man in the Cherokee nation, decided to build his home, he wanted to show the world the Cherokee was the equal of the white man.

He built the first brick house owned by a Cherokee, a two-and-a-half story building that combined Federal and Georgian styles. The first two floors have 12 foot high ceilings. His home design was influenced by Moravians, whom he’d brought to teach in Cherokee schools. One Moravian influence is visible in the doors, which are known as “Christian Doors” because they feature a design of a cross and an open Bible.

The home was completed in 1804 and James Vann lived in it for five years, until he was killed at one of his taverns in 1809. He left his home to his favorite son, Joseph, known as Rich Joe Vann.

Rich Joe added wood work and the most spectacular feature of the home, its floating staircase. The landing of the staircase appears to float over the first floor hall with no visible support. It is one of the oldest examples of cantilevered construction in the state.

Despite Rich Joe’s money and connections— President James Monroe spent the night in the home in 1819—Georgia evicted Rich Joe and seized his home. Eventually, Vann received a small compensation from the government for the loss of his property.

The Trail of Tears National Historic Trail also passes through parts of North Carolina, Alabama, Tennessee, Arkansas, Illinois, Kentucky and Missouri before its final destination in Oklahoma. The many sites tell the story of the Cherokee removal from their land and homes and their forced march to Oklahoma, a journey that resulted in the death of over 4,000 Cherokee.