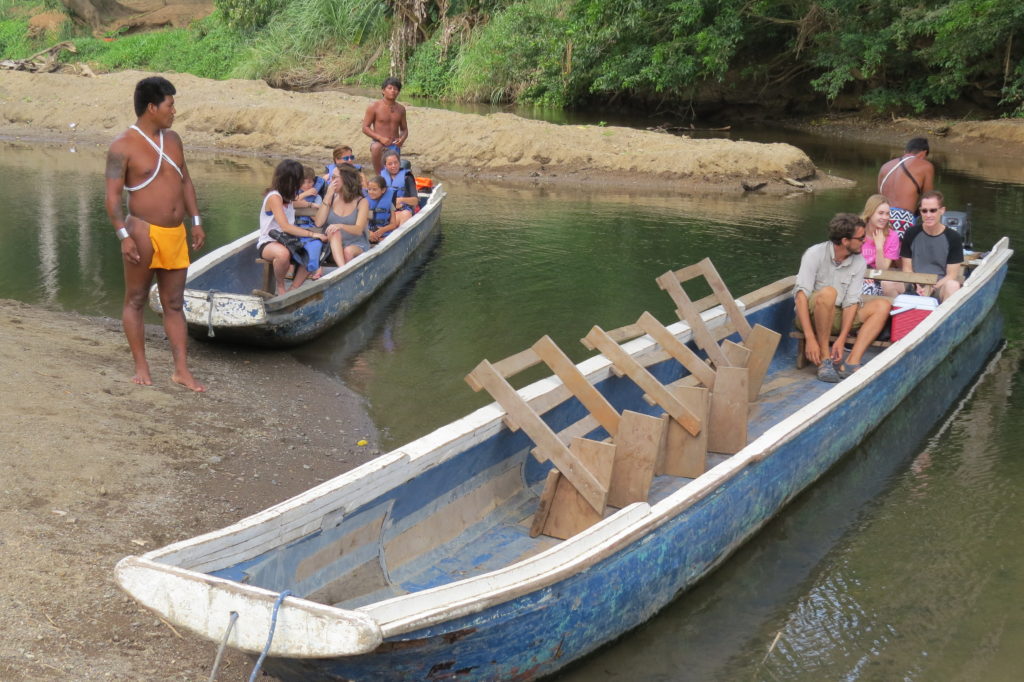 Our wooden longboat plied the Chagres River deeper and deeper into the Panamanian rain forest. Soon the boatmen, one wearing a loincloth and the other a beaded skirt, were poling us through channels so narrow that it looked like the river had disappeared. We pushed on through the jungle growth draped over the river, ducking into the boat to avoid being hit by the brush.

Our family’s boat eventually emerged into a clearing, a broad lake filled with lily pads, a few traditional piragua dugout canoes, egrets and kingfishers, and the screech of nearby monkeys. Here we restarted the motor, which took us across the lake to the shoreside town of Embera Quera.

The Embera people originate from both the Darien region of Panama and Colombia’s Choco region. No one knows if the Embera migrated to these regions from some other land, but they have lived there for centuries, long before those two nations existed.

Most of Panama’s Embera, some 30,000 people, still live in the Darien Region, which is in the southwest corner of the country. This area is remote, a six to ten-hour drive from Panama City. It is so remote, that the Pan American Highway ends here, at the Rio Chucunaque, in the heart of the region. All travel further south can only be done on foot or by boat.

Panama recognizes seven indigenous cultures, including the Embera, which make up about 13% of the nation’s population of 4 million. Most of these peoples live in comarcas, which are administrative regions where most of the population is indigenous. These regions are similar to an American reservation, except that the boundaries for the comarcas were drawn around the Embera’s original homelands.

But Embera Quera is located in Chagres National Park, just a short drive from Panama City. Many of the indigenous peoples in the comarcas are increasingly leaving their native lands in search of better economic and educational opportunities in the cities, including through tourism. Despite the creeping influence of modern society, these groups continue to hold strongly to their traditional culture and language.

The Panamanian government ignored tribes like the Embera for many years, refusing even to recognize them as actual citizens until the mid-1970s. Thus, their language, culture, traditions, and lifestyle were unfettered and are largely still intact.

As we alighted from the boat and made our way into the village, we were greeted by men playing a melody on traditional flutes, drums, scratching guiros, turtle shells, tambourines and maracas filled with local seeds. Chickens and toucans roamed freely around the village. After some tentative, first interactions, our ‘tween daughters were soon playing with Embera toddlers, entertaining them by blowing bubbles.

The homes in the Embera Quera village are raised off the ground several feet to avoid flooding, set atop large posts sunk into the ground. Access is via a sloped log with deep notches to form a ladder. Their roofs are thatched palm fronds and all the joinery is made with local vines. There are no walls. Hanging from the supporting posts inside are hammocks, clothing, baskets, pots, mosquito nets, bows and arrows, and other items. The kitchen is built on a clay platform that supports a fire made from a tripod of sturdy sticks, which hold cooking pots above the flames.

Inside one of the local homes, near the hearth that older women were cooking lunch over, a young Embera woman gave a presentation, which was translated by our guide from her native Cholo language to English. She explained how her people had emigrated from the Darien Region to be closer to Panama City to share their culture with travelers and improve their economic situation via tourism. Our guide told us that 95% of the Embera live in extreme poverty, subsisting on about one dollar per day.

After we heard the young woman’s presentation, her mother and aunts provided us a delicious traditional lunch of fried fish and plantains wrapped in banana leaves, along with an array of fresh bananas and local fruits.

Panama was first colonized by Spain when conquistadors arrived there in 1501. As the crossroads of the Spanish Empire, it flourished, until falling prey to attacks by buccaneers of the growing English Empire. Thanks to the California Gold Rush, a French company began building a canal across the isthmus in 1879, but as a result of disease and poor design, the project went bankrupt in 1889. In 1902, the U.S. stepped in, taking control of and completing the Panama Canal. Under the terms of a 1903 treaty, Panama gave the land in perpetuity to the U.S. Moreover the U.S. was allowed to act as if it were ‘sovereign’ in running the canal and the lands buffering it.

One direct impact that America has had on the local peoples was evident in the Embera woman’s clothing. Traditionally, Embera women go bare-chested, but they will don a top when going into the bigger towns, or for guests. These tops were once made from small silver coins and were a sort of dowry handed down by generations of women. Now their tops are made primarily of U.S. nickels or, for some wealthier families, quarters.

The Embera are renowned for their artistic ability, particularly their baskets and carved statues. After lunch, we shopped from products made by various families in the village, including baskets crafted from the leaves of the chunga (black palm). Some baskets are black-and-white, others use vivid natural dyes, and they often contain geometrical patterns or scenes with animals. The best baskets are said to be woven so tightly that they can hold water! There were also statues depicting local animals carved from tagua nuts (a seed from tropical palm trees) and cocobolo (a rosewood.)

When we visited, the men entertained us with traditional music while the women danced in a lunging, circular line. They also performed their traditional celebratory dance, one generally reserved for the completion of a new canoe or construction of a home. As the men continued to play, couples danced together, then brought their children into the dance as well. And our hosts weren’t shy about getting our hesitant girls into the dancing as well.

Our all-too-brief stay with the Embera people concluded with traditional, temporary tattoos made from the black dye of the jagua fruit. They painted liquid from the fruit’s pulp onto our skin in geometric patterns. At first, it is clear, but as it dries it becomes black and the tattoo emerges. Although the tattoos generally last about a week, they made a lasting and welcome impression— as did the memories we took back with us of the noble Embera people. 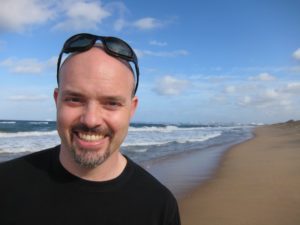 Travel writer ‘Chez’ Chesak is a 20-year veteran of the outdoor and travel industries and the Executive Director of the Outdoor Writers Association of America. While he’s lived all over the U.S. and traveled to more than 30 countries, he has the most fun when he’s exploring with his wife Sally, and two daughters. An avid outdoors person and writer, he’s happiest on a trail, on skis, or nestled into a sleeping bag. He was deployed to Iraq in 2005 with a U.S. Army line unit and you can read more about him at www.chezconnects.com.
Listen to Chez’s interview on World Footprints.
Share
Tweet
Pin
Share