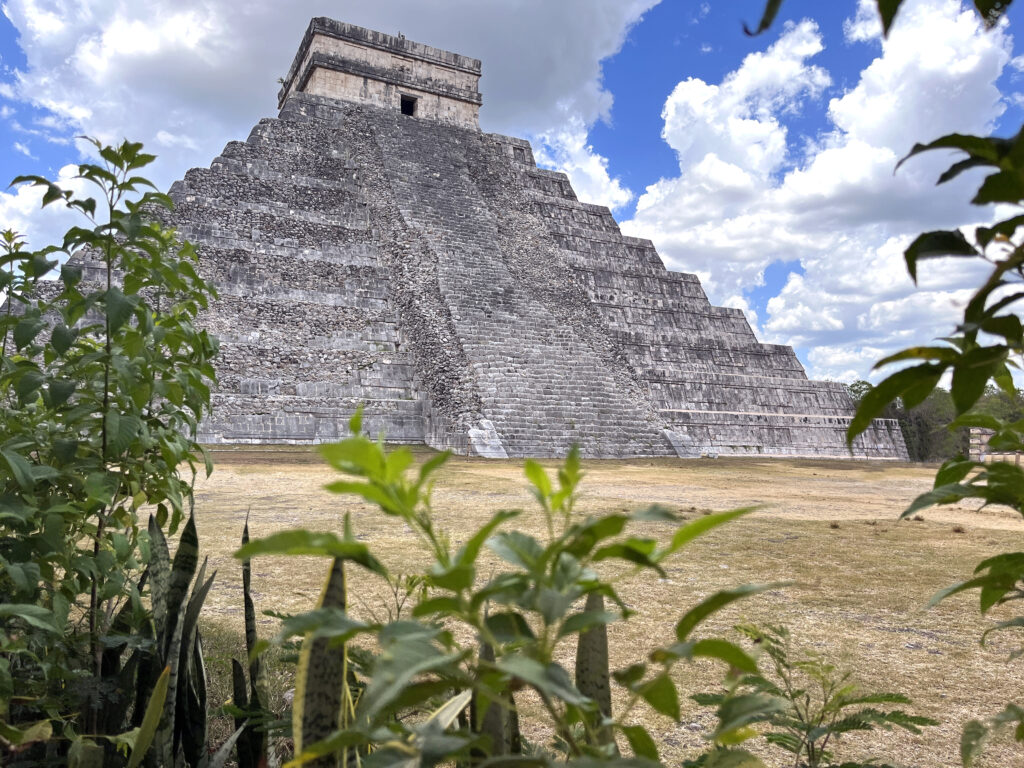 Cancun is a perfect starting point to visit Chichen Itza

Although many people may primarily travel to the Mexican city of Cancun due to its outstanding nightlife and party scene, this place offers an incredible number of tours and day trips. Besides island hopping, scuba diving, or party cruises, the one-day tour to Mexico’s most famous pyramids, Chichen Itza, is a trip to definitely put on one’s bucket list.

Because Chichen Itza is one of the new Seven Wonders of the World, according to UNESCO, this place represents the most-visited archaeological site in Mexico. Logically, heading out to see this place was an obligatory task for me while I was visiting Cancun for a 1-week scuba diving adventure.

Booking a trip to Chichen Itza

Whether or not you are planning to book a trip to Chichen Itza, being confronted with it is almost impossible. From the moment  you step out of the plane and enter the airport, signs, posters, flyers and, most of all, people trying to convince you to go are everywhere. Availability obviously does not present a concern.

However, do not make an impulsive decision at the airport. As I often do, I listened to a few offers and went based on my own research once I reached my hotel. There are no great deals at the airport! I decided to take the full-day bus tour that even came with lunch, as well as two extra stops in both the city of Valladolid and one of the nearby Cenotes. Depending on the company offering this trip, prices ranged between $45 and $60 US, not bad at all for what is offered.

The way to Chichen Itza

At around 5:15AM, I got picked up by the bus, which collected customers all along Cancun’s main street, also known as the “Hotel Zone.” The bus kept going, stopped, kept going, and stopped again for about one more hour before we even left Cancun. This made it impossible for me to sleep. Once the city borders were passed, the tour guide made his introduction, gave us a rough outline of the day, and let us sleep for a little longer (yes, it was now possible).

The overall ride took about 3 hours and was quite pleasant. The bus had air conditioning, streets were in good condition, and occasionally, the tour guide served us with a nice mix of facts and a funny attitude. At around 10:30 AM, we stopped at the official bus parking area. As we left the bus, we were split into smaller groups. We were told we had to stick with our designated tour guide. It was already extremely hot, so grabbing lots of water was highly recommended. As we were hanging out in small groups, our tour guide handed us tickets.

Just as we began, my tour guide told me I could not take my camera equipment. I was confused and asked what that meant. If I had done more research, I could have found that information, but I didn’t think this was the kind of trip where I had to expect something like that.

Apparently, it is not allowed to bring any professional camera gear into the site of Chichen Itza without a permit from the INAH (Institute of Anthropology and History). So, none of the things I depended on most were allowed. My big DSLR lenses, my tripod, even my GoPro. None of it was allowed. Such a frustrating situation for a photographer! Luckily, modern phones are at least well capable of taking decent pictures…

Of course, I never believed I would have the place all to myself, but I did not anticipate such an enormous number of people and souvenirs. The walkway towards the main area of the pyramids looked like a summer fair.

Everyone wanted me to check out their stuff. Since I had to figure out how to get the best pictures of the place without my camera gear and the fact we only had 120 minutes inside Chichen Itza, I ignored all attempts to lure me to one of the souvenirs stands and quickly made my way into the open area in the centre of the historical landmark.

Luckily for me, most people were seeking shelter from the sun underneath some of the surrounding trees. This gave me just enough time to snap some great images with my phone and a timer. After only a few minutes, I was satisfied with my pictures and slowly made my way back to my group, which followed the tour guide in an exemplary manner.

The history and local stories

For those not interested in taking specific pictures but more in the history of the place, I highly recommend staying with the tour guide. Not only do they tell impressive stories from a long-forgotten past, they also spice it up with knowledge most likely only locals have. From cruel ceremonies of the ancient Mayans to creepy ghost stories, there is something to listen to for everyone.

The by far best benefit of staying with the guide is they point out specifics about the pyramid’s architecture that otherwise would go unnoticed. Make sure to not focus too much on the pyramid and architectural structures only! The surrounding nature holds lots of surprises as well. More than once I spotted large reptiles, such as wild Iguanas.

Time is precious at Chichen Itza

On one hand, the tour really offers a lot for the relatively cheap price. On the other hand, the constant rush can be stressful, especially for those really interested in taking quality pictures or just enjoying the place. After only 120 minutes inside the Chichen Itza pyramid area, we were rushed back to the bus and subsequently escorted to cool-off inside the water of a nearby Cenote. This place was also where we were served food in the form of a rich buffet. The issue here was figuring out the logistics.

With our short timeframe, it was quite challenging to decide whether to eat first or descend into the cave. Since these tours seem to all follow the same time schedule, most people arrive at the Cenote in the early afternoon, meaning the sun is already about to set. Therefore, I recommend going in the water first. If I had decided to eat first, the sunlight inside the cave would have been gone already.

A tour worth taking

Aside from the obvious downsides of such a typical tourist tour, it is definitely worth spending money on this daytrip. Just think about what you want before getting on the bus and be quick in making decisions so you can maximize your experience. The day will be long, but full of amazing experiences.